The incident happened on Interstate 35 at mile marker 65 near the town of Cotulla. That would be located nearly seventy miles into Texas. A border patrol agent became suspicious of the cloned vehicle while he was following it, Border Patrol Agent Hector Garza told Breitbart Texas while acting in his capacity as president of the National Border Patrol Council, Local 2455. After stopping the suspicious vehicle the driver was arrested and the agent found 12 illegal aliens stuffed inside the Chevy Tahoe that had been painted with Border Patrol vehicle markings.

“This shows the level of deviousness and desperation these smugglers will stoop to in order to deliver their cargo,” Garza said in an interview with Breitbart Texas. “They will not stop. Whether they are smuggling drug, humans or terrorists, to them it is just about the money.” 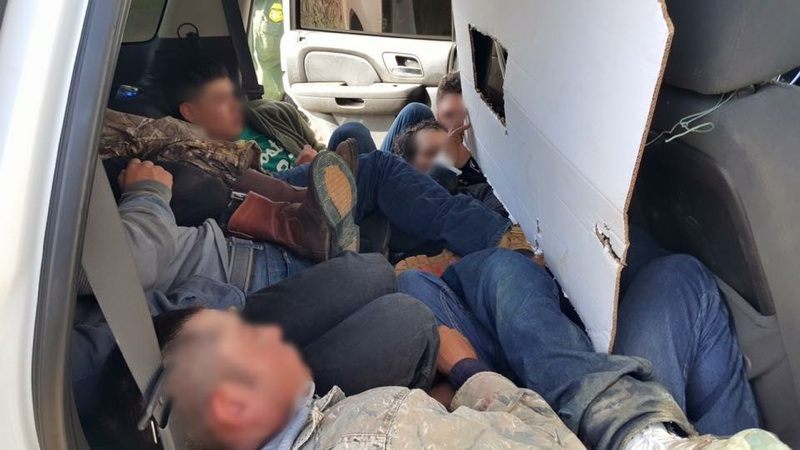 Garza said the 12 illegal aliens stuffed in a Tahoe shows the total disregard for human life these smugglers show towards the people they haul. “If this vehicle had become involved in a high-speed chase, it could have been catastrophic.”

The vehicle was painted to look like a Tahoe regularly used by the U.S. Border Patrol. It did not have any overhead lights normally found on the vehicles. It did; however, have a light bar mounted on the dashboard and the rear view mirror had been removed. It appears the rear seats may have been removed in order to stuff more people into the vehicle.

The cloned vehicle was stopped before reaching the Border Patrol station which is located north of Cotulla. The stop of the vehicle and subsequent arrest of the driver took place on Friday.

Note: This article has been updated with additional information.