Even before the recent NAEP results were published, Common Core proponents urged us not to engage in what they called “misnaepery” – or, jumping to unsubstantiated conclusions based on preliminary data.

Some were reasonably cautious, others were not beyond presenting visually misleading data to prop their claim that nothing has changed (in these charts, for example, the author draws NAEP with a 50 points/grid, where 10-12 points equal a grade level; in other words, it takes 4-5 grades difference to move the chart one grid. Small wonder the NAEP charts look flat there.)

Common Core was produced in 2010 and before the end of that year most of the states adopted it, some sight unseen. Some states, like Kentucky, started implementing Common Core right away, while in other states the implementation was slower and took off a year or two later. By 2012-13 almost all Common Core states were deeply engaged in its implementation.

Education standards take time to implement and have an impact. Typically, one expects 2-3 years for implementation of standards to complete, by which time their effects can start to be gleaned. This time is about now, and is already past for early implementation states. I live in California, and some of the data below is California–specific. I shall focus on mathematics, the area of my expertise.

The recent 2015 NAEP results showed a first ever significant decline of 2-3 points – about a quarter of a grade-level worth – in mathematics at both grades 4 and 8, and in grade 4 reading. The decline was broad and deep in most states with just a handful of exceptions, and even formerly excellent states like Massachusetts were not immune. But NAEP scores are only the most recent sign of decline.

Further, Common Core eliminated teaching of Algebra in many middle schools in states where they were adopted. Supporters argued that they will offer acceleration to Common Core’s slowed-down progression, where needed. Yet recent NAEP data shows that nationally, teaching Algebra in grade 8 dropped from 33 percent to 29 percent, the first drop in ten years.

Common Core damage to states like California, which previously had more rigorous standards than Common Core, is much more pronounced. Algebra enrollment in grade 8 dropped by almost half in two years, from 54 percent in 2013 to 28 percent in 2015. 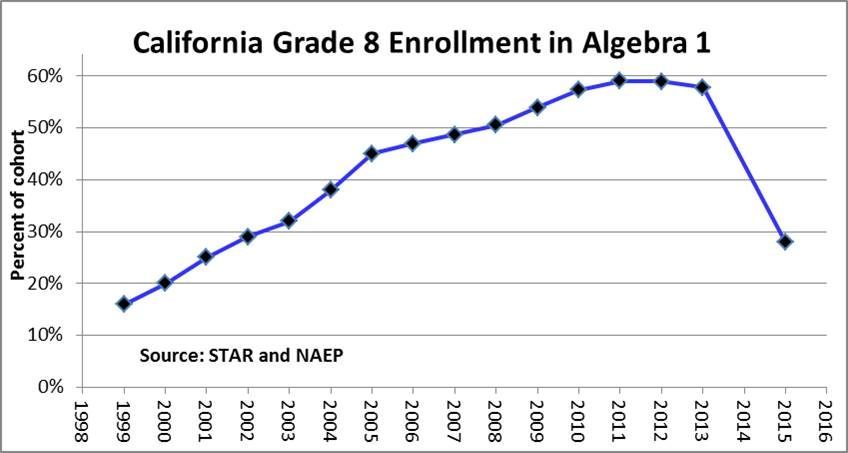 Finally, the new California “college-readiness” based on the Smarter Balanced test has shown itself to be fake. It declared more than twice as many students as before ready in math, and three times as many as before conditionally ready in English Language Arts. Such huge swings in readiness do not happen overnight. They simply show that the Common Core based test is worthless and offers meaningless measure of college-readiness, yet the California State University system is now forced – by law! – to accept such students without placing them into remediation.

Common Core was sold to us on the promise that it will prepare more students for college and for careers in STEM (Science, Technology, Engineering, and Math). Instead, we see a drop in college readiness as visible on ACT and SAT, and that Smarter-Balanced college-readiness is a meaningless measure. College department chairs in Kentucky, which is said to have the longest and most exemplary implementation record of Common Core, recently complained that placing incoming students “into courses for which they have not met prerequisites can only lead to either lower educational standards or increased failure rates.” We also see a large drop in early algebra taking that is bound to translate into a drop in success with calculus, a necessary prerequisite for STEM careers.

Common Core defenders argue that it is still too early to judge, that the jury is still out on Common Core’s effects, and that the broad national decline on NAEP may still show itself to be transient. That would be true if it was NAEP only. Yet all the data we have – from ACT/SAT, through AP course taking, through early enrollment in algebra that was the hallmark of US improvement in the last two decades, and to the NAEP scores – all point one way: down. I couldn’t find a single piece of objective educational data that looks improved or at least hopeful, beyond anecdotes of teachers being “very excited” about Common Core.

When the Food and Drug Administration runs drug trials, it realizes that sometimes sufficient data will show up during the trial, and the experiment will need to be cut short because evidence of the dangers it presents to human subjects will emerge early. The FDA calls this a “stopping rule” and recommends that human experiments have such rules specified in writing ahead of launching the trial. Common Core is a human experiment done on a massive scale on American children, undertaken without any field trials or strong research support.

Shouldn’t we have some kind of “stopping rule” for it as soon as significant evidence of the damage it inflicts emerges? Shouldn’t we start considering reversing course now that early data is in and all of it points in one – wrong – direction? Or should we unnecessarily condemn many more millions of children to an uncontrolled education experiment whose ill results are already clear to see?

Ze’ev Wurman is former senior policy adviser with the U.S. Department of Education under President George W. Bush and a senior fellow at American Principles Project.