The climate alarmists have come up with a brilliant new excuse to explain why there has been no “global warming” for nearly 19 years.

Turns out the satellite data is lying.

And to prove it they’ve come up with a glossy new video starring such entirely trustworthy and not at all biased climate experts as Michael “Hockey Stick” Mann , Kevin “Travesty” Trenberth and Ben Santer. (All of these paragons of scientific rectitude feature heavily in the Climategate emails)

The video is well produced and cleverly constructed – designed to look measured and reasonable rather than yet another shoddy hit job in the ongoing climate wars.

Sundry “experts”, adopting a tone of “more in sorrow than anger” gently express their reservations about the reliability of the satellite data which, right up until the release of this video, has generally been accepted as the most accurate gauge of global temperatures.

This accuracy was acknowledged 25 years ago by NASA, which said that “satellite analysis of the upper atmosphere is more accurate, and should be adopted as the standard way to monitor temperature change.”

More recently, though, climate alarmists have grown increasingly resentful of the satellite temperature record because of its pesky refusal to show the warming trend they’d like it to show. Instead of warming, the RSS and UAH satellite data shows that the earth’s temperatures have remained flat for over 18 years – the so-called “Pause.”

Hence the alarmists’ preference for the land- and sea-based temperature datasets which do show a warming trend – especially after the raw data has been adjusted in the right direction. Climate realists, however, counter that these records have all the integrity of Enron’s accounting system or of Hillary’s word on what really happened in Benghazi.

Given the embarrassment the satellite data has been causing alarmists in recent years – most recently at the Ted Cruz “Data or Dogma” hearing last December – it was almost inevitable that sooner or later they would try to discredit it.

In the video, the line taken by the alarmists is that the satellite records too have been subject to dishonest adjustments and that the satellites have given a misleading impression of global temperature because of the way their orbital position changes over time.

These sound plausible criticisms till you look at this graph provided by one of the scientists criticized in the video, John Christy of the University of Alabama, Huntsville. 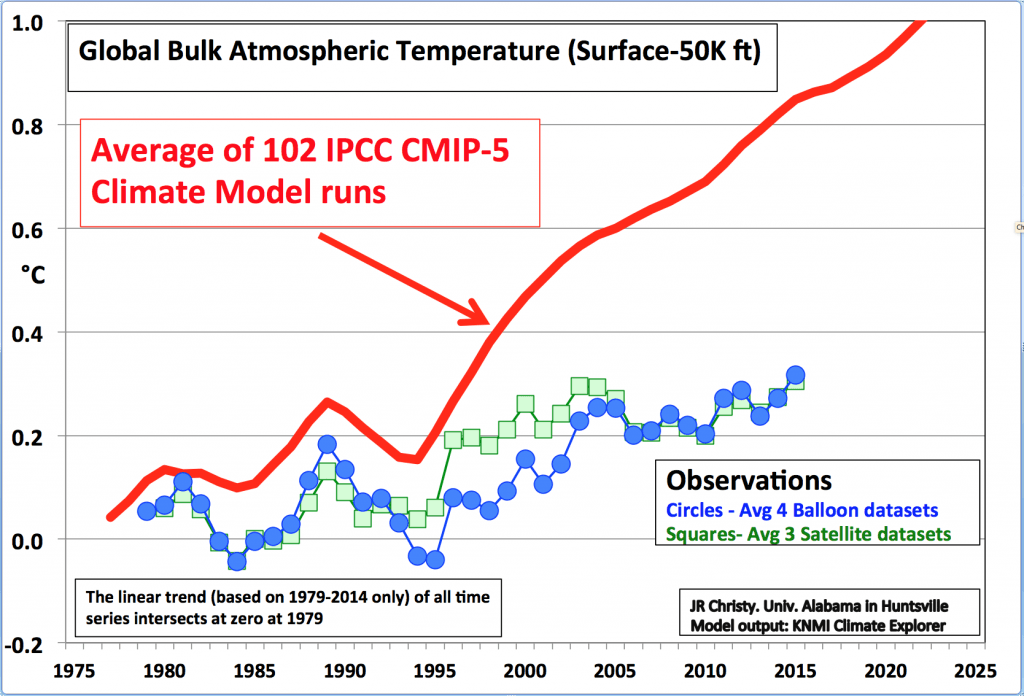 What it shows is how closely the satellite data corresponds with measurements taken using a completely independent system – balloons. If the satellites are lying then so are the balloons.

There are too many problems with the video on which to comment, but here are a few.

First, the satellite problems mentioned here were dealt with 10 to 20 years ago. Second, the main product we use now for greenhouse model validation is the temperature of the Mid-Troposphere (TMT) which was not erroneously impacted by these problems.

The vertical “fall” and east-west “drift” of the spacecraft are two aspects of the same phenomenon – orbital decay.

I’m impressed someone went to so much trouble and expense.  The “satellite data” must be a real problem for someone. Do we know who financed this video?

Yes, we do. It was made by the Yale Climate Connection and part funded by the Grantham Foundation. The Grantham Foundation is the creation of a UK born US based hedge funder called Jeremy Grantham (and his wife Hannelore) and has since 1997 been at the forefront of promoting climate alarmism.

Among the beneficiaries of Grantham’s green largesse are Lord Stern — author of the heavily discredited Stern Report, now with a cosy sinecure at the Grantham Institute — and Bob Ward, a failed paleopiezometrist and crop-headed pit bull impersonator who is lavishly funded to write angry letters to newspapers and other institutions explaining in boring detail why climate change sceptics are evil and wrong.

As for the motivation behind this well-funded smear video – it’s actually explained at the website which is promoting it.

In coming days, we will hear announcements from NASA, NOAA and others that 2015 was the hottest year in the modern instrumental record.

There will be pushback from the likes of climate denier Ted Cruz, who uses a misreading of satellite temperature data to claim, as he did on Seth Meyer’s show – “no warming in 18  years”

This is the story of how that distortion came to be.

In other words it’s yet another case of the increasingly desperate climate alarmists playing their usual game:

If the facts don’t suit your discredited theory, change the facts.