Caravans of coach buses carrying families from all over Italy streamed into Rome Saturday, meeting in the enormous Circus Maximus. It was a gathering in support of the traditional family, in opposition to a new bill aimed at giving legal recognition to homosexual unions and adoption by same-sex couples.

Over one million people filled to overflowing the biggest sports arena ever built to demonstrate their disapproval of the Cirinnà bill on civil unions and voice their belief that children have a right to a mother and a father.

The immense field started filling during the morning in preparation for the event’s kick-off at 2:00 p.m. Countless families with children, strollers, and baby carriages in tow joined the throng on the warm, overcast Saturday.

Some carried large banners or flew flags, while others sang songs and improvised dances. Above the stage, set up at the bottom of the square, a blue banner that read “Family Day: In Defense of the Family and Children” was hoisted.

The organizers of the event had already forecasted that the number of demonstrators would exceed a million, based on calculations from the numbers registered for the occasion and transportation previsions. A half-hour into the event, organizers announced over the microphone that the crowds had reached the two million mark, which was met with sustained applause.

The gathering had the full support of the Catholic Church, but was organized by lay organizations, rather than the hierarchy. Countless civilian associations and movements, such as The Standing Sentries, the Catholic Alliance, Communion and Liberation, Science and Life, the Neocatechumenal Way, Renewal in the Spirit, the Movement for Life, and the Family Forum all showed up with sizable numbers of members.

The spokesman for the event, Massimo Gandolfini, said there would be no slogans against Prime Minister Renzi, who has been an outspoken advocate of gay unions and a vocal supporter of the Cirinnà bill. Renzi’s center-left Partito Democratico, in fact, was the party that proposed the legislation.

Gandolfini said that in place of political policy questions, the focus of the event would be on the importance of mothers and fathers for healthy families and a healthy society. This included testimonials from a number of families, including large ones, interspersed with musical performances.

Despite his declaration, however, politics was very much in evidence at the event, and dozens of members of Parliament showed up to lend their support to the demonstration.

Many of those of the new center-right, including Senate leader Renato Schifani and representatives from the Northern League and Brothers of Italy, were present, as were members of the Forza Italy party. Even the Partito Democratico, whose Senator Monica Cirinnà is the sponsor of the bill in question, was in attendance.

The president of the Lombardy Region, Roberto Maroni, not only came to Rome for the event, but also had the Pirelli Tower lit up with the words “Family Day.” 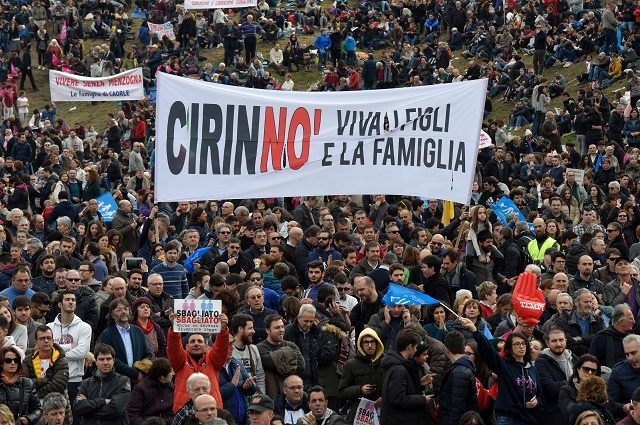 “This square doesn’t want to wage war on anyone and we are not against anyone,” Gandolfini announced to the crowds from the stage Saturday. “There are so many families here, believers and non-believers.”

“The family cannot be the last and most neglected institution,” Gandolfini added, “because it is the family that holds our society together.”

A hacker group known only as “Anonymous” briefly hacked the event’s website the evening before the demonstration, covering the homepage with the banner “Stop Homophobia. Love is Love.”