A lawsuit filed on September 26, 2015 in Washington D.C. (and its eventual outcome) may turn out to be the most important event of the 2016 presidential election.

Virtually ignored by all but a handful of alternative media outlets, this suit has the power to destroy the existing political power structure ─ much like the ridesharing firms, Uber and Lyft, threaten the antiquated taxi industry. If successful, it will permanently expand the number of candidates on the debate stage during the general election by proving that the Commission on Presidential Debates is in violation of current anti-trust law. Politics is not just free speech; it’s also big business.

In a nation that prides itself on choice, with endless varieties of almost anything imaginable, why are we limited to hearing from just Republicans and Democrats when debating our nation’s future? The reason is that you, as a citizen, are being subconsciously herded under the guise of “preventing confusion.”

Libertarians, Greens, Reform, Constitutional, and Independents are allowed, to a point, to voice their issues, but the most important qualifier has always been the official debate stage. Inclusion on this stage is, in effect, the social proof that says to the American voter: this candidate is for real and should be considered.

National debates, being the most important forum to present a candidate’s ideas to the American voter, have the most restrictive qualifiers for inclusion. These qualifiers are conveniently set by Republicans and Democrats masquerading as unbiased arbiters. These biased members are deciding the rules, rather than using an independent organization like the League of Women Voters, because they fear competition.

The existing debate rules state that a presidential candidate must “have a level of support of at least 15% (fifteen percent) of the national electorate as determined by five national public opinion polling organizations selected by CPD, using the average of those organizations’ most recent publicly-reported results at the time of the determination.” This 15-percent hurtle leaves out important criteria, such as how polls should be worded, which polling organizations will be used, and when these polls should be taken. Cherry picking polling companies and adjusting the timing are just a few ways to tilt the outcome.

More significant to the discussion is that the Commission fails to address the most vital element, which is that polls are becoming increasingly unreliable each year in the cell phone age. Polling has become so untrustworthy that renowned pollster, Gallup, is getting out of the presidential polling business because it admits it can’t get accurate results. If an organization such as Gallup is throwing in the towel, then the reliability of every poll is in question.

In the 2012 election, Libertarian Gary Johnson and Green Party candidate Jill Stein were not included in approximately 90 percent of the popular polls. Most of the time, these polls used “none of the above” or “someone else” rather than disclosing their names, even though they were listed on the ballot. The average voter would be hard pressed to find any poll that covered third parties in any meaningful way. 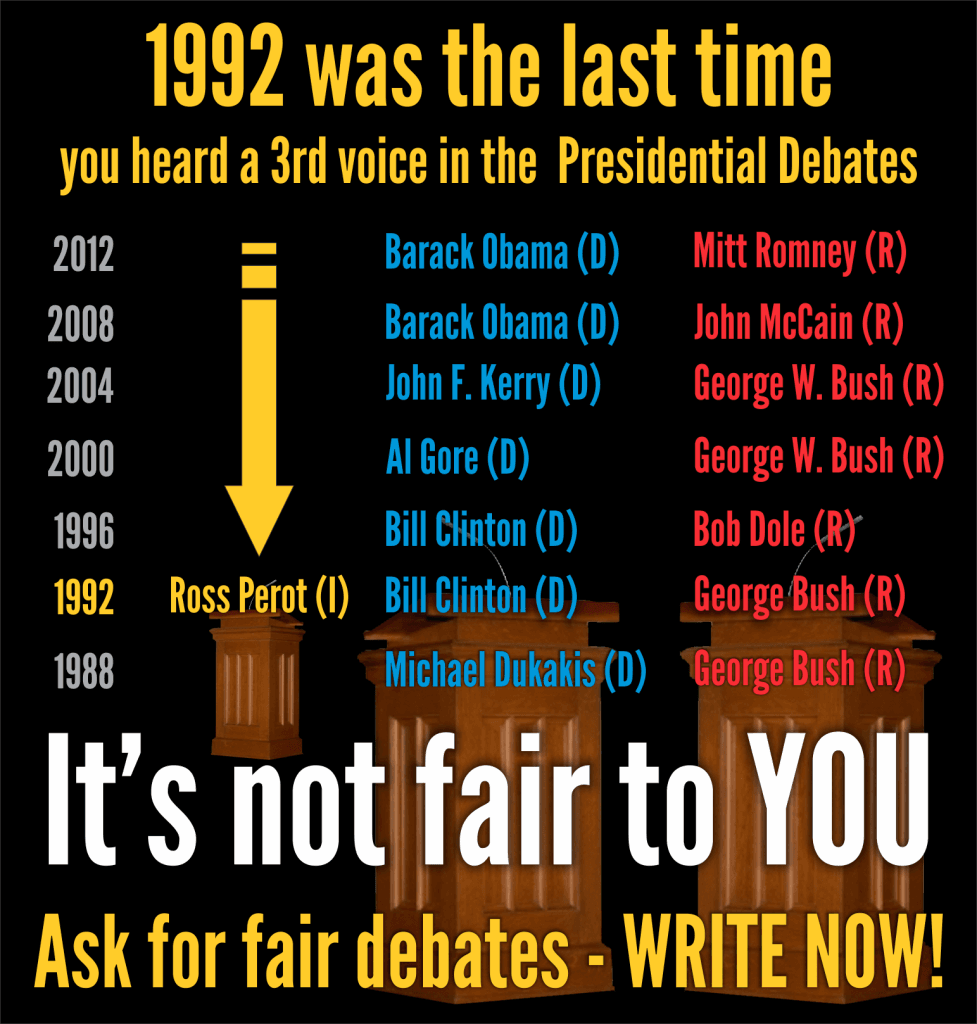 If a candidate is running, but the media is not covering them, are they really running?

Republicans and Democrats may not agree on much, but there is no dispute between them that only their two parties should be competing for Americans’ votes. The political establishments in both major parties do everything within their power to squash nontraditional viewpoints.

Voter suppression is not about a 98-year-old black woman in Mississippi without a driver’s license; it is about restrictive laws (written by Republicans and Democrats) to prevent anyone but their respective parties from ever showing up on the ballot. Numerous ballot access laws act as barriers to entry but are sold to the public as a way of bringing order and preventing confusion. It sounds fair but, in reality, is far from it. This lawsuit hopes to rectify some of these injustices.

The same common excuses that are routinely given are conveniently overlooked when the primary field is crowded with establishment candidates. The first few Republican debates had 10 candidates on the debate stage at one time; the latest one had four. So much for that “confusion” excuse. The Republican primary season has proven that the public, the moderators, and the audience can handle multiple candidates. The reasons given in the past have been exposed to be nothing more than a political red herring.

The book Freakanomics makes it clear that money means less than people think, especially when there are more than two candidates on the ballot. Jeb Bush, despite burning through $130 million dollars on his campaign, has nothing to show for it. In a race with three or more candidates, the influence of cash decreases exponentially for the two larger candidates. Media coverage, above all else, drives the election. The 24/7 Trump coverage has trumped even the big money insider machine; just ask Jeb. How could any candidate, no matter how wealthy, afford ad buys equal to the hours upon hours of free and incessant analyzation by talking heads in media?

Much like Coke and Pepsi control the shelf space at the supermarket, the two main political players operate to stigmatize, marginalize, and discredit anyone but themselves. Now that it appears Trump may have locked up the nomination for the Republican Party, insiders are looking at ways to mount a third-party run–and are coming to realize that their own rules have made it next to impossible to win. The irony is that their rigged system is backfiring as they scramble for some means to run a possible alternative candidate of their own.

The recent decision by candidate Bernie Sanders to run as a Democrat, rather than a Democratic Socialist, was made primarily because both major parties would have never allowed him to participate in the final debates, even though his supporters currently number in the millions. He knows the election game is rigged and has said so repeatedly throughout the years. His ultimate decision to work within the Democrat party, rather than go it alone, is just further proof that the deck is stacked against outsiders.

What is so wrong with offering the American people another choice─having outside candidates sharing the stage with Republicans and Democrats? Ultimately, it comes down to the issue of control by the behind-the-scenes power brokers. The smaller the number of choices, the easier it is to control the game.

What would happen if the anti-war left are presented with an alternative to war hawk Hilary Clinton? Where do free market capitalists go when Donald Trump backs ethanol and high tariffs? What happens when voters go to websites like isidewith.com and find out that who they side with is not even a Republican or a Democrat? The answer is, quite frankly, sheer panic amongst the political class.

The presidential debate lawsuit, if successful, will rewrite the political playbook going forward and seriously impair the political establishment’s ability to suppress third parties from gaining greater exposure. Most voters are already considered to be Independents, and the expansion of coverage from the national televised debates will hopefully reengage the 50 percent of the population who choose not to vote each election cycle. Dissatisfied with what is being offered from the major parties, the appeal of Libertarians and Greens, in particular, looks more attractive by the day. This year will likely show record turnout for these parties’ candidates. The true risk to the political establishment is that a defection of just a handful of former Republicans or Democrats could shift the political balance of power in ways no computer model has ever considered. The question now is:  just how many traditional voters will make the leap to a third party?