There they stood, groveling before Barack Obama with their words, but making the case for Donald Trump with their downcast eyes and painfully wrung hands. 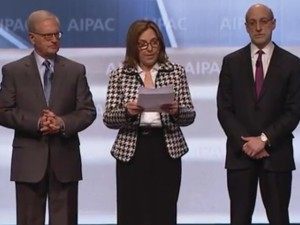 The leadership of the American Israel Public Affairs Committee (AIPAC) offered their abject apology Tuesday to Obama for allowing Trump to criticize him the day before — and, worse, for the spectacle of AIPAC’s members applauding him.

AIPAC’s apology was worthy of a Soviet show trial, or a scene from Mao’s Cultural Revolution — and appropriately so, for at that very moment, Obama was in Cuba, doing the wave with Raúl Castro.

Did Obama apologize to AIPAC for indulging that Israel-bashing, Hezbollah-supporting regime? And is it any wonder millions of Americans prefer the brashness of Trump, or the boldness of Ted Cruz, to such humiliation?

Notably, AIPAC did not apologize to Trump for Hillary Cilnton’s speech earlier on Monday. The former Secretary of State ripped The Donald as a bigot and a bully, charges stemming partly from his proposal to bar all Muslim immigration and visits to the U.S. temporarily. It is a policy embraced, albeit in error, by the vast majority of GOP primary voters, and is at least understood by the rest.

Let us ask an uncomfortable question, since AIPAC is rightly fond of touting Israel’s achievements: How many Syrians has Israel admitted into the country — not for temporary medical help, which the Jewish State admirably provides even to those raised to hate it, but for permanent residency?

Answer: Israel refuses to allow Syrian masses to resettle in Israel. Because Israel wants to survive.

One is tempted to conclude: Thank God the defense of Israel is not left to the likes of AIPAC’s leadership — so weak, so petrified before power, so ashamed of their own existence.

One half expected them to beat their breasts in sorrow. They would turn the holiday of Purim (or “Pure-im,” according to Hillary Clinton) into Yom Kippur, atoning for the very fact of Jewish survival.

But to condemn all of AIPAC would undermine the good work it does to maintain strong ties between the United States and Israel. Much of the heavy lifting is done by the thousands of AIPAC activists — the volunteers, Jewish and otherwise, who love Israel and who feel privileged to participate in the American political system by educating their elected representatives about the issues at stake.

It is to those activists that the AIPAC leadership should be apologizing — not for Trump, but for their own complete failure to prevent the disastrous Iran nuclear deal.

Fighting that deal, AIPAC’s Howard Kohr declared last year, was the purpose “for which AIPAC was built.” It failed, because he and others trusted Obama. Yet there he was onstage Tuesday, apologizing pitifully for Trump’s courage.

Not as if Obama cared. He was watching baseball in Havana while dozens lay wounded and dying in Brussels, including Americans.

AIPAC’s so-called leaders are more concerned with representing the government to the people than the people to the government. In their refusal to be citizens instead of subjects, they are expanding the leadership void that Trump lives to fill.

They, and Washington, deserve him.