This year Americans will collectively give more money to the government in taxes than they will spend on on food, clothing, and housing combined, a new report from the Tax Foundation reveals.

The report shows 31 percent of the nation’s income will go to taxes — $3.3 trillion in federal taxes and $1.6 trillion in state and local taxes: 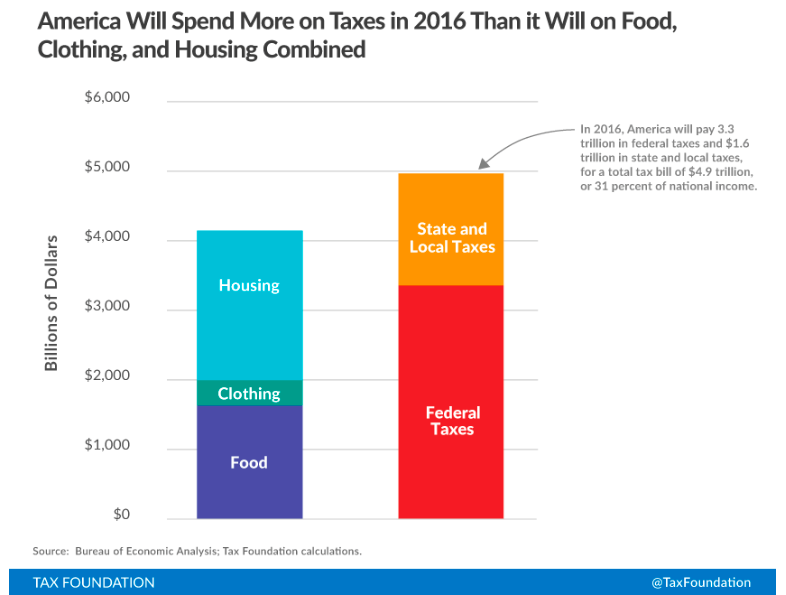 In a demonstration of just how much money Americans will spend on taxes this year, the Tax Foundation has calculated that not only will the bill to Uncle Sam be more than most personal expenses, it will take the nation, as a whole, until April 24 to earn enough to cover the cost.

“Tax Freedom Day gives us a vivid representation of how much federal, state, and local tax revenue is collected each year to pay for government goods and services,” Tax Foundation analyst Scott Greenberg said in a statement. “Arguments can be made that the tax bill is too high or too low, but in order to have an honest discussion, it’s important for taxpayers to understand the cost of government. Tax Freedom Day helps people relate to that cost.”

While the national “Tax Freedom Day” is April 24, the variance among state’s tax burdens mean people living in different states have different “Tax Freedom Days.”  According to the Tax Foundation, Mississippi (April 5), Tennessee (April 6), and Louisiana (April 7) have the earliest “Tax Freedom Days” while New York (May 11), New Jersey (May 12), and Connecticut (May 21) will have the latest.

When factoring in federal borrowing, the Tax Foundation says, Tax Freedom Day would fall 16 days later on May 10.