Perhaps one reason so many American voters tolerate a government drowning in red ink is that the citizens are carrying huge amounts of debt themselves.

Slate took a look at household debt recently, and found that it “remains higher than it was for almost all of postwar history,” despite a significant improvement since the end of the last recession.

Our loads of both mortgage and non-mortgage debt began creeping up in late 2012, and of course student loan debt is blasting into the stratosphere: 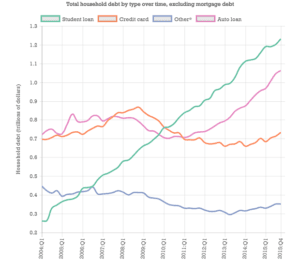 That’s a lot of debt, especially the credit card and student loan figures. Mortgages and auto loans have relatively low interest rates, and they involve assets with considerable intrinsic value. Homes can appreciate in value, and provide useful equity to the homeowner even when they don’t. Auto loans have fixed end points after a reasonable number of years, and the car has trade-in value toward the next purchase. Homes are necessities, and vehicles usually are. If the loans go bad, financial institutions have a chance of recovering the assets.

Much has been written about the student-loan bubble and the skyrocketing cost of college tuition, which is now socially marketed as a necessity, even though it’s not. Credit-card debt has such high interest rates that consumers can make sizable monthly payments without reducing the principal much. Online shopping has opened new pipelines into those high-interest accounts. Answer honestly: how recently did the reader make an online purchase with a credit card that you probably wouldn’t have made, if it involved going to a brick-and-mortar retail outlet, and/or paying in cash?

Credit cards are easier to obtain, at a younger age, with much higher balances, than they were for previous generations. Student debt loads are much higher, and to be brutally honest, the product they purchase is worth much less. One of the great driving forces behind today’s social and political turmoil is the entirely justified anxiety young people feel about paying huge sums of money for degrees that don’t lead into good jobs, even when the degree isn’t in some useless or actively counter-productive subject. (What employer relishes hiring a young person with minimal work experience, whose college education involved learning to hate businessmen and capitalism?)

The problem with this debt load is the extreme difficulty of paying it off, even for people with stable jobs. That average mortgage payment will be well over a thousand dollars, with taxes and other fees included. The car payments on an average $27,000 loan will be over $300 for most, depending on the terms.

The average American household income in 2014 was $51,939, according to the U.S. Census Bureau. Using the crudest back-of-the-envelope math, that means more than half of average monthly income is going into loan payments, especially if it’s a family with two car payments and two student loan payments for the heads of household.

And those are just average numbers, which means a large number of Americans are in much worse shape. A Pew Charitable Trusts report in January found that average household savings are well below recommended levels for coping with emergencies, such as job loss or unexpected major expenses. A large percentage of households had less than one month of emergency income available; for lower-income households, the cushion amounted to less than two weeks. Three to six months’ worth of income in emergency funds is the level recommended by financial advisers.

The Pew report highlighted fluctuations in income as a major cause of this financial instability, but surely high credit balances would play a major role as well. In the good times, high credit balances are accumulated, leading to high minimum payments that mostly disappear into interest. When bad times arrive, those credit balances loom overhead like a mountain.

Many of us seem to be accepting huge loan balances as a fact of life, much as we ignore government debt that consumes hundreds of billions of dollars in interest payments. This sets the stage for revolution, when circumstances force us to confront our debt load… and the burden we’ve ignored for so long suddenly seems bitterly unfair.

The same thing will happen at the government level eventually, on the day when Uncle Sam can’t keep racking up massive deficits, interest on the debt chews mercilessly into general spending, and it finally becomes necessary to shortchange some government dependents in order to pay off others. The consumer debt crisis may well hit first, if an economic slowdown turns the flat income growth of the Obama years into a major decline.

That’s an eventuality welcomed by statists, not feared. When a debt crisis hits, they’ll be the ones offering “relief” by nationalizing credit industries and forcing cramdowns. Debt is an instrument of control in the hands of politicians. It’s no coincidence that making loans easier to get has been a major element of leftist policy, even before they started ramping up the subprime mortgage crisis, and viciously attacking anyone who dared to point out the dangers as a racist monster who didn’t want people of color to have nice houses.

Combine a full-spectrum assault on credit-worthiness as a racist conspiracy, with the transformation of student loans into a government-run millstone that every young person is required to wear around his neck, and the constant demonization of the financial industry that makes it all possible, and you have an impressive battle plan against capitalism.

At its core, capitalism assumes responsibility is a vital component of liberty: we are not free, unless we accept responsibility for our actions. The growing credit crisis will end with government promising to negate responsibility. Those who loaned the money to make so many delightful purchases possible will be castigated as villains, while the statists will offer reductions of their student loan burden as inducements to “vote the right way.” The private sector will be faulted for not offering enough jobs and salary to pay off the student loan burden… by the same people who howl in outrage at the thought of American businesses exerting some control over academic curriculum, to get the kind of employees they really want.

A debt revolt would also help the Left degrade the public’s appreciation for property rights, including loan contracts. Social judgments will replace contract law: those SOBs in the banking industry have made more than enough money from their loans, so they should accept their cramdowns and haircuts in silence.

What cannot continue forever will eventually end. The American credit load is an alarming precursor to crisis. There are many ways to imagine income levels dropping enough to set off the credit bomb, but not many scenarios in which average income surges, borrowing trails off, savings increase, and the debt mountain gets chipped away.

A review of current social and political trends – not just in America, but across the developed world – suggests unsustainable consumer and government debt will end suddenly, and badly, with no good options in sight, and lots of angry questions about why stronger warnings were not issued sooner.