Excited to see The Trump Tour in San Diego yesterday, I really wasn’t expecting huge crowds as it was the start of the Memorial Day Weekend, and this is California after all.  Was I wrong!

I hopped on the San Diego Light Rail heading to downtown, expecting to see quite a few “protesters” (agitators) onboard but was presently surprised to see many Trump supporters.  There was a huge crowd of ROTC students from The Naval Academy and other universities on their way to see Trump that we picked up at the Naval Base Stop.  They’re in town for a month for their summer training at sea and had a free weekend.  As I was talking to a couple of the students on the football team from Annapolis I was thinking to myself, man, these boys are in for quite a day, as I knew we’d be rolling by the agitators in order to get to the Convention Center but I knew it would be eye-opening for them to see and for me as well.  I was also thinking what a contrast in America.  Here you have American patriots not worried about I have the right to do this, or the right to do that, like most pampered kids today, but instead recognizing as young men in society that they have a duty and an obligation to the nation.  Well-spoken, respectful, responsible, they would be seeing the complete opposite later on.

So as we rolled past the “Free Speech Zone” that the San Diego Police Department had set-up for the agitators the first thing I saw was all the Mexican flags and Bernie signs.  I also noticed the Aztlan/Aztec flags flying.  A generation of Mexicans have been taught a myth that the Southwest United States was the spiritual homeland of the Aztecs over 500 years ago.

This is not the case, but that’s a point for another day.  Or just take a Chicano/Marxist Studies Class that we pay for, and you’ll get all of that propaganda first-hand, then you’ll really see why all of those Mexican flags are flying.

It was fairly early so the SDPD had pretty much contained the crowds at that point, so I jumped off at the next stop at the Convention Center wished the students good-luck and headed over to get in the massive line.  There were police in riot gear everywhere, tons of Trump vendors hawking everything from T-shirts to posters with Make America Great Again.  The line  wrapped around the whole venue and this was twenty minutes before Trump was to speak.  Many people had been there celebrating since the early morning.  I chatted with quite a few fellow Trump supporters and it was really inspiring to meet up and see people face-to-face who shared the same values and shared the same support for the nation.  So I get through the very fast-moving line and walk into the venue, a huge cavernous open-aired room, the size of a couple of football fields.  It was loud and packed to the rim.  25,000 plus.  Stephen Miller, one of Trump’s Foreign Policy Advisors was giving a great warm-up speech and the crowd was chanting and ready to roll.

As I walked around, I observed the make-up of the crowd.  Huge amounts of women.  I would say over 50 percent.  Young women and grandmother types, all decked out in red, white, and blue, even some local Blondes for Trump, who had made their shirts for the rally.  Tons of millennials.  I have to admit, I was pleasantly surprised.  There were also many families with young children in attendance.  Many Americans of Asian descent were there, probably 25 percent of the crowd was Asian. There are many Filipino Navy veterans in the area who are Catholic Conservatives and in talking to a few of them, they like Trump’s National Platform.  I saw quite a few Latinos for Trump signs as well.

There was also a large contingent of Chinese Americans for Trump decked out in shirts (mostly women and kids), and many, many, local active duty military and veterans, all with their Veterans for Trump signs.  The young men standing next to me were Gunnery Sergeants in the Marine Corps who came down from Camp Pendleton to support Mr. Trump. 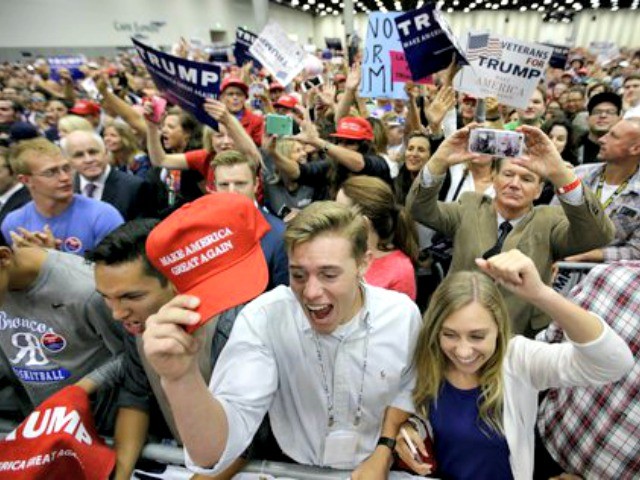 Trump’s speech didn’t disappoint, handing the crowd red meat on trade, immigration, defense, and of course Crooked Hillary, and her e-mails.  Trump and the crowd were thumping with energy.  He’s got a great stage presence, full of stamina, controls the room, and looks very presidential in person.  He spoke for about an hour wrapping it up with saying we’re going to “win, win, win” and he gets everybody cheering and laughing saying “You’re going to say Mr. President, we’re tired of winning,” and he says that’s okay we’re going to keep winning.

At that point, everybody was eager to get outside, and surprisingly most were heading down the street to confront/look at the agitators.  As I walked down with many supporters of Trump, many of them young college-aged and even high school kids with all their red white and blue Trump gear on we’d hear some cowards yell F Trump as they had already walked by.  Some of the guys had some words, and the agitators would yell racist, (the standard, I have no argument phrase).

I get down the two blocks to the “Free Speech Zones” and the police had done a fairly good job of separating the two camps onto separate sides of the street.  I studied the crowd over a ten to fifteen-minute span, this crowd is something you have to see in person, television does it no justice.  Total lowlifes.  I see Hard-Core Anarchists (OWS signs and chanting).  These are bad dudes, Bernie Marxists radicals who he refuses to reign in.  They’re the reason for all this garbage happening on the periphery of the Trump rallies, their faces covered with The Theatre of Pain masks from OWS, mixed in with La Raza (which is a Hate Group that operates under the guise of “multiculturalism” and “diversity”) kids acting like they love the country their parents fled, so we could support them here.  Feel the Bern posters, Donald Hitler signs, Trump’s a Bigot, Aztlan/Aztec propaganda posters, and a big- mouthed woman yelling F Trump over a loudspeaker while that same rap song played.  F the Police, F Trump.  The full gangbanger culture was on full display.  All of this right across the street from where Americans were eating at restaurants and drinking at bars and where families were staying for the holiday weekend at downtown hotels.  Every American should see this face-to-face, and see what we’re going to have to fight.  This is not something that will go away lightly. 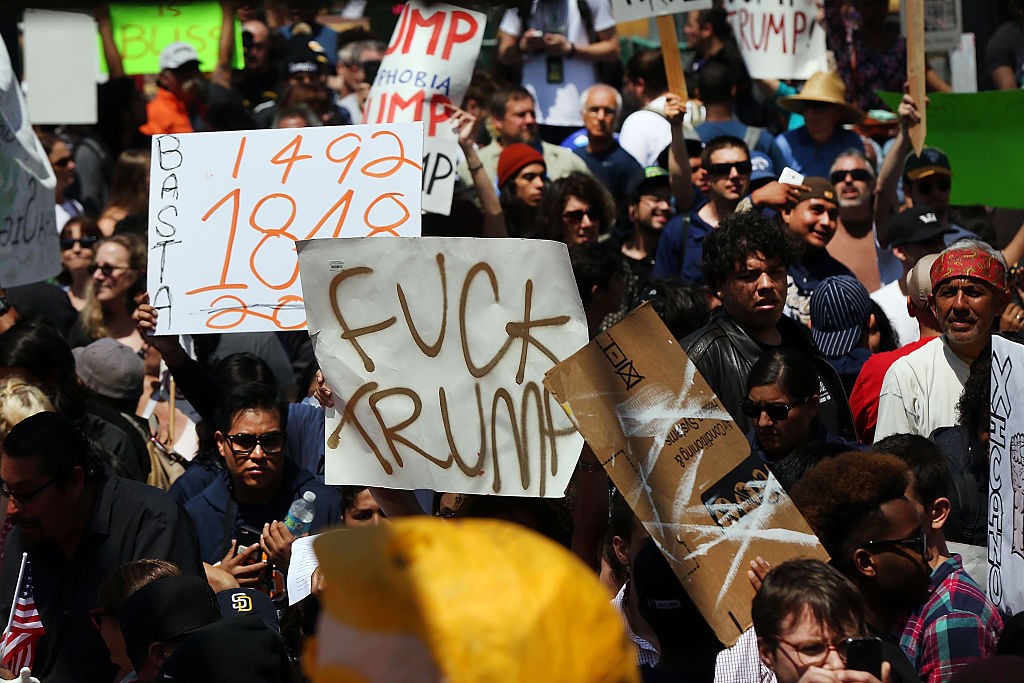 SAN DIEGO, CA – MAY 27: Demonstrators protest outside of an arena where the presumptive Republican presidential candidate Donald Trump is holding a rally in San Diego on May 27, 2016 in Fresno, California. Trump is on a western campaign trip which saw stops in North Dakota and Montana yesterday and two more in California today. (Photo by Spencer Platt/Getty Images)

So I look over across the street and I hear all of this chanting going back and forth, USA, USA, USA.  I get over there and the young Trumpsters, local surfers, twenty-something college kids, and patriots had gone toe to toe with the agitators.  With the media egging them on by having the cameras right on top of them like a schoolyard fight, the anarchists and young Mexicans wearing masks were throwing bottles at them and two police cars, waving flags, and yelling F Trump. I saw a couple of young Trump supporters come out with a few black eyes but they didn’t’ back away.  The police were standing at the end of the street in full riot gear but would not intervene at that point or arrest anybody, even as two squad cars were being pelted by bottles and other things the agitators were throwing.  It was a sequence of yelling face-to-face, fighting, with the cameras hovering all around, then when it got too violent everyone would start running as if they heard a gunshot. 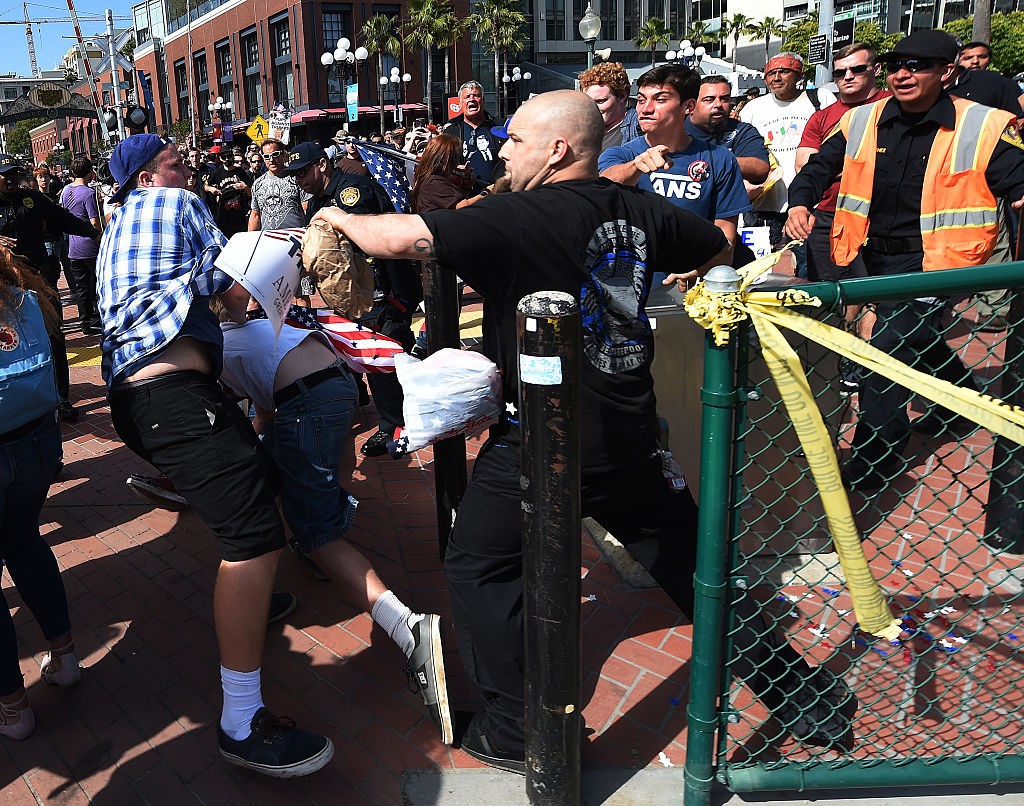 It kept going on and on this way for over an hour, and the Trump supporters finally came out on top because there were just so many more of them and the agitators filtered out, save for a few La Raza sisters who were total thugs who kept yelling F the Police in their face and holding up Mexican flags.  Finally, the cops had to step in and arrest a few of them, but about 100 of them should have been arrested.  There had to have been at least 5,000 SDPD and Sheriff’s Deputies on duty, and I was thinking what a huge cost this is to the taxpayers, especially on a holiday weekend like Memorial Day.  Multiply that by Albuquerque, Costa Mesa, Anaheim and San Diego.  Not good.

As I walked around downtown to see what else was going on after that scene, most of the middle-aged and older Trump crowd had stuck around and were downtown eating, drinking, and socializing, which was good to see but even as they were doing that at outside restaurants, people were walking around waving Mexican flags.  I was hoping people wouldn’t flee because of the thugs and would face everything head-on, and they didn’t, they stayed and enjoyed their day.  After all, it’s their city, they’re the backbone of it and they’re not going to let these thugs run around like they own it.  It was inspiring to see people come together and say enough, we’re not going to be pushed around in our country.

Every patriotic American should see this National Movement first-hand.  Get out and Go! Words don’t justify this movement.  There’s total strength in numbers.  When you’re physically there, it will inspire you, even more, to see what’s at stake and to take our country back.