The wounded warrior campaigning for the Republican nomination for the House seat representing Florida’s 18th congressional district told Breitbart News what Memorial Day means to him.

“To date, in our theaters of war, I have lost 67 friends,” said Brian J. Mast, a retired Army Staff Sergeant, who gave both his legs in Afghanistan. Mast was an Explosive Ordnance Disposal NCO serving with Special Operations Command forces.

The Florida Republican said after his own accident, he felt he needed to keep serving, so he filed to run for Congress to fill the Florida-18 seat vacated by Rep. Patrick Murphy (D.-Fla.), the pro-abortion activist, who defeated former congressman Allen West. Murphy is running for the Senate. 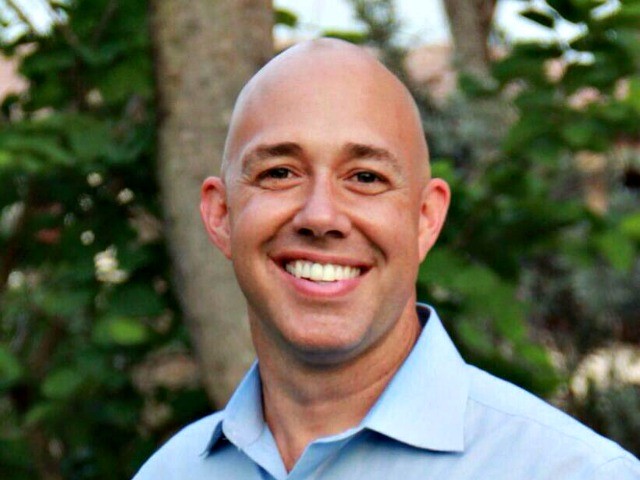 “There is one close friend on Memorial Day that I think of all,” he said. “Lance Vogeler.”

Vogeler was a sergeant first class in the Army Rangers, who turned down an appointment to West Point, so he could continue serving with his fellow soldiers. The 29-year-old had deployed four times to Iraq and was on his eighth deployment to Afghanistan, when he was felled in a firefight.

Mast said Vogeler was killed one month after the blast that took him off the battlefield in the late summer of 2010, and what made it such a shock was how after so many deployments it becomes a routine. “You’re overseas every single year, every single year and you don’t expect it and for him to die on that deployment, it always strikes me.”

The combat veteran, who took a break from campaigning to “walk” at the May 26 Harvard University commencement and receive his bachelor’s in economics, said friends of his were there when Vogeler was killed—but, even though he was not there, when he thinks about it, he always places himself there with his battle buddy.

“He was laying there, bleeding out. There was a mortar that came him and hit right next to him. He knew he was about to die and my friends said his last words were: ‘This can’t happen.’ He was thinking about his wife and his kids and he didn’t want to leave them.”

Memorial Day is not about car sales or the start of summer, he said. It is about remembering the ones who never came home to their own families.

Whenever he visits a veterans cemetery, Mast said he shudders when he hears “Taps” played. “I can’t even say the word ‘Taps’ on Memorial Day. I hear it played on the television or the radio and it will break me down.”

It has become too much, he said.

“I’ve heard it too many times played over a casket of one of my friends with a flag draped across, followed by the crack of the 21-gun salute—that’s what I think about—and more than anyone else, my friend Lance Vogeler.”

Running as a veteran and interacting with other veterans, Mast said he carries the obligation to share with people the experiences he and other veterans have had so that other Americans understand not only the sacrifices but why it is so important to fix the country’s problems in honor of those sacrifices.

Mast said that it hurts the country that only 80 members of Congress served in the military and only 12 saw combat. “Experiences in life absolutely matter—and when you have those experiences—those painful and brutal images branded on your heart, branded on your soul as a result of what you’ve seen in combat that makes your resolve completely different.”

Combat veterans in politics understand what needs to be done to support the military, but they also have a commitment to the Nation that is over-and-above the regular politician, because they have experienced what protecting America costs.

Mast is running against seven other Republicans in the Aug. 30 primary.