“Hillary can show you how absurd the current system is,” Sanders said, noting that the former Secretary of State had “received over 400 super delegates supporting her before anyone else was in the race… That is an absurd system and together we are going to change that system.”

Sanders spoke before 2,500 at the Kaiser Permanente Arena in Santa Cruz, and at Colton Hall in Monterey, where almost double that number turned up. 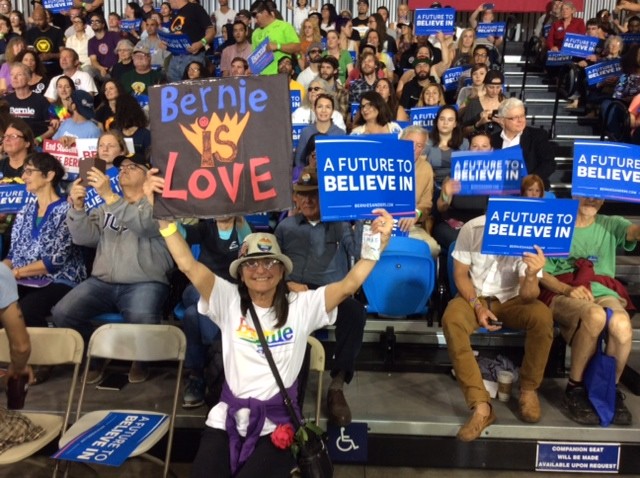 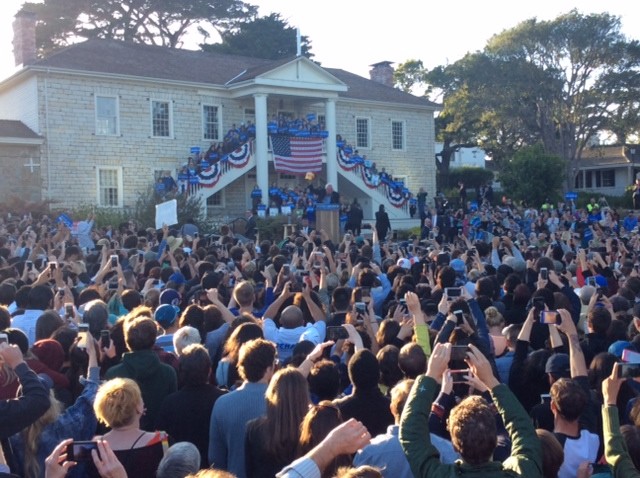 Earlier in the day, California Gov. Jerry Brown had announced his support for Hillary Clinton, citing her insurmountable lead. Sanders, no doubt, had that in mind as he attacked a primary process that made her the leader from the beginning.

Sanders’s sole path to the nomination would be to win California, and use that momentum to push for a change in the Democratic Party system of nominating candidates to force superdelegates to cast their vote for the winner of their respective states. Democratic pollster Douglas Schoen predicted Tuesday that Sanders would attempt such a change.

He reiterated that “the Democratic Party is to be the party of the people, of the working class. You are the future of this country.” He added that it would be the party of ” working people, of young people, of low-income people. We are going to have primaries that are wide-open so everyone can vote.”

Some states hold closed primaries where only individuals who are registered with a specific political party are able to vote for the candidates from that party.

In addition, Sanders said he would do everything in his power to stop Donald Trump from winning in November. “Trump would be a disaster for this country,” he said, later adding that “Donald Trump and all his bigotry is not going to stop our path forward.”

Polls shows Sanders beating Trump by a larger margin than Clinton in hypothetical head-to-head matches. “We beat him by 17 points,” Sanders said. “And if there is a large voter turnout, no question about it, we win. And that means we will not only gain the White House, we will regain the Senate. If you want to defeat Donald Trump, if you want to work with a vibrant, grassroots campaign, we are the campaign to do it.” He said the responsibility of the Democratic National Convention in July will be to ensure that the Democrats have “a candidate who will defeat Donald Trump” and expressed his belief that “no candidate will end up with enough pledged delegates to clinch the nomination on June 7.” Sanders reiterated that “pledged delegates are the real delegates,” and described them as “the delegates you vote for.”

On Wednesday, Sanders will hold a press conference on fracking, a community panel in Palo Alto, and a rally in Davis. Special guests along the way will include Iraq war veteran Rep. Tulsi Gabbard (D-HI) and actress Emily Ratajkowski.