Donald Trump today revoked “the press credentials of the phony and dishonest Washington Post” following a Washington Post headline and an ongoing battle with the paper’s owner Jeff Bezos.

Trump wrote in an online post, “I am no fan of President Obama, but to show you how dishonest the phony Washington Post is, they wrote, “Donald Trump suggests President Obama was involved with Orlando shooting” as their headline. Sad!”

I am no fan of President Obama, but to show you how dishonest the phony Washington Post is: https://t.co/cITm8BPixD

He next announced that he is revoking press privileges at Trump events for the Post, “Based on the incredibly inaccurate coverage and reporting of the record setting Trump campaign, we are hereby revoking the press credentials of the phony and dishonest Washington Post.”

Based on the incredibly inaccurate coverage and reporting of the record setting Trump campaign, we are hereby: https://t.co/THKJwjNkaz

The campaign later released a statement on the decision. 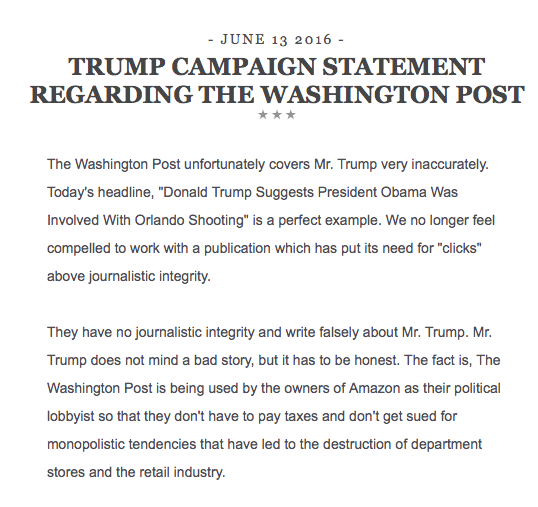 Trump and Washington Post owner Jeff Bezos have been locked in a war of words leading up to Trump revoking the Post’s privileges.

Trump has accused Bezos of using the Post to benefit his ownership interest in Amazon and it’s tax benefits. In a May interview with Fox News’ Sean Hannity, Trump accused Bezos of, “using The Washington Post for power so that the politicians in Washington don’t tax Amazon like they should be taxed.”

The Post reported in May on it’s owner’s words, “But I’m very, very comfortable with all of Amazon’s approaches and behaviors, [such as] the way we pay taxes. The political positions we take are focused on our business, and I think highly appropriate.” The report stated that the Post “had assigned some 20 reporters to produce a biography of Trump.”

Bezos has defended the paper’s ongoing delving into Trump while it does’t appear that the paper has devoted similar resources to investigating Democratic Party presumptive nominee Hillary Clinton.

A Fortune profile of Bezos states, “With the Post, he’s taken a seat at the civic-leadership table.”

“Donald Trump’s decision to revoke The Washington Post’s press credentials is nothing less than a repudiation of the role of a free and independent press. When coverage doesn’t correspond to what the candidate wants it to be, then a news organization is banished. The Post will continue to cover Donald Trump as it has all along — honorably, honestly, accurately, energetically, and unflinchingly. We’re proud of our coverage, and we’re going to keep at it.”