New polling data from Reuters shows a surge in support for a far-reaching temporary ban on any Muslim entry to the United States.

That suggested policy is a much harder line than the temporary ban on Muslim immigration, or the long-term ban on immigration from countries with a history of radical Islam, that have been proposed by GOP candidate Donald Trump.

The finding represents a 22-point swing since the beginning of the month. At the end of May, just 40 percent of likely voters supported a halt, while 54 percent opposed one. 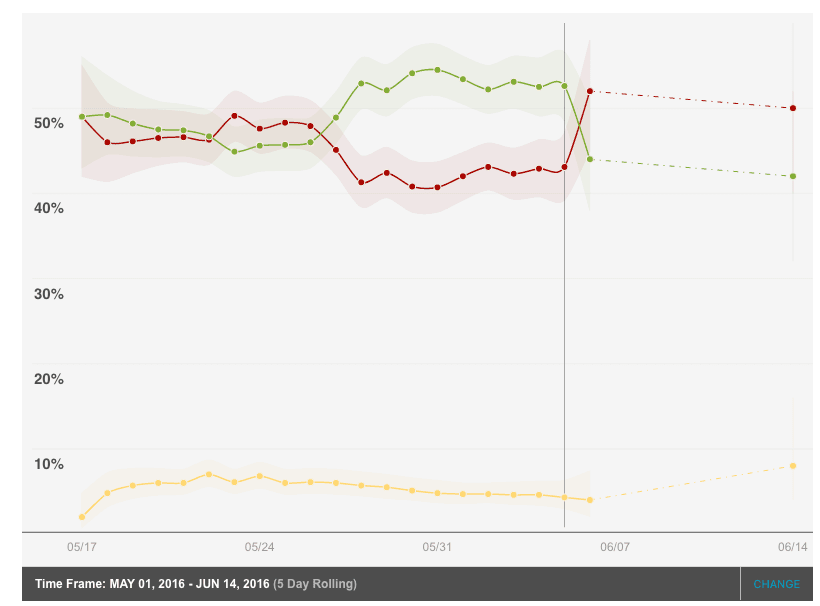 The Reuters survey, it should be noted, is based on a rolling average over the last 5 days. Even though Tuesday’s average shows a surge in support for a ban, most of the interviews on the question were conducted before the Orlando terrorist attacks. This suggests that support for the ban will rising over the coming days as more interviews conducted after news of the attack are included in the rolling average.

In the survey, voters were asked whether or not they agreed with this statement: “The United States should temporarily stop all Muslims from entering the United States.”

Since Reuters first started asking this question in early May, voter sentiment as been fairly evenly divided on the proposal. The week before the terrorist attack, however, public attitudes started to shift against the temporary ban. In addition to the expected opposition from leading Democrats, many leading Republicans, including House Speaker Paul Ryan, had argued against a ban. That trend has been reversed in the wake of the Orlando attack.

In a campaign speech in the immediate aftermath of the Orlando attack, presumptive GOP nominee Trump reiterated his call for a temporary ban, but modified it by saying that immigration should be curbed from countries with a history is Islamic radicalism.

He also focused his criticism more directly on the Obama Administration’s lax enforcement of the nation’s immigration laws. He specifically slammed a proposal by presumptive Democrat nominee Hillary Clinton to greatly expand the number of Muslim immigrants admitted into the country.

PolitiFact, a news site that ordinarily tries to rebuff conservative attacks on the left, admitted that Clinton’s proposal would dramatically increase the number of Muslim immigrants and refugees admitted into the US. Politifact noted, though, that the screening process to accept refugees ordinarily takes 18-24 months, suggesting that the US would be able to maintain national security under Clinton’s proposal.

The site did not mention, however, that the Obama Administration has recently cut the screening time for refugees from the Middle East to just 3 months.

If support for an outright temporary ban on all Muslim immigration is surging, one can imagine voters would overwhelmingly support efforts to at least increase screening of immigrant hopefuls. Even many of those voters who oppose a complete ban would likely not support expanding Muslim immigration in the wake of the Orlando attacks.

British politician Harold MacMillan was reportedly once asked what could blow his government’s plans off course. “Events, my dear boy, events,” he is alleged to have anwered.

The same is true of political campaigns.