The Navy SEAL running for the Missouri GOP nomination for governor opened up hunting season on the combatants for the army of the Islamic State with his own “ISIS Hunting License,” available for a minimum contribution of $10.

Eric Greitens told Breitbart News the idea for the hunting license came from conversations with his friend and fellow SEAL Rob O’Neill, when O’Neill was campaigning with Greitens in the last week of June. “We just wanted to get a very strong message out that we need to bring the fight to ISIS.”

The Missouri-native said O’Neill actually autographed a stack of the licenses for supporters. “You can imagine having ISIS hunting permits signed by the man who shot Osama Bin Laden has been hugely popular. The ISIS Hunting License comes with “No Bagging Limit,” “No Tagging Limit” and “Expires When We Defeat This Evil.” 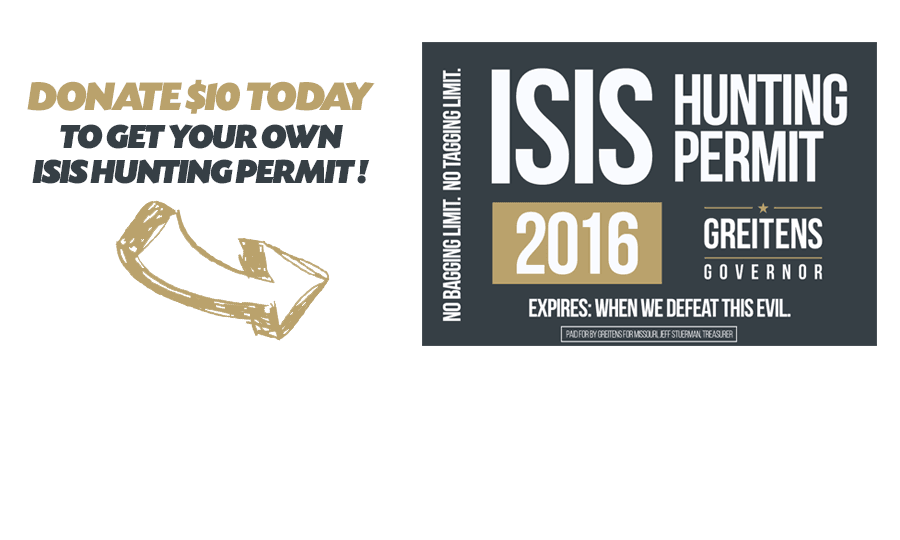 Greitens, who among other deployments, commanded a Navy SEAL Al Qaeda targeting team in Fallujah in 2007, said he was surprised how quickly the permits caught on.

“These things are flying off the website,” he said.

“I’ve just been marching in a Fourth of July parade and we had so many people run up to our team in the middle of the parade: ‘Can I get one of those hunting permits?’ ‘I want to send one to my buddy serving overseas.’ That’s the best thing ever.”

The recipient of the Bronze Star and Purple Heart said people are responding to him because he is a patriot, not a politician.

“My opponents have been involved in 20 different elections,” he said. “They represent the status quo. The people want a patriot. They want a conservative. They want a leader who is going to stand up and fight for them.”

In 2012, Greitens, who grew up as a Truman Democrat, received accolades from the mainstream media for his commencement address at Tufts University. But now that he is a 2016 Republican candidate for Missouri’s governorship, the coverage has turned hostile.

Greitens said his political work flowed from his charitable foundation that started after his team was hit by a Vehicle-Improvised-Explosive-Device in Fallujah. Although the lieutenant commander returned to duty after 72-hours, many of those hit by the blast did not. When he went to visit his shipmates in the hospital, he said he was struck by the fact that everyone he talked to, even those who lost limbs, told him they wanted to report back to their unit.

It motivated him to found The Mission Continues, an organization that helps veterans stay on the grid and continue to serve after their military hitches end, he said.

“We have this whole generation of men and women, who are warriors, who are coming back,” he said. “They took an oath to defend our Constitution. They volunteered for our most excessive most dangerous missions, they took the fight to Al Qaeda and when they came home — what I saw was that too many of them were being broken, neglected and mistreated by our own government.”

“It helps veterans continue to live lives of purpose and meaning and dignity again when they come home and Donald Trump, when he made his donations to veterans, he gave $75,000 donation to The Mission Continues,” he said.