In deflecting that false charge, Trump’s own spokesperson, Katrina Pierson, made an interesting observation: that it has been the Democrats’ strategy all along to associate Trump with violence.

And for that purpose, it did not matter whether the violence was caused by Trump supporters, or by his opponents.

If you go back to the WikiLeaks release of the DNC emails, this is on the PowerPoint playbook on the messaging — slide number 6 — with the messaging theme number 1: Violence.  They were looking for an opportunity to pick up somewhere to continue this narrative that somehow Donald Trump is violent.

Here is the relevant slide, in full. Note the suggestion to tie Trump to “incidents of violence.” 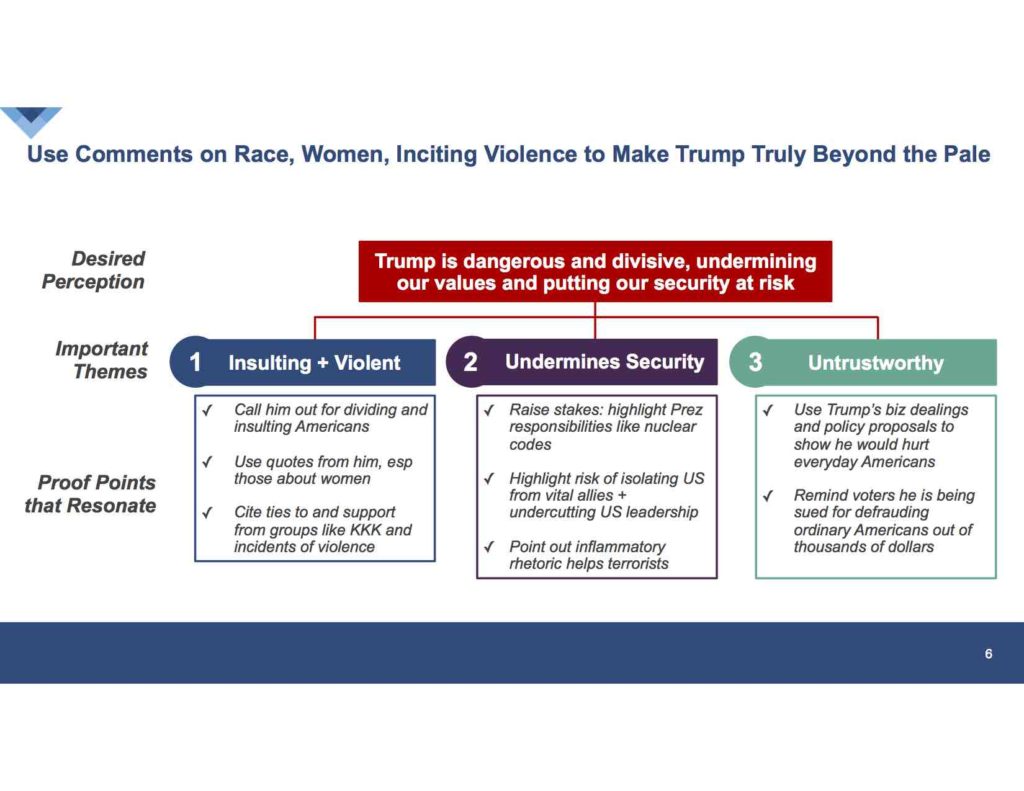 There is no doubt that Trump has played into that strategy with some rather stupid remarks, the worst of which was his offer to pay the legal fees of a supporter who punched a protester. Note, however, that the protesters seem to have done their very best to get hit. One group brought a KKK-style hood to a Trump rally and was attacked by a black Trump supporter.

The worst case of violence was outside a San Jose rally in early June, where Trump supporters were viciously beaten and chased through the streets by a left-wing mob. Despite the fact that the rioters carried out their brutality shamelessly, in full view of the mainstream media, some media outlets blamed Trump for the violence. One headline blared: “San Jose rally turns violent as Trump supporters clash with protesters.”

Here @twitter casts the #SanJose riot as if Trump supporters started the whole thing. Why not just TELL THE TRUTH??? pic.twitter.com/ds3yh0FJGv

And for the left, that was precisely the point: creating violence is a no-lose strategy. If protesters can provoke Trump supporters to be violent, they embarrass Trump and cast him as a fascist. And if the protesters themselves are violent, voters will understand that a Trump victory will be met with violent mob resistance.

The left has recruited some Beltway Republicans — the NeverTrump faction — as a willing echo chamber for this meme. Mere hours before the San Jose riot, David French — then considering a third-party run for president to undermine Trump and give the election to Hillary Clinton — accused Trump of inciting violence.

Trump’s primary opponents, too, blamed Trump for the riot that closed down his Chicago rally in April — rather than blaming the organized left-wing groups that created the chaos.

All of that has helped the left establish the predicate for future spin, so that when Donald Trump cites the familiar refrain that gun owners will defend their rights, he is accused of wanting to assassinate Hillary Clinton, and large portions of the media — including conservative media — believe it.

What Wikileaks has uncovered is evidence that the strategy goes straight to the top-most levels of the Democratic National Committee — a plan to defeat Trump by sowing fear of violence by any means necessary, including, perhaps, the use of violence itself.

That is why the Clinton campaign has hitched itself to a violent, extremist movement like Black Lives Matter, even though the primary is over and she ought to be pivoting to the center.

The point is to encourage the chaos — and blame Trump for it.