President Barack Obama’s chief economist says Washington is imposing the economic pain of five simultaneous recessions on less-educated Americans, thereby pushing millions of working-age men off jobs, out of the workforce, and into poverty.

Roughly 10 percent of American “prime age” men, or 7 million men aged 25 to 54, have dropped out of the nation’s workforce of 150 million. They are not trying to get jobs, and are not participating in the nation’s labor force.

“This [dropout] is caused by policies and institutions, not by technology,” admitted Jason Furman, an economist who chairs the president’s Council of Economic Advisors. “We shouldn’t accept it as inevitable,” he told a Brookings Institute expert, Dave Wessel on  August 10. 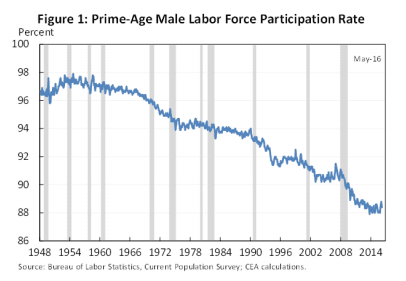 After outlining the huge problem, Furman suggested a few glib and unrealistic fixes,  such as greater education.

But he ignored the ten-ton gorilla in the federal government’s labor policy — the high-immigration policy that annually sends a flood of two million foreign workers into the U.S. labor market just as four million young Americans start looking for their first jobs.

That two-for-four policy has an enormous impact on college graduates, on blue-collar and white-collar wages, on investment locations, and on hiring decisions. Washington and the establishment media largely ignore the impact because cheap-labor immigration gradually shifts wealth and political power from ordinary Americans towards upper-income Americans, especially investors, employers, and political advocates.

In his conversation with Wessel, Furman described the scale of worker dropout and the damage done to the dropout workers:

The fraction of prime age men who are working or looking for work has fallen continuously since the 1950s. In the early 1950s, 98 percent of men in that age bracket had a job … [or] were actively looking for one. Today, that fraction has fallen down to 88 percent. … Understand it is quite large. The difference between a recession and a normal economic period is maybe two percentage points on the employment population ratio … so this is something that is more like 10 percent age points [five recessions] stretched over a long period of time.

In some sense [this drop-off] is bigger than the difference between a recession and a boom, and the impact it has, the evidence is very clear that … when you’re talking about someone who is not married, who has less than a high-school degree, there’s a good chance that [unemployment] is not a choice, and it is associated with depression, with drug use, with suicide, with a range of bad outcomes for people.

Public officials have largely ignored the dramatic discovery that the death rate among white Americans is rising amid the lousy economy and increases in drug-use, most of which is hitting working-class and lower-middle class Americans. 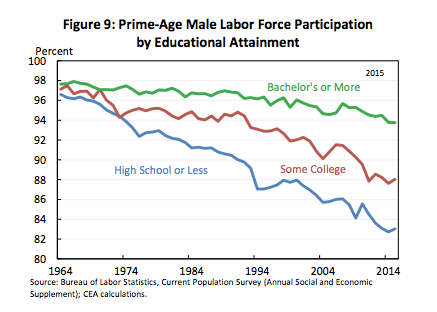 The dropout problem is not caused by technology, Furman said, because other countries have managed the problem better. “We’ve actually had a much bigger decline than all but one [major] economy … [and] Germany has seen an increase in labor force participation,” he said. 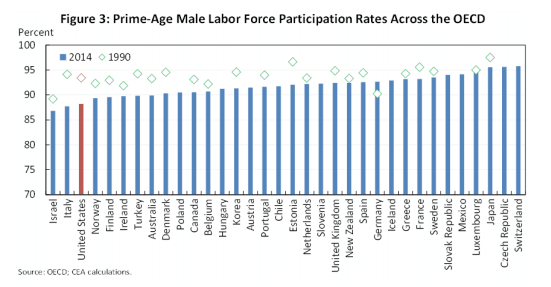 Instead, Furman says low wages are the primary cause of the workforce shrinkage.

“The amount [of money] that employers would want to hire them for some reason has gone down. … That’s consistent with what we see in the states and in the aggregate,” Furman said.

Wessel prodded Furman to explain: “Your hypothesis is that they’re not looking for work because they pretty much know that no-one wants to hire them or if they got a job, it would not be enough money to justify the cost of working or whatever else,” he said. 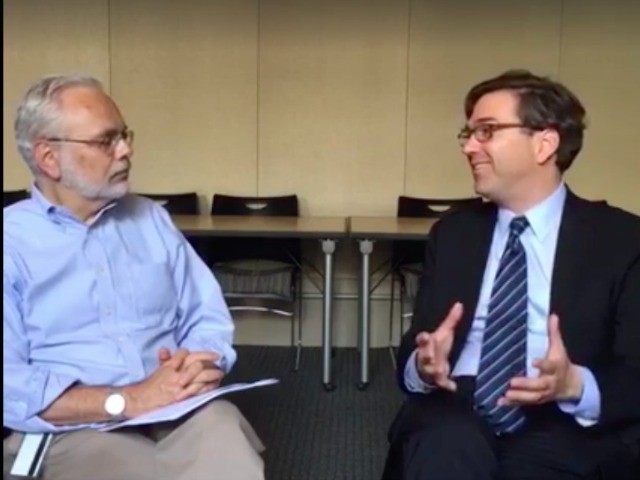 Furman offered a few possible policy fixes for this low-wage/low-participation problem. But all of his proposed fixes would allow progressives in government to play a larger role in training or recruitment, or provide companies with government contracts to hire more workers, or spend taxpayer funds to effectively boost salaries to companies’ workers. The higher compensation could be paid via government-directed minimum-wages or government-run income-supplement programs similar to the Earned Income Tax Program, Furman said.

Furman, a progressive economist who works for Pres. Obama, did not offer any market-based fixes that would bypass government cooperation with business.

In fact, his proposals for government wage-supplements would enlarge the existing business-backed taxpayer-funded subsidies that allow many company owners to profit by hiring Americans at such low wages that millions of Americans have already dropped out of the workforce.

If the government-set minimum wage is raised, Furman insisted, “more people [will] want to work, and they’re more motivated to work.” But these Americans may not be able to successfully relocate and get hired at worksites already filled with immigrant workers and their immigrant foremen.

During their interview, neither Wessel nor Furman hinted at the simplest market-focused solution: stopping the government-run annual inflow of two million foreign workers which lowers the wages paid to each annual group of four million young Americans.

If the two-for-four labor policy was ended, employers would soon run out of Americans to hire, and would then start offering higher wages — and training — to recruit some of the 7 million American prime-age men who have given up working. That’s how salaries for blue-collar Americans rose briefly in the boom years of 1998 and 1999, and why the auto companies recruited so many southern African Americans during the 1940s, 1950s, and 1960s. That wage-boosting process is also why agriculture companies are now pleading with Washington for more immigrant workers.

If there’s an actual shortage of American workers, employers might even more workplaces out of urban centers — heavily populated by immigrants — and then establish facilities and jobs in the exurban and rural areas where unemployment is higher. That’s partly why employers moved meat-processing plants out of Chicago and the Northeast in the 1980s.

But Obama, most Democrats, and many Republicans — especially House Speaker Paul Ryan — do not want to slow the huge annual inflow of immigrants, says Mark Krikorian, the director at the Center for Immigration Studies, which favors a reduction in the annual inflow of legal immigrants. “It is OK with them if less skilled American workers suffer [providing] a lot of workers abroad benefit — [because] they don’t really see themselves as having a special loyalty to their own country,” Krikorian said.

In contrast, Donald Trump is pushing for a low-immigration/high-wage labor policy in the 2016 election. His policy would quickly reduce unemployment and drive up wages, according to a critical Wall Street study produced by a supporter of Democratic candidate Hillary Clinton.

Given the economic evidence, “it seems hard to avoid the conclusion that flooding the low-skill labor market is bad for American workers, and we’ve seen the result in the dropping labor-force participation rate,” he said:

Obviously, it is not all due to immigration — trade, mechanization [play a role] — but the one thing that we have control over is the supply of new workers being imported through immigration, and when the percentage of prime-age men who are working is down, there’s simply no excuse for importing more people to compete with them.

Immigration cuts aren’t going to fix the problem on their own, but they have to be part of a solution, and the reason  — even if you don’t care about the other aspects of immigration — is the fact that it is one thing that the government can control relatively easily. We can’t effect the process of automation, and robot trucks are going to be putting thousands of truck drivers out of work over the next decade or two … [reducing] immigration is a tool that is relatively easy to use, and the fact that we are going the other way — importing more people and Hillary Clinton and Obama would like to dramatically increase the high rate — is outrageous.

Furman did not respond to questions from Breitbart News.

At other events, when talking to his fellow economists, Furman has said that a shortage of workers would raise salaries. However, when pressed by this reporter in 2014 on this issue of immigration supply, employer demand, and Americans’ wages, Furman waffled and dissembled.

That professional zig-zagging is understandable because Furman’s boss — Obama — is ideologically and politically committed to large scale immigration, which he believes will reduce marketplace salaries among Americans, including among African Americans.

Wessel is a former reporter for The Wall Street Journal, and is familiar with the theory of supply and demand. Asked by Breitbart  News why he did not prod Furman to explain the impact on wages of the government-inflated labor supply, Wessel wavered:

If we’re talking prime-age men, it’s a group of people who include immigrants and natives. We have a certain pool of that, [and] it is not clear to me that we can explain a decline [in the number] of workers …. by saying that there we’ve had increase in the supply.

When Breitbart News pointed out that a larger supply of immigrant labor predictably reduces wages and incentives to work, Wessel responded, “That might be the case … to some extent.”