Georgetown University is scrambling to do public penance for having sold 272 black slaves—men, women and children—in order to save the financially-strapped institution in 1838, while simultaneously preparing its next appeal for forgiveness by showcasing pro-abortion activists on campus.

On Tuesday, Georgetown president John J. DeGioia wrote a letter to all members of the Georgetown University Community, inviting them to an open conversation “on the historical role that Georgetown played in the institution of slavery and the persistence of racial injustice in our nation,” to be held on campus Thursday.

The event continues an uneasy conversation sparked by revelations that the Jesuit priests who ran the nation’s top Catholic university sold hundreds of slaves to be shipped to plantations in the Deep South in order to keep the fledgling university alive.

Jesuit Father Thomas Mulledy, who served as Georgetown’s President from 1829-38 and 1845-48, personally “authorized the sale of 272 enslaved people owned by the Society of Jesus in Maryland,” DeGioia’s letter acknowledges.

Last fall, Georgetown expunged the name of Fr. Thomas Mulledy from a building that was named after him, as well as the name of another Georgetown President of the same period, Fr. William McSherry, S.J., from a second building. 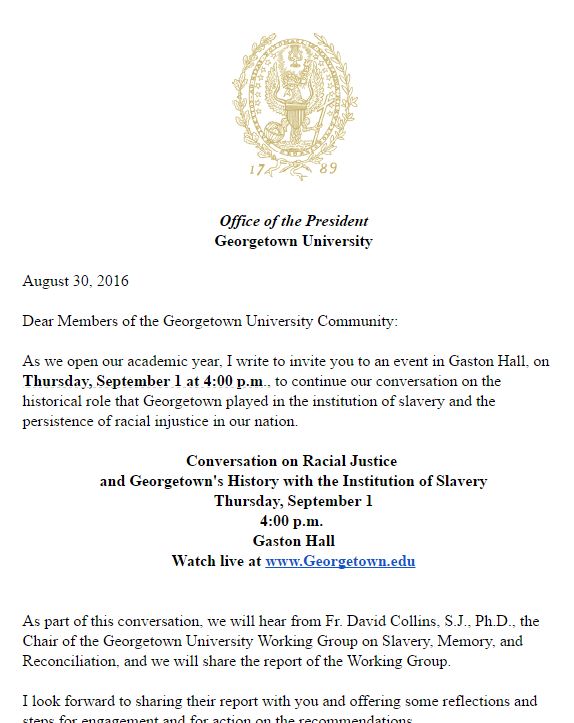 At Thursday’s gathering, Fr. David Collins, S.J., who chairs the Georgetown University Working Group on Slavery, Memory, and Reconciliation, will share a report of the Working Group with all present.

DeGioia said that the Working Group was created to determine “how best to acknowledge and recognize this history; examine and interpret the history of certain sites on our campus, including Mulledy Hall; and convene events and opportunities for dialogue.”

Earlier this year, Georgetown sought to make amends to the black community by creating a department of African American Studies, developing a new center focused on racial justice, and hiring new faculty.

Ironically, however, as Georgetown struggles to purge the memory of its complicity with black slavery in America, it is simultaneously preparing the need to do so all over again regarding an issue that has been repeatedly compared to slavery: the abortion industry.

Last fall, presidential hopeful Dr. Ben Carson drew a parallel between modern abortion and the U.S. slave trade, noting that abolitionists had no right to be personally opposed to slavery, while supporting it publicly. Others have highlighted a number of similarities between the woeful 1857 U.S. Supreme Court decision in Dred Scott with the equally wrongheaded jurisprudence involved in Roe v. Wade.

As far back as 1977, the Rev. Jesse Jackson made a similar argument, noting that if one accepts the position that life is private, and therefore you have the right to do with it as you please, the same logic had to be applied to slavery. “You could not protest the existence or treatment of slaves on the plantation because that was private and therefore outside your right to be concerned,” he said.

Pastor Clenard Childress, Jr., who runs Black Genocide.org, has said that in the United States today “The most dangerous place for an African-American is in the womb,” while also underscoring the similarities between arguments for abortion and those used to justify slavery.

This past spring, Georgetown University invited Planned Parenthood president Cecile Richards to speak to its student body on “reproductive rights” and Richards was greeted with a standing ovation by the 400 students and teachers in attendance.

Georgetown Right to Life, along with The American Society for the Defense of Tradition, Family and Property and others, organized a demonstration on campus to protest the University’s decision to invite Richards.

At the time, protesters noted that Ms. Richards has “overseen the wholesale death of over 2.8 million babies since becoming Planned Parenthood’s president in 2006” and that her presence on campus “dishonors the memory of all the Jesuit saints and martyrs who gave up their lives for God and the Church.” A disproportionate number of those aborted children were African Americans.

It doesn’t stretch the imagination to compare this event with inviting a noted slave trader in the mid-1850s to speak on campus about the benefits of that institution to commerce, social progress and the academy.