Project Fear as a term is perhaps self-explanatory. It is a tactic the establishment has trialled in the United Kingdom since 2014, not dissimilar to the U.S.-style scaremongering campaign ads, but on an industrial, and global level. It pulls in globalist resources like the IMF, the World Bank, the European Central Bank, NGOs, foreign governments and their heads of state. It is a last gasp, death throes tactic employed by a wounded animal.

I told Nigel Farage, just before he shared a stage in Jackson, Mississippi with Donald Trump, that ‘Project Fear’ was going to become and increasingly important phrase in the U.S. presidential race, if it can be used correctly. 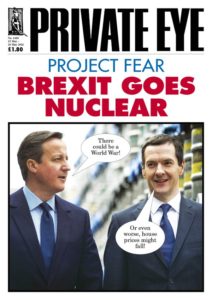 We’ve already seen it rolled out with the threats of Donald Trump being an ISIS recruiting serjeant, with the threat of him accidentally nuking Europe, and now with Mark Cuban’s assertion that U.S. markets would crash if Mr. Trump gets elected.

Mr. Farage mentioned it, not in detail, but he mentioned it, at the rally. He said: “We saw ‘experts’ from all over the world. We saw the International Monetary Fund, we saw Moody’s, we saw Standard and Poors, we saw global leaders giving us Project Fear… They told us our economy would fall off a cliff. They told us there’d be mass unemployment. They told us investment would leave our country. And David Cameron, then our Prime Minister, but no longer, told us we might even get World War Three. And we saw the commentariat, and we saw the polling industry, doing everything they could to demoralise our campaign”.

It is something that is used on a micro (LGBT, Black, Asian communities etc), as well as a macro scale, but it is easy to combat: sunlight is the great disinfectant. People must be made aware of it, and the phrase must now enter the American political lexicon.

Be under no illusion, Britain’s markets were not “crashing” after Brexit as the narrative so often goes, and our currency was already being manipulated, alongside the betting markets, and the stock market, by super-wealthy “Remain” advocates trying to use our economy as a political campaigning tool. Even though they spent millions on this tactic, they still lost.

Project Fear first entered the British political lexicon during the Scottish Independence Referendum in 2014. By sheer coincidence, this was another election where nationalists, albeit socialist ones, faced down the establishment. They lost of course, and curiously enough, to a campaign group entitled “Better Together“. Combine that, by the way, with the “Stronger In” name of the EU referendum’s Remain campaign and you land right on Hillary Clinton’s “Stronger Together” slogan.

The phrase itself is believed to have emanated from within the establishment, Better Together camp. Allegedly, they referred to themselves as “Project Fear”, and relied on a campaign of scaremongering to keep Scotland in the United Kingdom. And it worked.

But by the time the same fear-based campaigning had dominated the 2015 General Election, the British public was beginning to wise up. This is primarily why Project Fear failed at the 2016 EU referendum. The public was now aware of it, and the Leave campaigns could easily dismiss warnings by “experts” over Britain’s security – economically or otherwise – as part of this tactic.

As this trend progressed, the Remain side failed to realise their tactic simply wouldn’t work at all, instead opting to double-down on it. This comes back to what Nigel Farage said in Jackson.

We even saw the Prime Minister ridiculed, humiliated, and having to back down in a public, televised Q&A from his claim that war might break out if Britain left the European Union. The establishment had been exposed as shark-jumpers extraordinaire. Their already faltering reputations were now irrevocably tarnished.

By the time they tried to recalibrate under the “Project Fact” banner, it was too late. And this itself only served to remind people of Project Fear.

This, by the way, is also the real reason former Prime Minister David Cameron had to resign. He knew we wouldn’t be able to command the trust of his party, his Members of Parliament and therefore the government, nor the public following such a brazenly disingenuous campaign.

This was in stark contrast to 65 per cent of the campaign run by the Leave sides. While the establishment Vote Leave group were busy making up numbers and plastering them on buses, the anti-establishment side led by Mr. Farage and the Leave.EU group were offering hope. One of their leading slogans was “Believe in Britain”. I tweeted this the day before the vote:

And now Project Fear has found its way to America. Like many an idea that sprang from some jock, Project Fear follows in the footsteps of the telephone, the television, antibiotics, the refrigerator, the toaster, and the vacuum flask.

Project Fear is the art of talking a country, its people, and its would-be saviours down, all the while pretending you are the upbeat, positive, “progressive” campaign.

Margaret Thatcher once slammed down a copy of the Constitution of Liberty onto a table of her advisors and declared: “This is what we believe!”. You can picture almost the same thing happening with Hillary Clinton and the Project Fear 101 handbook. The question remains as to how quickly, or if at all, Americans will grasp this is happening to them.