“Hillary Clinton for President of the United States” booms Foreign Policy magazine, bragging that its own “half century history… the editors of this publication have never endorsed a candidate for political office”.

But it has, with this headline, perhaps betrayed the fact that U.S. foreign policy has been mainly steered by one, internationalist, globalist cabal by taking the self-declared extraordinary step of slamming Donald Trump.

Foremostly, the editor in chief of Foreign Policy magazine, David Rothkopf, is a Democrat who helped President Bill Clinton sign the North American Free Trade Agreement (NAFTA) while serving as U.S. Deputy Under Secretary of Commerce for International Trade.

And how could we possibly believe this is anything remotely exceptional when the history and present of Foreign Policy (FP) magazine is so tied up with the globalist establishment?

It was founded by Samuel P. Huntingdon, of “Clash of Civilizations” fame and a life-long Democrat and foreign policy hawk.

Huntington noted in 2004 that the global elites “have little need for national loyalty, view national boundaries as obstacles that thankfully are vanishing, and see national governments as residues from the past whose only useful function is to facilitate the elite’s global operations”.

FP was bought by the Carnegie Endowment for Peace, a globalist think tank founded by internationalist Andrew Carnegie. To give further context to this, the current President is William J. Burns – the former United States Deputy Secretary of State (2011-14). In other words, he worked for Hillary Clinton.

Carnegie sold FP to the Washington Post group in 2008.

When the Washington Post – which has been an integral media ally of the Hillary Clinton campaign – bought FP, it was losing around $1.3m a year. But it was considered so integral to helping push a neoconservative, hawkish foreign policy, that it was worth the loss.

The chairman of the Washington Post group in 2008 was Donald E. Graham, who said of the acquisition: “Foreign Policy is a terrific magazine, and I’m pleased it will become a part of our company… Foreign Policy furthers our commitment to great magazine journalism and gives us another opportunity to expand our journalism online”.

In 2008, Foreign Policy was moved into the Slate group, the home of the left-wing Slate magazine. 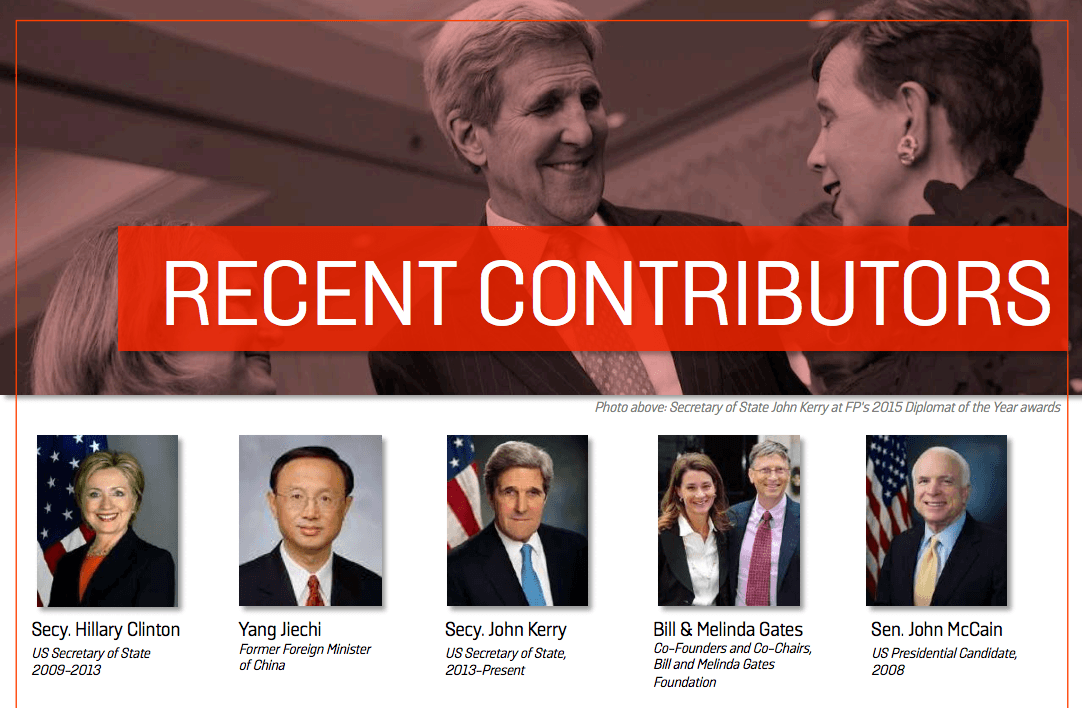 When Amazon owner Jeff Bezos bought the Washington Post, he did not buy the loss-making Foreign Policy magazine with its declining readership. Alexa.com, which is a site ranking organisation run by Amazon itself, reveals Foreign Policy to be the 9719th website in the world compared to its competitor the Economist, which is the 1,935th website.

Instead, the magazine stayed with the aforementioned Donald Graham, who changed the name of the Washington Post group to Graham Holdings Company to reflect the sale of the paper.

The magazine now operates under the FP Group, headed up by David Rothkopf.

Rothkopf, to square FP’s historical circle, is a scholar of the Carnegie Endowment for Peace. He was a managing director at Kissinger Associates, former U.S. Secretary of State Henry Kissinger’s New York-based consulting firm which was founded alongside Mack McLarty, President Bill Clinton’s chief of staff.

But greater still, Rothkopf himself served as U.S. Deputy Under Secretary of Commerce for International Trade under the Clinton Administration in 1993, when Mr. Clinton was signing NAFTA which Donald Trump has pledged to reform.

Graham, the Chairman and CEO of the company that owns Foreign Policy magazine, is married to Amanda Bennett, a Bloomberg journalist who has just moved to Voice of America.

In 2014, the pair founded a “multimillion dollar National Scholarship Fund” for the children of illegal immigrants in the United States.

The organisation has solicited large donations from many Hillary Clinton supporters such as the Bill & Melinda Gates Foundation, the Fernandez Foundation, Bloomberg Philanthropies, and a whopping $5m from Facebook mogul Mark Zuckerberg.

Foreign Policy magazine’s claim to be “breaking with tradition” in endorsing Hillary Clinton is anything but accurate.

Perhaps it has never written an editorial, but its entire editorial line and history is, in and of itself, a tradition of endorsing globalist, neoconservative, pro open borders policies and candidates.

The idea that this is somehow a big deal is a total farce.