In an exclusive interview with Breitbart News, American tech worker Mike Emmons detailed the untold story of his personal experience with the office of then-Senator Hillary Clinton and revealed how she abandoned American workers in favor of fulfilling the desires of corporate donors and foreign special interests.

Emmons, who was one of the nation’s first whistleblowers to expose the displacement of American workers by foreign nationals brought in on guest worker visas, is one of thousands of American workers to have lost his job as a result of the cheap labor practices of the India-based outsourcing firm, Tata Consultancy Services (TCS)–a Clinton Foundation donor whose anti-American worker business model has been “enabled” and endorsed by Hillary Clinton.

Emmons said that his interactions with Clinton in 2003 opened his eyes to the cynical and corrupt pay-for-play tactics of a career politician, guided and consumed by her desire for self-advancement and personal enrichment.

As Emmons watched Clinton’s office rebuff his “desperate” pleas for help–choosing, instead, to stand with a foreign corporation at the direct expense of the American workers she was elected to represent–that was the moment, “my naïveté was over,” Emmons said. “That was when I realized exactly what this was: I realized it’s the government against the people.”

“Hillary Clinton does not care about American working families. I don’t believe she cares for any American,” Emmons added. “Even with all the issues regarding Trump’s personal life, his stance on American workers is a thousand-fold better than Clinton’s. … Without a doubt, Donald Trump is the first presidential candidate that made me feel heard–that paid attention to working people.”

“Working Americans are the ones that should really care [about this election],” Emmons said. “If you’re a working American, Trump is the only person who is going to work for us.”

The story of citizens like Mike Emmons and his colleagues has become an all-too-familiar one: American tech workers are gathered together for a meeting with their executives—in this case, by Siemens in Lake Mary, Florida, in 2002. The unsuspecting workers are then informed that, despite their stellar performance record and years of service to the company, they’re all being fired and replaced by predominantly foreign-born Indian workers. However, before they are to be officially let go, they’ll be forced to train their foreign replacements. If they refuse, the American workers will not receive their severance. Companies like Siemens, Disney, Southern California Edison, Xerox, Northeast Utilities, and countless others are able to do this through forming contracts with India-based outsourcing firms like Tata that import thousands of foreign workers into the country on L-1 and H-1B visas and use them to supplant American workers who had been working there previously.

By all accounts from the workers who have dared to risk their future in the tech industry by speaking out, the experience of training their foreign replacement is nothing short of traumatic.

One American worker, who wrote an op-ed for Breitbart News on the condition of anonymity, said he felt “betrayed.” He spoke of the alienation he felt as he endured the “humiliat[ing]” and “disgraceful” experience of having no choice but “to watch a foreign worker completely take over my job.”

“Workers tell me that they feel physically sick as they’re forced to train their replacements,” said attorney Sara Blackwell, who runs an organization that represents high-skilled American workers replaced by low-wage foreign workers. “They go home and vomit; they cry every single night; they go into counseling; they’re admitted to hospitals; there are divorces; we’ve seen two suicides as a result of these cheap labor practices.”

This business model, Blackwell said, “has single-handedly destroyed American families by the thousands.”

Emmons had a front row seat to the devastation.

Although Emmons, as a contractor, was not formally displaced and was eventually able to land on his feet, he watched as some of his friends–unable to find new employment–were forced into early retirement. Others, far too young to retire, were forced to abandon their trade and leave the tech industry altogether–even though that meant letting years of specialized schooling and experience in the high-skilled sector go to waste. For many of those workers, their last opportunity to use the specialized skills they had spent decades cultivating was when they had to “transfer” that career’s worth of knowledge to their lesser-skilled foreign replacements, who would work for a fraction of the cost.

Emmons recalled one coworker, who after twenty years in the IT industry, was forced to go into landscaping to make ends meet.

“The more I learned, the more upset I got,” Emmons said. “As a contractor, Siemens never trained me. They didn’t pay me to train myself. I learned it all myself. And it upset me that I’m having to give away my hard-earned knowledge–an education and training, which I had paid for out of my own pocket so I could then train my replacements who were much less qualified.”

Emmons’ job was to be filled by–not one, but–three foreign workers, each of whom made a fraction of Emmons’ salary and each of whom he had to train to “learn a different facet of [his] job.” While Emmons made roughly $90,000 a year, he said the foreign workers’ contract salary ultimately came out to roughly $1,000 a month.

“It was the most demoralizing time of my life,” Emmons said, who was concerned about how losing his job would affect his ability to care for his young daughter, who had been born with a serious medical disability. “All I could think about is: how am I going to keep her insurance? It was about $930 a month at the time, which was almost the equivalent of [the foreign workers’] salary.”

Emmons knew he couldn’t sit by and watch. Instead, he launched what has been described as “a ferocious one-man campaign against the practice of offshore outsourcing and supplanting American workers with foreigners on temporary work visas.”

While still at Siemens, Emmons copied Tata’s 800 documents on the Siemens shared drive and set up an encrypted tunnel between Siemens’ server and his home server, so that he could communicate important information to the news media and expose what Tata was doing to American workers. Emmons’ tireless efforts to bring attention to what was happening resulted in a local Orlando WKMG CBS exposé and Emmy-nominated series, titled, Where Did the Jobs Go?

Around that time, Emmons also reached out to the office of then-Senator Clinton seeking representation.

“I sent her office reports, CDs, data. We had spoken over telephone and in written correspondence. We had emails going back and forth. I told her specifically about what Tata had done and how we had to train our replacements,” Emmons said.

“We Americans, just the normal Americans that work for a living need the help of Senator Clinton,” Emmons wrote in a 2003 letter to Clinton congressional staffer, Erin Ashwell, an exclusive copy of which Breitbart News has obtained. “She needs to realize what this company and many [Tata]-like companies from India are doing. They are just taking jobs from Americans. … We desperately need help,” Emmons wrote. 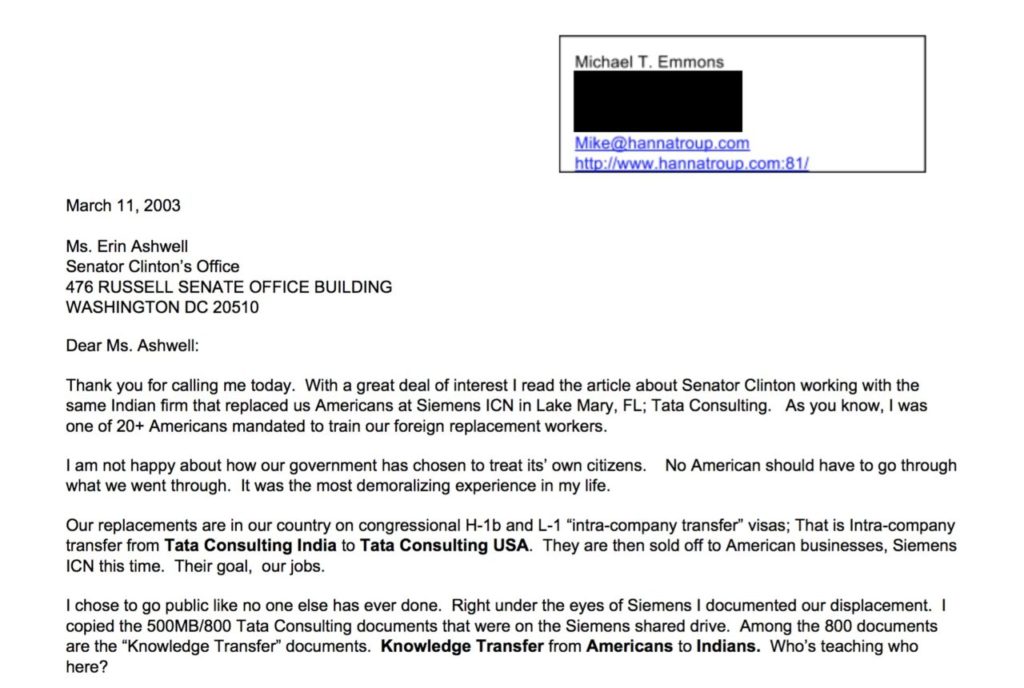 Emmons told Clinton’s office of his fears about how he would be unable to provide for his seven-year-old handicapped daughter, whose disability required expensive medical care. “What are we supposed to do?” Emmons wrote in his letter to Clinton’s staffer. “As a parent of a handicapped child, Hanna, born with spina ­bifida L4-5, all I wanted to do was pay my $930/month medical insurance premiums. Hanna is 7 years old and has had 8 surgeries.”

Emmons said Clinton not only ignored his repeated pleas, but she joined forces with Tata to help open a data systems office in Upstate New York.

“About a month after I spoke to her office, Hillary went to Buffalo to get her pockets lined by Tata at their grand opening,” Emmons explained.

Indeed, as the Los Angeles Times reported at the time, Clinton’s deal with Tata “signaled that Clinton, who portrays herself as a fighter for American workers, had aligned herself with Indian American business leaders and Indian companies feared by the labor movement.” 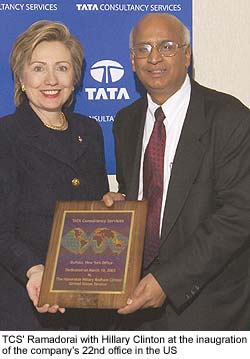 Making matters worse in Emmons’ view, a press release issued by Tata announcing the opening revealed that the deal was, in fact, “the brainchild of Senator Hillary Rodham Clinton.”

Howard University Professor Ron Hira observed that during the ten-year period FY2005-2014, Tata imported an incredible 27,193 H-1B guest workers and likely more than 10,000 L-1 workers. That is tens of thousands of “jobs that American workers should have been hired for or in many cases were already doing … and got replaced” by lower-wage foreign labor, Hira told Breitbart News.

Interestingly, Tata has given tens of thousands of dollars to the Clinton Foundation. The Clintons also have financial ties to the India-based consulting firm responsible for the replacement of scores of American workers at Disney in Orlando, Florida.

Yet Clinton’s questionable financial and political ties to powerful Indian outsourcing corporations have received little media attention this election cycle. Emmons said he firmly believes that is because “the mainstream media is totally in bed to get Clinton into office. The media are afraid of what Trump might do because he’s not one of them,” Emmons explained.

Indeed, in 2007, Clinton’s extensive ties to Indian donors, who support the outsourcing of American jobs and the insourcing of foreign labor to replace American workers, were thrust into national media spotlight following a hard-hitting memo issued by then-Senator Barack Obama’s campaign.

“It’s all about the money,” the Obama campaign wrote about Clinton’s ties to India.

In the memo, the Obama campaign labeled his opponent, “Hillary Clinton (D-Punjab)”–implying that Clinton represents foreign nations and foreign citizens, rather than her own American constituents. The dig was a reference to a joke Clinton had previously made in which she told a group of Indian Americans that she saw herself as the elected representative of foreign citizens in the Indian region of Punjab. “I am delighted to be the Senator from Punjab as well as from New York,” Clinton said.

“Hillary doesn’t care about America,” Emmons told Breitbart. “She doesn’t even really want us to be America. … She wants a one-world government. That’s all I can say. I can’t comprehend why she takes all this money from foreign governments, or why she’d joke that she’s ‘the Senator of Punjab.’”

The Clintons have repeatedly articulated their support for globalist policies, including “open borders”–which Bernie Sanders has described as a radical position supported by wealthy donors that “says essentially there is no United States” by “doing away with the concept of a nation state.” Sanders warned that open borders would allow wealthy corporations to “bring in all kinds of people [who] work for $2 or $3 an hour” and “would make everybody in America poorer.”

A recent WikiLeaks release revealed that in a private speech to foreign bankers, Hillary Clinton said, “My dream is a hemispheric common market, with open trade and open borders.”

As the Los Angeles Times observed in 2007, the Clintons’ praise for “open borders” frequently comes when they are speaking before foreign audiences and wealthy donors. The Los Angeles Times noted that, in particular, the Clintons have often sought to “telegraph” their support for open borders and a globalized world to “wo[o] wealthy Indian American” donors who have “close ties to their native country and an interest in protecting outsourcing laws and expanding access to worker visas.”

Emmons explained that in contrast to Clinton’s allegiances to foreign nations and donors, Donald Trump will represent the interests of America and her citizens. “This election is all about jobs, the economy, eradicating ISIS, the borders, and most importantly, loving America. … Donald Trump will be on our team–the American team,” Emmons said. “When he becomes president, he’s going to do what’s best for Americans.”