Just as they did with the claim that Hillary Clinton supports open borders, PolitiFact ignored reality to try to discredit Donald Trump’s criticism of the Democratic nominee.

PolitiFact admitted that Trump was correct when he claimed Russia had 1,800 nuclear warheads and that the United States has not expanded its arsenal while Russia has, author Lauren Carroll rated the statement as “half true” for supposedly “missing the big picture.”

However, Trump overstates the significance of this growth in Russian deployed nuclear warheads, and his claim omits the fact that Russia and the United States are estimated to have about the same number of nuclear warheads when non-deployed stockpiles are included. [emphasis added]

Rather than being “a fact-checking website that rates the accuracy of claims,” it appears Politifact has broadened its mission statement to “rate the accuracy and significance of claims.”

But even that objection does not stand up to scrutiny. As long as Carroll is parsing the wording this closely, note that Trump did not say the “growth” in warheads was “significant.” He said that the number of warheads in their overall stockpile is “tremendous.”

Carroll even included a chart contradicting her claim that Trump’s statement is half-true, showing the increase in Russian deployed nuclear arms and decrease in American nuclear arsenal during the Obama presidency: 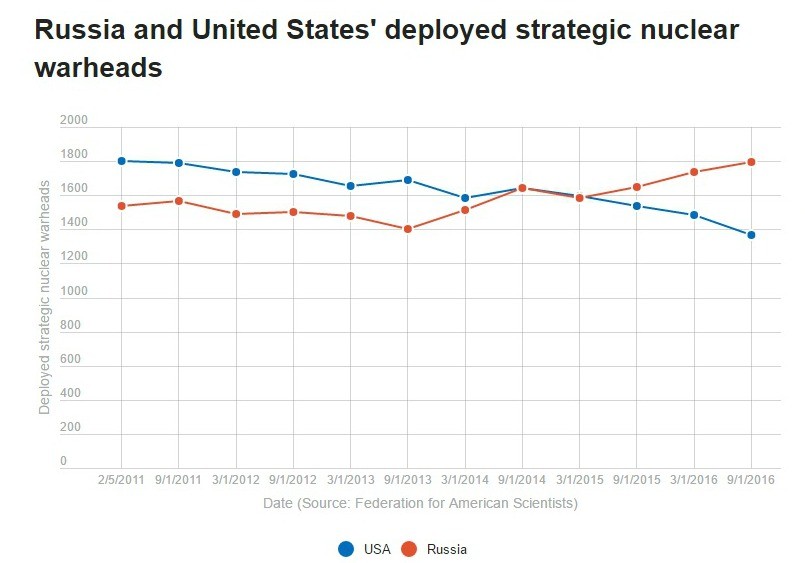 PolitiFact’s Carroll attempts to minimize the importance of this increase by claiming it is the result of Russia modernizing its nuclear arsenal, “replacing old missile launchers and submarines with new ones that can hold more warheads per vehicle. But they haven’t yet retired all the old vehicles, so the deployed warhead count temporarily reflects the doubling up of new and old launchers currently deployed.”

Thus, the other half of her argument appears to be that someday soon — we don’t know when! — Russia will correct this redundancy, so we must ignore today’s concrete numbers and evaluate the claim based on tomorrow’s unknown numbers.