Republicans are hoping a midwestern blue-collar wave can carry Donald Trump to the White House, and there’s growing statistical and anecdotal evidence that their hopes are justified. 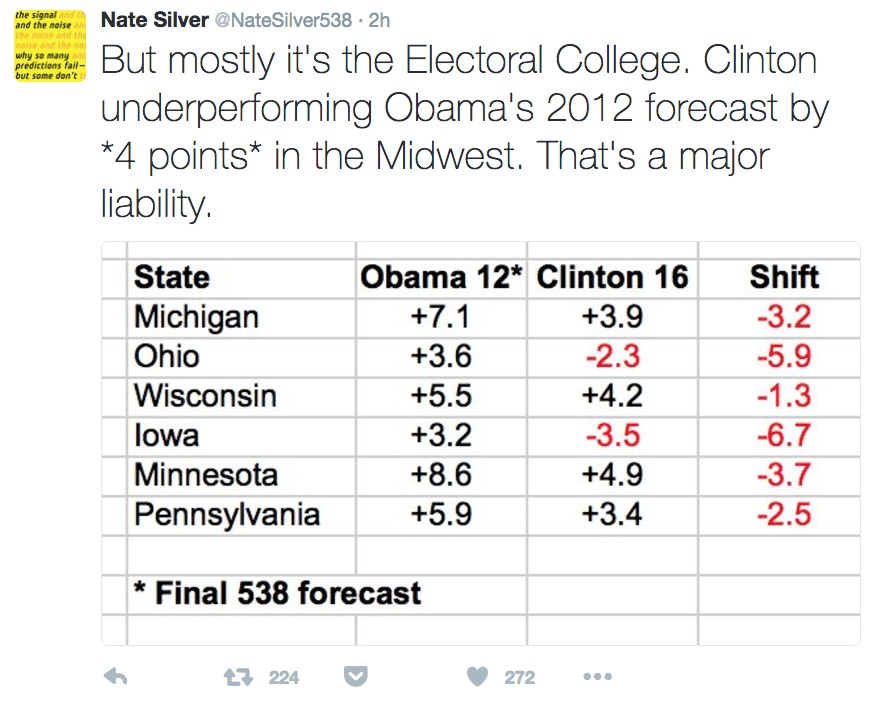 Silver’s analysis shows Trump has gained 6 points over Romney in Ohio and Iowa, and has closed the gap with Hillary Clinton down to almost error-margin levels in crucial Michigan and Pennsylvania.

That midwestern success is what gives Trump a one-third chance of winning the election, said Silver. “Clinton underperforming Obama’s 2012 forecast by *4 points* in the Midwest. That’s a major liability,” he tweeted.

On Sunday night, according to RealClearPolitics’s average of polls, Clinton was ahead of Trump in Pennsylvania by just 2.4 points (46 percent to 43.6 percent), and ahead in Michigan by 4.7 points (44.7 percent to 40 percent). A win in either state could be enough for Trump to win the election.

GOP leaders in Michigan and Pennsylvania have plenty of reasons for optimism, even as Trump is still lagging in the polls.

These blue-collar voters can be difficult to get to the polls, he warned. “It is difficult to turn them out [on election day]. But the fact that they are willing to stand in line for hours [at Trump rallies] tells you something,” he said. “I would not be surprised if Trump won 40 states or lost 40 states — if the wave of blue collars comes out, I can see him sweeping the states.”

In a bus trip across the northern part of the state, GOP spokeswoman Sarah Anderson kept track of the lawn signs and posters. “It was all Donald Trump … I would say it was 99 to 1 [and] I think I saw six Hillary signs in our trek,” she told Breitbart News. Compared to the Democrats, “there is a huge enthusiasm gap … everything is trending Trump across the country,” she added.

Top Democrats are flying into Michigan and Pennsylvania — not into Florida or North Carolina or Nevada — to keep the state blue throughout election day. On Sunday, Hillary Clinton was a church service in Philadelphia, declaring the race was about President Barack Obama. “This election is about doing everything we can to stop the movement to destroy President Obama’s legacy,” she said.

On Monday, Clinton will be in Grand Rapids and Obama will fly to the University of Michigan in Ann Arbor.

Trump is going to Scranton, Pa., on Monday and then to Grand Rapids in Michigan for a midnight rally.  On Sunday evening, Trump was at a huge rally in Sterling Heights, Michigan. “Ocean of people,” said a tweet from the Daily Mail’s reporter.

That huge audience echoes the GOP primary in Pennsylvania, which doubled in size to 1.6 million in 2016, while voting at the Democratic primaries dropped a quarter, down to 1.7 million. The state doesn’t have any early voting to reveal voters’ true preferences, but the two campaigns’ polls are causing the leaders to converge in the Keystone State.

The shift towards Trump is found in nearly every state from New York to Iowa, expect for Illinois, where Clinton has expanded Obama’s winning margin in the diverse state from 4 points in 2012 to a huge 11.5 percent advantage.

Just north of Pennsylvania, voters in New York’s western districts are shifting away from Clinton.

This is unsettling for Clinton if that kind of underperformance is similar across the border in PA & elsewhere. https://t.co/4C5OBvZWF4

Just west of Wisconsin, voters in Iowa have shifted sharply towards Trump, putting him 12 points ahead of Romney’s 2012 performance against Obama.

In neighboring Minnesota, RealClearPolitics shows Trump is trailing by six points, in a state which Obama won by almost eight points.

West of Ohio lies Indiana, where the RealClearPolling chart says Trump is ahead by 10.7 points, which is similar to Romney’s 10.2 point win over Obama in 2012. 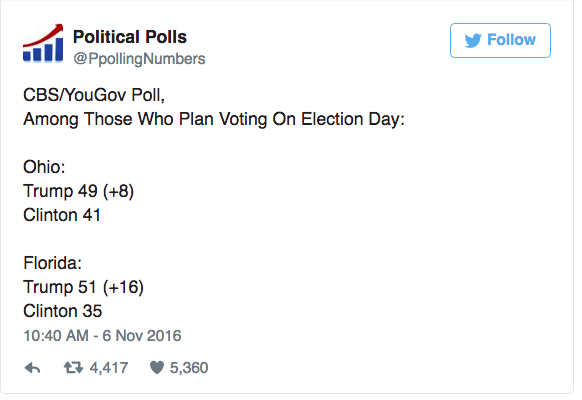 So the blue-collar wave exists — but neither Trump, not Clinton know if it is enough to sweep her out of politic and sweep him all the way down the Potomac and into the Oval Office. “This is a populist realignment that we have not seen a long time,” said Anuzis. “It is a wide open ball game, and big part of it is going to be who turns out” on election day, he said.