After stumping for Hillary Clinton throughout the 2016 election, the British left-wing Guardian newspaper has now openly declared war on Donald Trump, and is soliciting donations in order to “hold the new administration to account.”

In an online ad attached to news articles, the Guardian alleges that Trump will be an enemy of freedom of the press and proclaims itself the sentinel that will hold him accountable.

“President-elect Donald Trump has threatened to weaken first amendment protections for reporters. He has said he will sue news organisations. He has labelled the press ‘dishonest’ and ‘scum’,” the paper states.

What evidently tied the paper’s briefs in a bundle was Trump’s calling out media dishonesty and their shameless pandering to the Left. His outspoken criticisms of the mainstream media earned him their eternal ire, while emboldening Americans tired of being preached at by their newspapers.

As a Nov. 7 article in Business Insider noted, this presidential election “may have the most lopsided batch of newspaper endorsements the US has ever seen,” with newspapers and journals overwhelmingly snubbing the Republican candidate in favor of Secretary Clinton. Because of their open commitment to the Clinton campaign, it only stood to reason that their reporting on Trump would be similarly skewed. 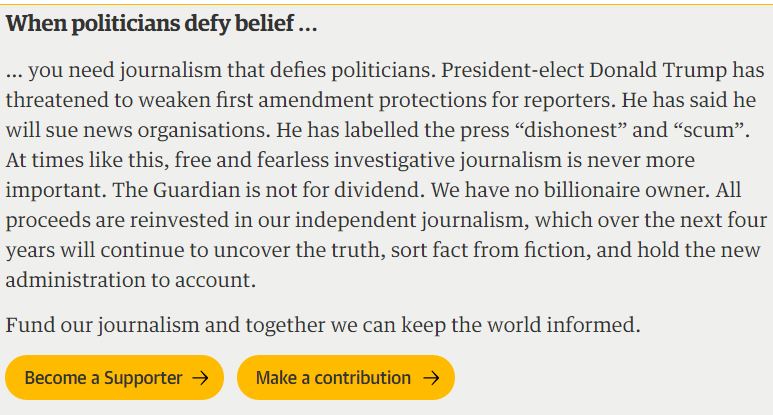 As many observers have noted, the biggest losers in the election was the establishment media, whose credibility has sunk to an all-time low.

Undaunted, the Guardian declares: “At times like this, free and fearless investigative journalism is never more important,” as if their man-bites-dog story will manage to convince anyone.

In its attempt to whip up fears of Trump for its own sordid gains, the Guardian begs for donations to make up for its flagging readership.

“Our independent journalism,” the paper claims, “over the next four years will continue to uncover the truth, sort fact from fiction, and hold the new administration to account.” Attentive readers will no doubt wonder how the paper can “continue” something it has yet to start.

If there is one lesson the election taught Americans, it is that the establishment media has been the primary enemy of free speech and honest debate. In their efforts to smear Donald Trump and his supporters, they resorted to the lowest forms of deceit, trickery, mean-spirited slurs, and outright lies.

In the face of this, the Guardian’s pitiful fundraising appeal sounds eerily like a death wheeze.