Palin took to her Facebook page Monday night to blast “the liberal lamestream lapdog media” for not getting “anything right in its coverage of the Trump Train.”

“A latest press target is a man who’s been part of a team that just made history,” Palin wrote. “Trump campaign CEO, Steve Bannon, is particularly bright on the Leftist media’s radar because they can not handle the fact he’s also from their arena but has been enormously more influential than his peers. ‘How dare one of our own succeed outside our herd,’ is no doubt a favorite whine in DC today.”

The Steve Bannon I know is a passionate defender of freedom and he lives by example. He’s a patriot; a military veteran and proud Army dad. Bannon’s talents are on display in many venues, my favorite being his production of the documentary “The Undefeated.”

Please, watch the film “The Undefeated.” Bannon understood the media’s coverage of the 2008 election defined “injustice” and “double standard.” More importantly, he did something about it. I’ll be forever grateful, as will other Commonsense Conservatives who will not stand for the press’s politics of personal destruction. A masterful work of wrecking the media’s biased filter, Bannon captured truth. He’ll do the same as we unite around our 45th President, Donald J. Trump.

Palin included a photo of herself embracing Bannon’s daughter, an active duty Army officer, during a book signing at Fort Campbell during Palin’s Good Tidings and Great Joy book tour in 2013. 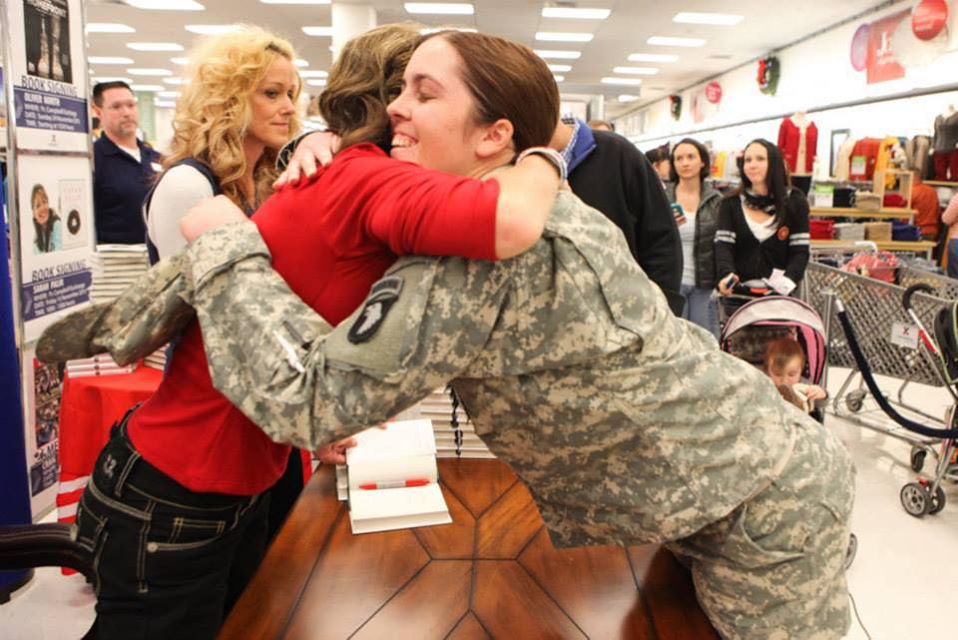 Palin embracing Bannon’s daughter at a book signing at Fort Campbell in 2013.

Bannon wrote, produced, and directed the documentary film “The Undefeated” in 2011 to chronicle the story of Palin’s conservative populist roots. The film charts her rise as a corruption fighting mayor and governor in Alaska, her entrance on the national stage as Senator John McCain’s running mate in 2008, and her leadership in the grassroots Tea Party movement that ushered in historic electoral victories for the GOP. The film opened on a montage of leftwing hate and smears directed at Palin as a result of her energizing the Republican base in 2008.

Earlier in her post, Palin noted, “Obviously we look forward to a fundamental restoration of American exceptionalism under a President beholden to no one but we the people, but in addition, be thankful for the coming monumental change in journalism. Ready to stop rewarding the media’s engagement in politics of personal destruction? Demand and declare it changes now.”