Somalis are the least educated group of refugees who have arrived in the United States during the first three months of FY 2017.

As Breitbart News reported previously, the Obama administration has resettled 25,671 refugees in the country during the three month period beginning October 1, 2016 and ending December 30, 2016. This is almost double the number of refugees resettled in the United States during the same period in the prior fiscal year, FY 2016.

More than 85 percent of these refugees arrived from just eight countries: the Democratic Republic of the Congo, Iraq, Syria, Somalia, Burma, Ukraine, Bhutan, and Iran.

Twenty percent of the refugees who have arrived in the United States during the first three months of FY 2017, or 5,179 out of 25,671, are from the Democratic Republic of Congo, the country with the highest percentage of arrivals. 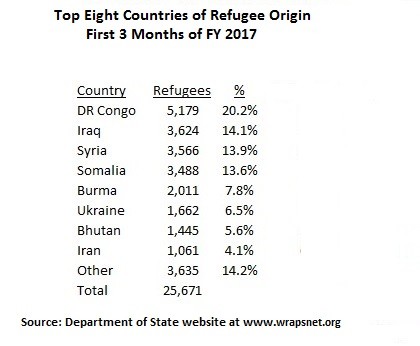 The levels of education of arriving refugees from these eight countries variy widely. More than 71 percent of refugees arriving from the Ukraine have achieved high school level or higher training (secondary, university, professional, or technical degrees). At the other end of the spectrum, less than nine percent of refugees from Somalia arrived with high school level or higher training.

In contrast, 88.4 percent of the United States population age 25 or over had a high school degree or more in 2015, according to the U.S. Census Bureau.

While refugees arriving from the Ukraine and Iran have education levels comparable to those found in the general population of the United States, refugees from six of the remaining top eight countries are significantly below American education levels. 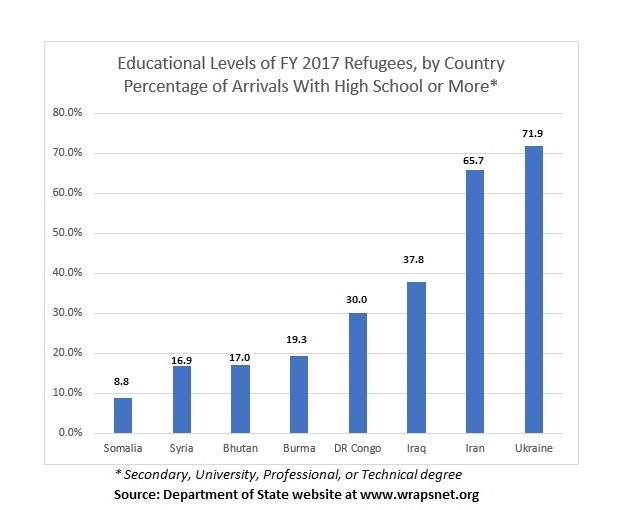 Many of these arriving refugees do not speak English, or speak it so poorly they are unable to communicate with neighbors, at work, or at school.

As a result, school systems across the country are increasingly burdened with providing English Language Learning (ELL) classes to refugee students and, in some cases, adult refugees.

In Omaha, Nebraska, for instance, “The number of English-language learners and refugee students in the Omaha Public Schools continues to surge, with one in three OPS students speaking a language other than English at home,” the Omaha World-Herald reported in 2014.

“Omaha’s growing Hispanic population and the city’s position as a resettlement hub for refugees are two of the driving forces behind the rise of students in the English-language learner program,” the World-Herald noted.

The story is the same in Buffalo, New York, and hundreds of other cities in the country.

“More than 85 different languages are spoken throughout the [Buffalo Public Schools] district,” the Buffalo News reported in November, noting that the city “has taken in thousands of immigrants and refugees in recent years.”

“English language learners [ELL students] now make up 15 percent of the district’s enrollment, and as a whole, they are among the lowest-performing, state figures show. They also are the fastest-growing segment,” the News added.

Somali refugees in Buffalo are among the many consumers of ELL services, paid for by federal and local taxpayers, as the News noted in this reporting of a common scene:

Yakub, a former refugee now raising his own kids in Buffalo schools, spoke in Somali to a father and two little girls dressed in head scarves and matching pink coats. . .

Another staffer escorted the two Somali girls to a different room where he would assess their English by testing their speaking, reading, writing and listening skills.

The test can take anywhere from 45 minutes to three hours and is private, so their father stayed behind in the old gymnasium furnished with a dozen tables and chairs where he continued the process of finding them a school.

He conversed in Somali with Yakub, who stopped occasionally to interpret for a reporter observing.

“The father is from Somalia. He fled his country and made the risky journey to South Africa. That’s where he met his eventual wife and where his daughters were born, but where the family did not have permanent residency,” the News reported, adding that “The family was resettled in Buffalo in September.”

The combination of low education levels and lack of proficiency in English limits the employment opportunities for many refugees to low skill, low wage jobs, such as are found in the meatpacking industry.

Somalis, in particular, are heavily employed in the meat packing industry.

The consequence of the availability of low skill, low wage refugees to fill jobs in the meat packing and related industries has been to keep wages down and limit employment opportunities in those industries for low skilled American citizens living near those meat packing plants. The plants also need a steady supply of new healthy workers to replace the workers whose hands are eventually damaged by the rapid repetitive motions required in the high-speed, low-tech slaughterhouse line.

A number of communities have experienced this problem over the past decade, including Shelbyville, Tennessee; Liberal, Kansas; Fort Morgan, Colorado; Austin, Minnesota; and Grand Island, Nebraska.