The CDC data, which has been public but obscure until now, shows that the number of refugees diagnosed with active TB in recent years is more than three times greater than previously reported by any media outlet. 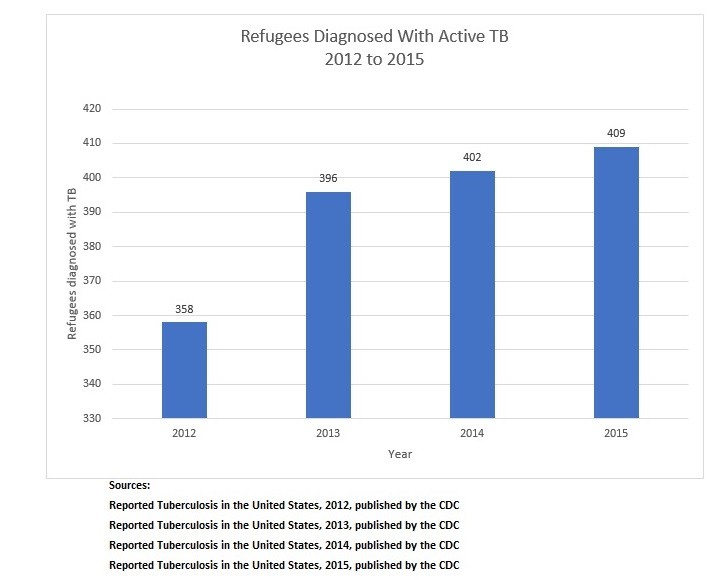 In October, Breitbart News reported that 476 cases of active TB among refugees have been reported in the fifteen states that made that data available. Thirty-five states did not make the data available, even though they had apparently reported it to the CDC:

Until Breitbart News discovered the public, but effectively hidden, CDC reports, the scale of the TB problem among refugees was underreported by more than 1,000 cases over recent years – off by a factor of more than three.

The number of refugees resettled annually in the United States increased from 58,238 in FY 2012 to 69,933 in FY 2015, according to the Office of Refugee Resettlement.

Two other important findings arise from the CDC data:

Georgia, for instance, is the most surprising untold story. During the four years between 2012 and 2015, 96 cases of active TB were diagnosed among refugees in the Peach State. On a per capita basis, Georgia has one of the highest instances of refugee TB of any state in the country. Yet nowhere has this important story been reported.

Texas is known to have one of the highest rates of foreign-born TB in the country. What was not previously reported, however, is the significant role refugees have played in that phenomenon. During the four years between 2012 and 2015, 186 cases of active TB were diagnosed among refugees in the Lone Star State.

Similarly, it has been widely reported that TB is a public health issue in California.

Breitbart News was unable to obtain the full story from the California Department of Public Health about the number of refugees diagnosed with active TB in California until discovering the CDC annual reports. We had only been able to document three cases of active TB among refugees in California based upon publicly available data from the state.

The CDC data, however, makes clear that California has a significant problem with active TB among refugees. During the four years between 2012 and 2015, 251 cases of active TB were diagnosed among refugees, which is 248 more than the three cases previously reported.

Breitbart News will provide a number of additional reports based on the data contained in these annual CDC reports in the coming weeks.