Promising “an inside account of election night at Clinton headquarters, where the sounds of ‘heated shouting’ and ‘smashing of glass’ emanated from the Clinton’s private rooms as their empire fell down around them,” a new book, Game of Thorns by New York Times bestselling author and presidential historian Doug Wead, is due out from Hachette Book Group on February 28.

It could prove to be the exclamation point on now President Donald Trump’s groundbreaking victory in November.

Billed as “the first complete, detailed, historical account of the election,” Game of Thorns features interviews with a number of sources including Trump himself. Wead conducted his research over the course of the campaign with a historian’s eye, and the result is a stunning, definitive account of a story that Americans only think they know. 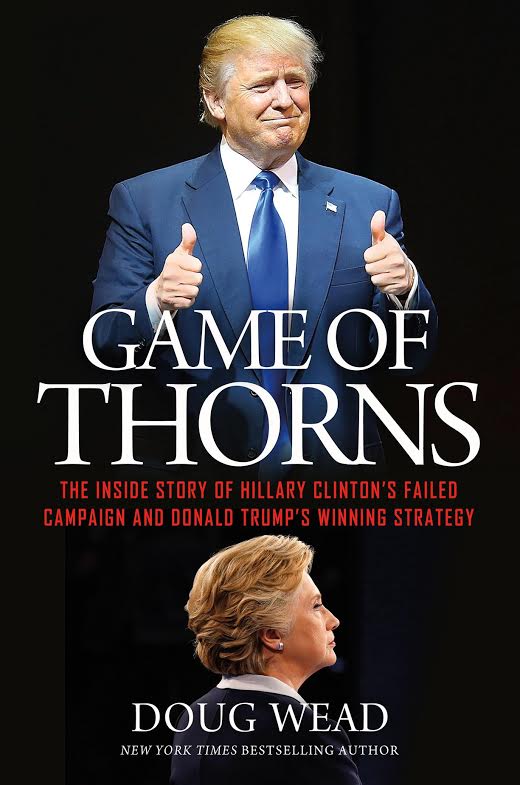 Wead claims the Bush family, feeling “growing concern” over Trump, actually colluded with the Clintons, presumably to derail the Trump campaign. He also hails Reince Priebus for urging Trump not to drop out after the Access Hollywood audio hit, against the advice of other operatives.

Wead’s reputation supposedly earned him the trust of the Trump campaign, providing him unique access, including to sources inside Trump Tower, as well as at Clinton’s Brooklyn headquarters.

One of Wead’s earlier works, All the President’s Children, was a New York Times bestseller and covered the presidents and their families. He’s also worked on ten presidential campaigns. Beginning as a writer for Ronald Reagan in 1979, George H.W. Bush brought him into the White House as special assistant to the president in 1989, and he recently served as a senior adviser to Senator Rand Paul of Kentucky.