“Thank you for braving the cold and thank you for standing up and fighting for freedom,” said Cruz, who was on a roster of speakers that included Sen. Rand Paul (R.-Ky.), Jenny Beth Martin — the leader of the Tea Party Patriots — and members of the House Freedom Caucus. The rally was organized by FreedomWorks, the Washington-based policy and logistics hub for Tea Party and conservative activists. The master of ceremonies was Andrew Wilkow, the host of the XMSirius radio show The Wilkow Majority. 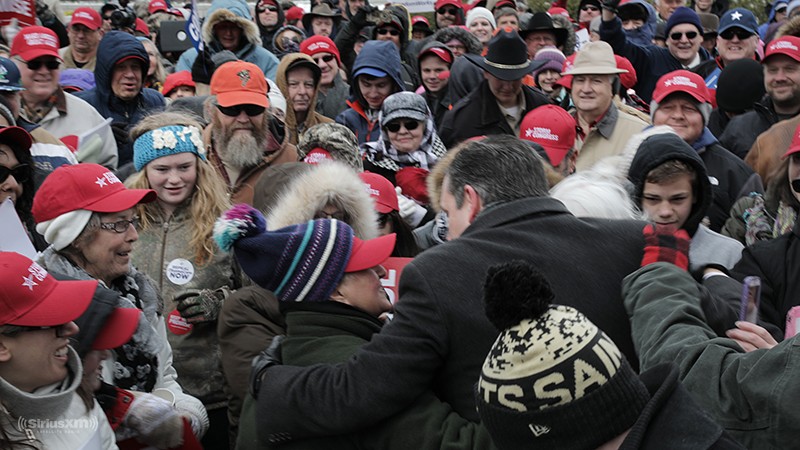 “In November Democrats were shocked, the media was shocked–although I repeat myself, and millions of hard-working Americans across this country rose up and said: ‘Enough is enough and we have a mandate for change.'”

Cruz said Republicans promised for more than six years that if the voters gave them control of the House, Senate, and White House, the GOP would repeal Obamacare.

Now, the GOP controls Congress and the White House, he said. “Well, you know what? We’re out of excuses. The time for talk is over. Now, is the time for action.”

After the rally, FreedomWorks staffers escorted teams of activists to meetings with congressmen and senators, where they advocated for a clean repeal of Obamacare, instead of the bill Speaker Paul Ryan (R.-Wis.) crafted — the American Health Care Act, or RyanCare.

The RyanCare bill does not repeal and replace the 2010 Patient Protection and Affordable Care Act, or Obamacare. Rather it keeps its structure and programs in place. Central to the bill is the support it provides to the insurance companies by preserving the Individual Mandate as a program administered by the insurance companies and the cutbacks to Medicaid. The expansion of Medicaid pulled millions of lower income insurance customers out of the private market, which drastically changed business conditions for the insurance companies.

Now that the American Health Care Act passed the House Budget Committee, the bill is in front of the House Rules Committee, which is tasked with providing the conditions for the bill’s debate on the House floor. As RyanCare moved through the Ways and Means, Energy and Commerce, and Budget committees, it remained unchanged from the exact text the speaker’s office posted March 6 at 6 p.m. Whether or not the Rules committee allows amendments on the House floor will signal if the speaker has the votes to muscle through his text unaltered.