Both sides—pro-Trump activists and anti-Trump activists—showed up in force as a capacity crowd of thousands packed into the Van Wezel Performing Arts center with thousands more watching outside. Interestingly, Trump won this district in the general election by 11 percent, so the outsized show of force from leftists is not representative of the feelings of those in the district, which sprawls along Florida’s southwestern coast.

Despite the clear and concerted efforts to disrupt, Buchanan kept his cool for more than an hour throughout, made his case, and did not buckle under the left’s pressure. When one woman, who identified herself as a lifelong Democrat who has always voted for Buchanan because she likes him personally but despises Trump, remarked that the town hall must have been “as scary for you as it is for me,” he replied: “I’m enjoying it.” 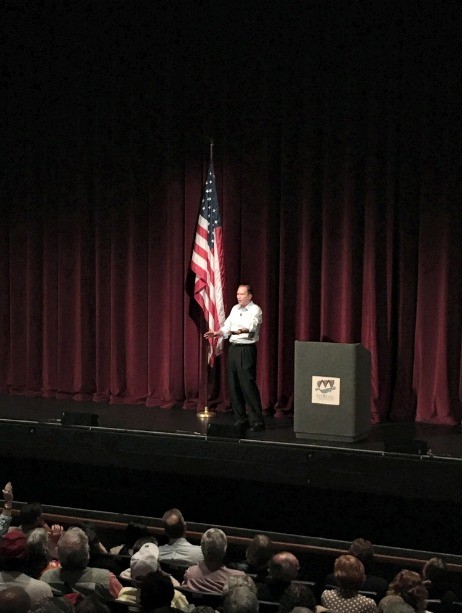 Buchanan speaks to attendees of his 75th town hall

“As a lifelong New Yorker, I’m 71-years-old and lived in Buffalo, New York, and I have known the gestalt and persona of Donald Trump all of my life,” the woman continued with her remarks to Buchanan. “I am asking you, this is a request not a question. From my heart to your heart, this man needs to be removed with the 25th Amendment.”

The leftists inside cheered wildly for nearly a full minute, but Buchanan did not give in.

“In my opinion, it’s not about Trump or Barack Obama—it’s about the voters that supported Trump,” Buchanan said in the pivotal moment, about 45 minutes into the town hall event, after progressive activists hammered him for almost an hour. Half the audience booed loudly, and the other half cheered shouting classic chants often heard at the president’s campaign rallies.

“He won in 31 states. So let’s give him some time to see what he can do and then we have plenty of time to weigh in and I will weigh in if necessary. I want to be helpful for the sake of our children and grandchildren. The bottom line is, he won the election,” Buchanan addded.

Most of the questions that Buchanan fielded were almost identical to those on a sheet circulated on social media by local progressive activists—and pushed by national groups as well, as part of a larger national agenda to undermine the president’s landslide electoral college victory over Democrat Hillary Rodham Clinton. Many of the leftist activists at the town hall wore pink “pussy hats,” woolen knitted caps—even though it was 75 degrees outside. The “pussy hats” were a staple in the women’s marches nationwide the day after Trump’s inauguration.

One group of leftists even inaccurately accused Breitbart News of being a “Nazi, white supremacist organization” after reading a preview story on the town hall before the event started. Buchanan, when he took the stage, noted there were over 5,000 RSVPs to the town hall—which originally was going to be in a local college auditorium but changed to this venue to accommodate the larger crowd size.

The nearly 2,000 people inside, with the exception of conservatives and Trump supporters mixed throughout the crowd, regularly shouted down Buchanan’s answers to questions, screaming their dissatisfaction with the GOP congressman’s ardent support of President Trump. For nearly an hour and a half, with a couple of exceptions, Buchanan was zinged with rough question after rough question—all with the grand design of attempting to pit him against the newly elected GOP president.

Repeatedly, the progressive activists packed throughout the venue shouted nasty, politically-driven pejoratives at Buchanan. Even when he was answering questions, they would shout “answer the question” repeatedly, and yelled “yes or no” many times when he would not give them an answer they wanted. “Healthcare for all,” a sign the progressives want to go even further than Obamacare when it comes to government control of healthcare, was another chant that the activists shouted to open up the event before Buchanan even took the stage.

Most of the questions focused on the House GOP healthcare legislation that would replace Obamacare. Buchanan noted he supports changes to the bill, and is pushing for them. He said right now the process is in the “third inning” of a nine-inning game, and that the it needs to play out more.

This is the first in Breitbart News’s series of stories from Buchanan’s town hall this Saturday in Sarasota. More, including details on the exact questions leftists are pushing Republicans on and a multi-part exclusive interview with Buchanan after the town hall, is forthcoming. Videos and photos of the crowds inside and outside the arena are also forthcoming.