Chris Wallace interviewed Scott Pruitt this week on Fox News Sunday. The result was a veritable train crash for the new EPA chief.

Pruitt struggled to answer some very elementary questions about climate and other environmental matters. Instead, he was forced to resort to legalistic arguments, such as regulatory overreach and the role of State governments.

At one stage, Wallace even interjected:

But, sir, you’re giving me a regulatory answer, a political answer. You’re not giving me a health answer.

The tragedy is that, with proper preparation, all of this could have been easily avoided.

Here are the answers Pruitt should have given:

WALLACE: When the Obama EPA announced its Clean Power Plan, it said that the reduction in carbon pollution would have the following health benefits. I want to put them up on the screen. 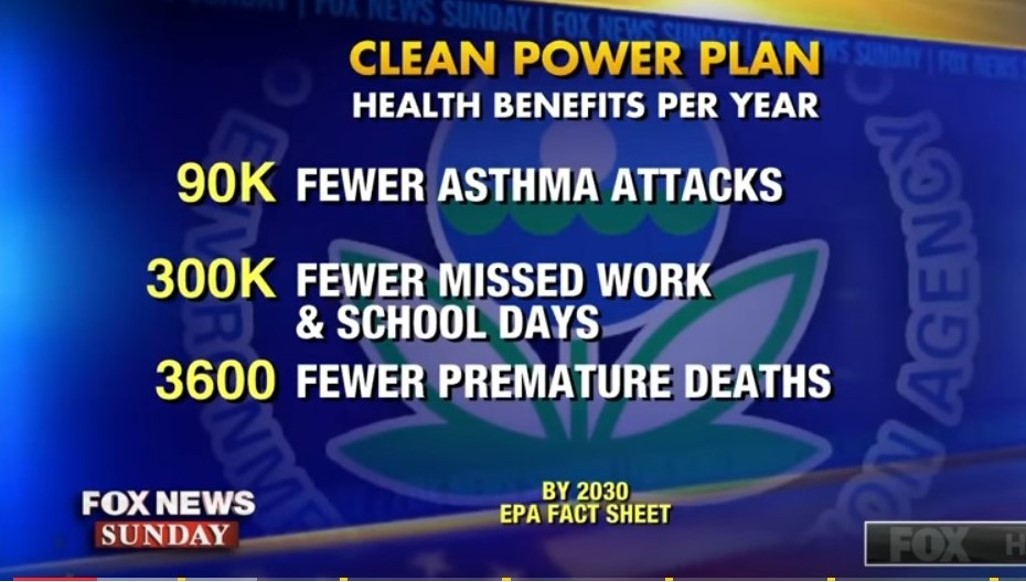 WALLACE: By 2030, it said there would be 90,000 fewer asthma attacks a year, 300,000 fewer missed work and school days, and 3,600 fewer premature deaths a year.
Without the Clean Power Plan, how are you going to prevent those terrible things?

PRUITT: Carbon dioxide does not cause asthma, or any other lung ailments, or for that matter any other medical problems. It is not a pollutant, but a naturally occurring atmospheric gas.

What we should be concentrating on are real pollutants, such as sulphur and nitrogen oxides. These cause genuine health problems, but the levels of these have fallen drastically since 1980. We are totally committed to continue to reduce these sort of pollutants in the air we breathe.

WALLACE: Let me – let me pursue this issue, because President Trump is going to sit down this week with Chinese President Xi. And for years, American presidents have been pushing Chinese leaders to improve greenhouse gas emissions, to reverse them.

Are you comfortable seeing the roles were reversed this week where it will now be the Chinese president pushing President Trump to cut down on pollution?

PRUITT: Under the Paris Climate Accords, China have made no commitment to reduce carbon emissions. On the contrary, they will be allowed to increase them by as much as they want between now and 2030.

The same applies to India, South Korea, and the rest of the developing world across Asia and elsewhere. By contrast, the U.S. is bound by the Treaty to make large reductions in emissions. This is why the President has said we have not got a level playing field.

WALLACE: Well, let me ask a specific question on that. You talk about the Paris Accords, which do call for reductions by China and other countries by 2030. And, in fact, China has already begun reducing its carbon emissions from coal power plants as you well know.

President Xi in January said that the Paris Climate Accord should remain enforced. As the chief environmental officer for the Trump administration, can you make the same commitment to the Paris climate accords?

PRUITT: You are in fact wrong. China has not pledged to reduce emissions by 2030, nor have other developing countries. Indeed, even the UNFCCC admit that the Paris Agreement will actually lead to global emissions increasing until 2030.

Paris represents a bad deal for this country, one which will damage our economy and lead to lost jobs.This is why we need a level playing field.

WALLACE: I’m sorry to rush you along, but we do have limited time, sir. I say respectively. You had a famous exchange a couple of months ago — actually last month that I would like to play right now.

PRUITT: No, I would not agree that it’s the primary contributor to the global warming that we’re seeing.

Mr. Pruitt, there are all kinds of studies that contradict you.

The U.N.’s panel on climate change says it is at least 95 percent likely that more than half the temperature increase since the mid-20th century is due to human activities. NOAA, that’s our own, National Oceanic and Atmospheric Administration, says there’s more carbon dioxide now than in the last 400,000 years, and NOAA says 2015 and 2016 are the two hottest years on record.

Mr. Pruitt, are we supposed to believe that that’s all a coincidence?

PRUITT: Well, for a start the 95 percent claim is totally meaningless statistically. It has been described by one IPCC reviewer as “no more scientific a process than a show of hands.”. Many thousands of scientists actually disagree with the IPCC, and maintain that there are huge uncertainties around the topic of climate change.

As for claims about hottest years, the most accurate measurements of global temperatures come from satellites, and these show that 2016 was no warmer than 1998. The NOAA claims that you quote are based on very sparse surface temperature records, ones which have been continually adjusted over the years to show greater warming trends.

We also know that, here in the US, temperatures were much higher in the 1930s. Scientists also tell us that global temperatures have been higher than now for most of the time since the last Ice Age. The reality is that there are many factors which affect the Earth’s climate, and scientists are a long way from understanding how these work.

WALLACE: You said there, I would not agree that carbon – CO2 – is a primary contributor to global warming. And the question I have is, what if you are wrong? What if, in fact, the earth is warming? What if it is causing dramatic climate change and that we as humans through carbon emissions are contributing to it? Simple question, what if you’re wrong?

PRUITT: Even my predecessor, Gina McCarthy, admitted that the EPA regulations are symbolic and will have no measurable climate impact. And as I have already said, the Paris Agreement will do nothing to cut global emissions.

The real question is whether the price of taking action, and we are talking trillions here, is going to be worth the benefit. People around the world are healthier, better fed, and live longer, happier lives, and all because fossil fuels have provided cheap, reliable energy, which in turn has powered economies and technological development.

Our own citizens have benefitted most from such development, but increasingly people in developing countries are now also beginning to see the benefit. Who are we to deny them this progress?

As a lawyer, Scott Pruitt has all of the legal skills and doggedness to unravel the EPA jungle of regulations set up under the Obama administration. But this is also a political battle, one which will need to be fought against determined and well-entrenched opponents, backed up by a largely subservient and gullible liberal media.

It is absolutely essential, if the war is to be won, that the PR battle is won first. And to do that, Pruitt and others in the Trump administration must be properly briefed with the facts.

We now have the best opportunity we’ll probably ever have to tackle the Green Blob and renewables scam. But to do it, Pruitt and the rest need to be properly briefed and on top of their game.

To foul up now would be a tragedy.

Paul Homewood is a Climate and Energy Policy Analyst.