An Indian-heritage woman doctor is facing a lifetime jail sentence for allegedly helping immigrant Somali mothers cut the genitalia from their two American seven-year-old daughters, and federal officials have promised to wipe out the imported practice which threatens more than half a million American girls and women.

“The Department of Justice is committed to stopping female genital mutilation in this country, and will use the full power of the law to ensure that no girls suffer such physical and emotional abuse,” the acting Assistant Attorney General of the justice department’s criminal division, Kenneth Blanco, said April 13.

“Female genital mutilation constitutes a particularly brutal form of violence against women and girls,” Assistant U.S. Attorney Daniel Lemisch said in a statement. “The practice has no place in modern society,” he claimed.

However, that practice of “Female Genital Mutilation/Cutting” already has a large place in newly diverse America.

The number is high because officials counted the number of daughters of immigrants from African and Arab population countries where small or complete FGM/C is considered healthy and morally good, and is endorsed by orthodox Islamic preachers and texts, largely because it is intended to clip the daughters’ sexual desire. 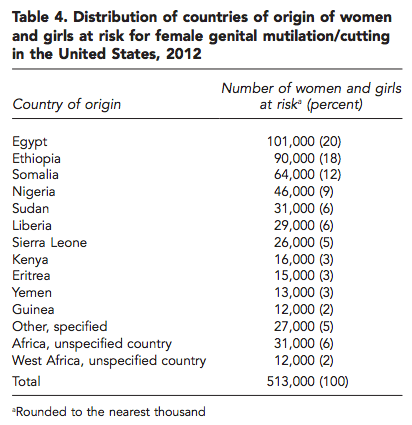 The estimate of real and possible victims is broad because researchers could not directly count the number of wounded girls. Instead, the researchers counted the number of daughters of immigrants from African and Arab population countries where FGM is considered healthy and good. If the number is only 1-in-five of endangers daughters, then the number American girls with sliced genitals would reach 100,000, which would give the immigrant practice a prominent “place in modern society.”

If only one-in-five of endangered daughters are forced to undergo surgery, then the number of American girls with sliced genitals would reach 100,000. 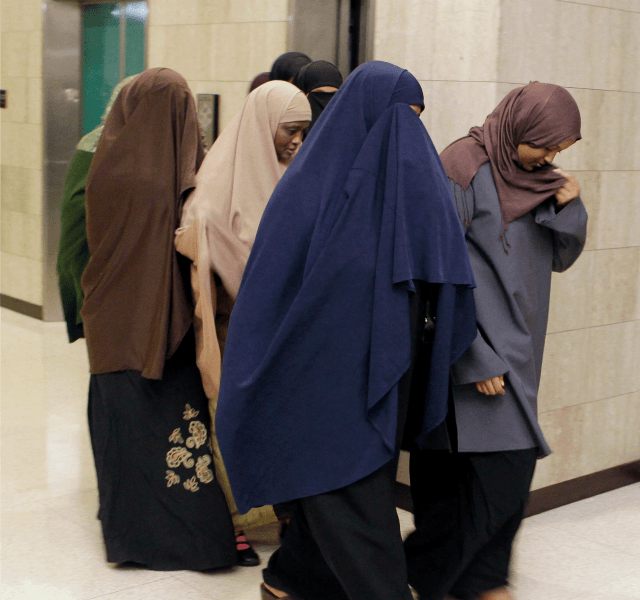 Friends of Somali immigrant Ebyan Farah walk into a Marion County courtroom in Indianapolis in 2010.

In the United Kingdom, medical professionals discovered another 5,000 girls with mutilated genitals during 2017. The practice is now broadly accepted in the diverse United Kingdom, which has conducted no prosecutions against parents since the practice was formally banned in 1985.

In the United States, the practice is endorsed by orthodox Muslim clerics at the dominant Assembly of Muslim Jurists of America. For example, a Muslim cleric and doctor urged fellow Muslim in 2006 to “circumcise” their daughters.

The question is not to ban female circumcision because of the position of certain nations, but How do we regulate it as Muslims? Most of the problem and the bad publicity stem from the fact that, not infrequently, unqualified people perform the procedure and they may do more harm than good. If it was left to the specialists, it wouldn`t have been misused and wouldn`t have gotten such bad publicity. So, it is essential that the medical doctors be trained in the procedure and become the only ones permitted to do it. The surgeon will then judiciously remove what needs to be removed … We however should never doubt anything in our religion because of the bad publicity the media creates about it.

The author of that Islamic advice later quit the Mayo Clinic.

An increasing number of foreign doctors are being imported into the United States from countries where FGM/C is normal, partly because the federal government underfunds training for Americans who want to become doctors. On April 11, for example, Minnesota Sen. Amy Klobuchar filed a bill that would increase the states’ reliance on imported doctors.

DoJ and FBI officials declined to identify the culture or religion beliefs of the two mothers and the doctor. Instead, they merely said the people involved are from “a particular religion and cultural community.”

In the Detroit, case, Dr. Jumana Nagarwala’s parents come from a Muslim community in Northern India. She earned her medical degree with American doctors at the Johns Hopkins University School of Medicine in 1998, and she displays her allegiance by wearing an Islamic head-covering. In Detroit, she worked at the Henry Ford Medical Group. 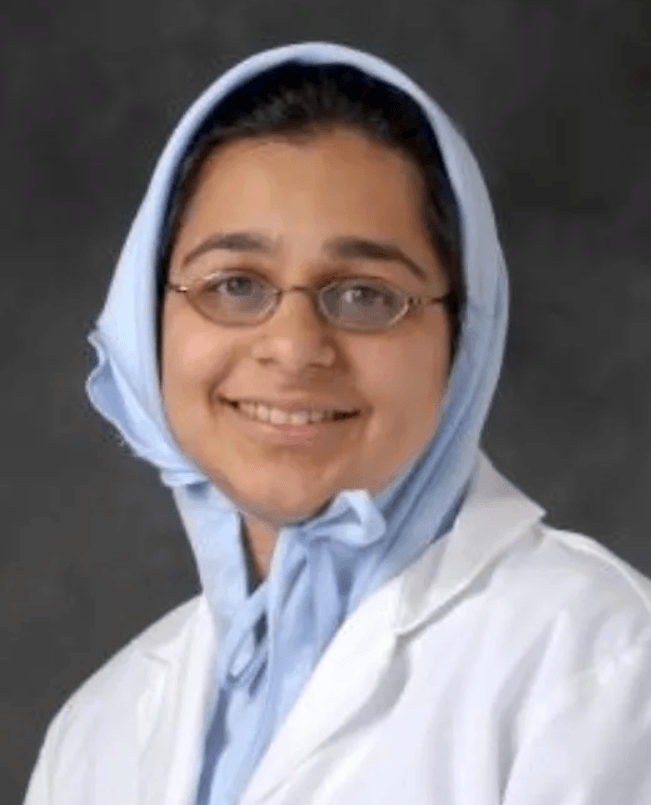 In her conversations with the FBI, Nagarwala denied performing any FGM operations.

The two victimized girls were allegedly brought by their mothers to Detroit from Klobuchar’s state, which includes a large and growing Muslim population from Somalia, and is the state with the third largest number of vulnerable girls. The 2016 study says that roughly 17,000 American girls in Minnesota aged under 18, plus 27,000 adult women, are “potentially at risk for FGM/C.”

The DoJ complaint says that additional victims have been found in Michigan:

This investigation has identified other children who may have been victimized by NAGARWALA between and 2005 and 2007, including children in Michigan. On April 10, 2017, local Child Protective Services personnel and child forensic interviewers employed by the FBI and HSI interviewed several minor girls in Michigan about FGM. In these interviews, multiple minor girls informed Child Protective Services and forensic interviewers that procedures had been performed on their genitals by NAGARWALA … Two parents stated that NAGARWALA had performed procedures on their daughter’s genitals, while others denied knowledge of the procedure or said that it did not happen.

There is no evidence that Americans welcome this additional example of cultural diversity, alongside other imported problems of Muslim attacks, immigrant crime, extensive welfare use by immigrants, and civic fragmentation.

In November, public opposition to these diversity trends helped candidate Donald Trump break through the Democrats’ blue wall in Michigan and other Midwestern states.

A July 2016 poll, for example, showed midwestern voters more concerned about the impact of immigration than any other region  In the Midwest, 54 percent said immigration was a burden, while 29 percent said it was a benefit, creating a 25-point gap in favor of Trump’s pro-American policies on immigration.

After the election, Democratic pollster Stanley Greenberg helped midwestern voters reveal their silent concerns about the civic and economic costs of mass immigration. According to Greenberg’s memo, the voters say their supportive civic culture is being fragmented by the influx of diverse foreign and especially Islamic migrants:

The [voters] are living with a growing number of Muslim immigrants from the Middle East and Dearborn is home to one of the biggest Muslim communities in the United States. That changing demography emerged powerfully in discussions of immigration among the working class women …

Cathy: Although we’re all different. You know, we all have groups, but it does seem as though like there’s still separation – Instead of a community, that this isn’t happening…

[Another person said] “It’s not necessarily the people. It’s the religion and what they were taught. They were taught evil, evil things…it’s that they know any better. So, when you’re taught that, it’s embedded in your mind. Just like I’m Catholic and I believe in, you know, the Virgin Mary and God and everything else. But, they’re not telling me to rape 9-year-olds or to kill, you know, bomb citizens. And it’s what they were taught. So, why, if they would do it there, why wouldn’t they do it here?”…

A majority of the Trump voters in our groups joined in the exchanges lamenting the growing foreignness, concerns about Islam and whether immigrants assimilate in ways that suggested a deeper set of attitudes on diversity, foreignness, and comfort with change … Immigrants and religion were central to the deep feelings about how America was changing, but black-white relations were just barely part of the discussion.

During his campaign, Trump repeatedly showcased the victims of crime by illegal immigrants, which helped to build an emotional bond with critical blue-collar voters who feel rejected by D.C. elites. Since his inauguration, President Trump has directed officials to collate and release information about crime by illegal immigrants, prompting the creation of a new D.C.-based group to help publicize the toll of crimes.

On Thursday, the FBI joined with the FBI in promising to wipe out the FGM crime.

“The allegations detailed in today’s criminal complaint are disturbing,” Special Agent in Charge David Gelios said. “The FBI, along with its law enforcement partners, are committed to doing whatever necessary to bring an end to this barbaric practice and to ensure no additional children fall victim to this procedure.”