Gosh what could possibly have been the motivation of Alexandria shooter James Hodgkinson, the Bernie-Sanders-loving,  Russia-collusion-obsessed liberal activist whose Facebook page boasts about his participation in the Climate March on DC, celebrates the wisdom of Neil Degrasse Tyson, “likes” a cartoon showing Steve Scalise to be in league with the Ku Klux Klan, thinks the U.S. is secretly run by the Koch Brothers, and who signed a petition with the left wing online pressure group Change.org claiming that “Trump is a Traitor. Trump Has Destroyed Our Democracy. It’s Time To Destroy Trump & Co”?

Unfortunately, he left so few clues that we may never know. And it’s not just me who’s puzzled. So too is one of America’s most respected veteran news analysts, CNN’s Wolf Blitzer:

Absolutely. But suppose we were to hazard a wild flying guess, here’s what I think. I think it might possibly be the case that those guys practicing baseball were targeted because they were Republicans.

What’s more, I suspect that one of the reasons Hodgkinson found himself able to take out what one witness called an “AK-47-type weapon” and aim upwards of 50 rounds at a group of unarmed men playing a ball game is that he didn’t think of them as viable human beings. To him, they were just a form of vermin to be exterminated; they were a threat to the U.S and, as far as the gunman was concerned, he was doing his country a favor.

Where did he get this idea? I cannot imagine. But here are some things I found being circulated on social media by impeccable liberal types recently.

This one is from a fairly famous Irish comedy scriptwriter called Graham Linehan, responsible for such lighthearted cult comedy series as Father Ted and The IT Crowd. 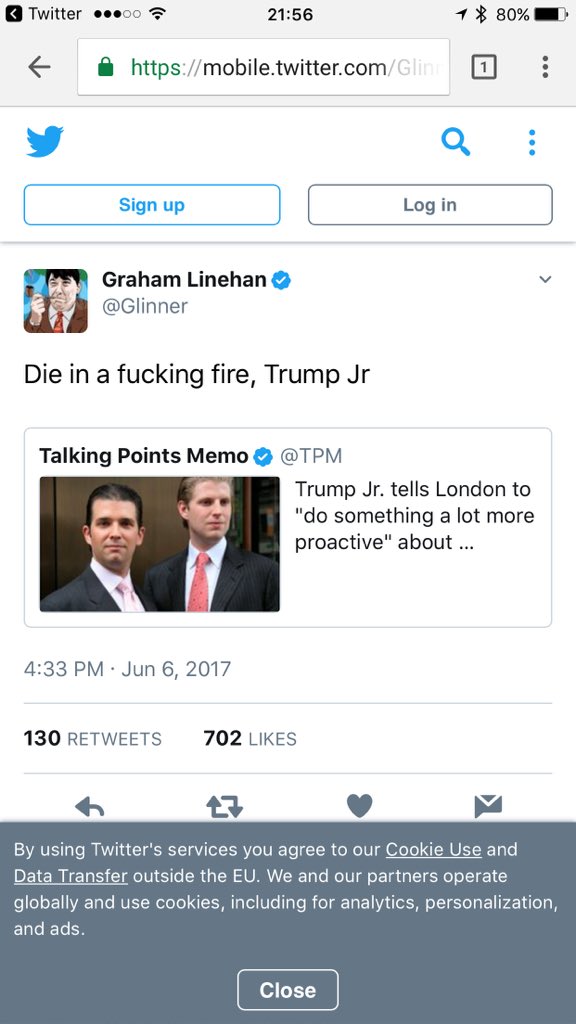 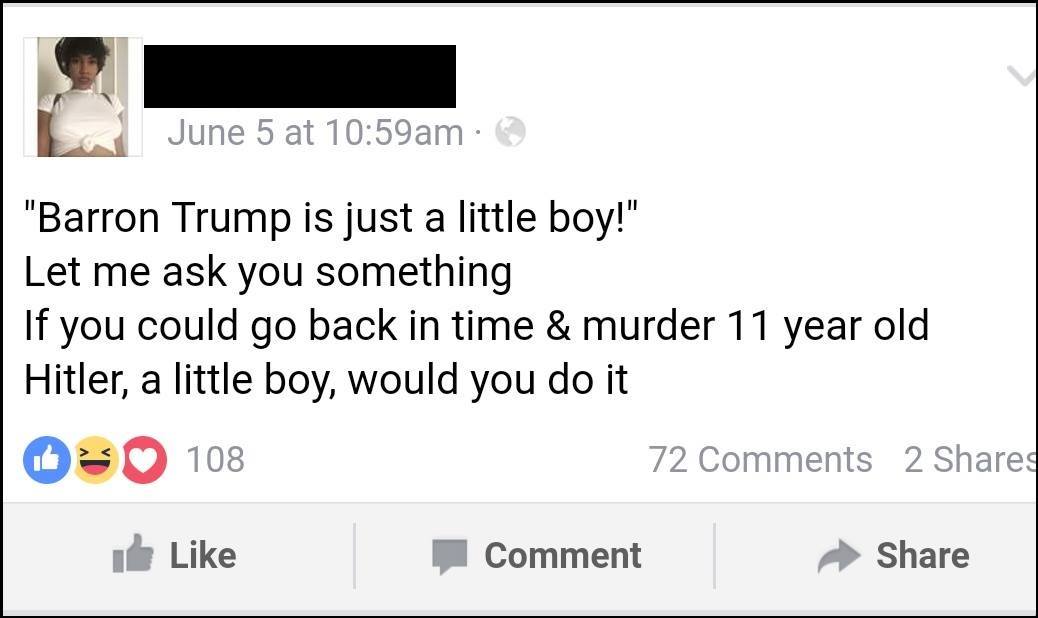 Here’s Jodi – she lectures in economics at Northeastern….

Barron Trump is wearing a shirt that reads "The Expert" and I just threw up in my mouth a little. 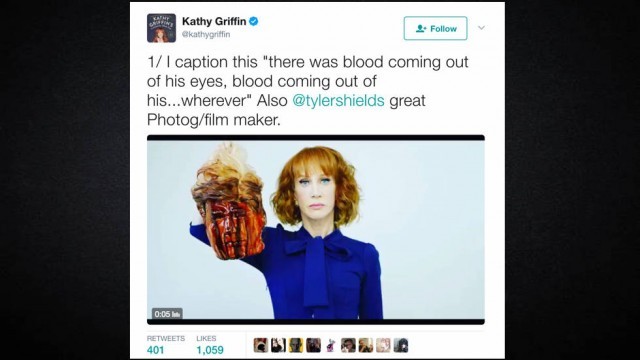 I really didn’t have to look hard for this stuff. It’s everywhere.

We’re told by leftists that, no really, the right is just as bad. Why remember, what happened to Congresswoman Giffords…

Well yes, actually, I do remember.

I remember how desperately the liberal-left MSM sought to blame the act of a random nutcase on what they insisted was the “inflammatory rhetoric” used by Republicans.

But that when providing actual evidence of this “inflammatory rhetoric”, about the best the liberals could come up with was that a Sarah Palin campaign website used crosshairs to symbolize the Democrat politicians she was trying to unseat (not kill, please note; not execute; but just boot out of office using the democratic electoral system), that the word “targeted” even when used metaphorically smacked dangerously of firearms, and that maybe talk show hosts like Rush Limbaugh spoke a bit roughly sometimes about the liberal-left.

And that was it. That was the best they could do.

Can you imagine what a field day the liberal left would be having right now if, instead of Republicans it had been a group of Democrat congressmen shot by a right-wing terrorist?

Well no, actually you probably can’t for the simple reason that the right doesn’t do nasty like the left does.

I’m not saying there aren’t psychotic killers with right-wing affiliations out there. (We had one in the UK last year – the man who murdered MP Jo Cox) But what the left never manages successfully to prove – though Lord only knows, they try hard enough – is that the thing that radicalizes these loons is an aggressive right-wing eco-system of inflammatory media.

That’s because there isn’t one.

Trawl the internet as much as you like. Read the headlines. Listen to the talk shows. Watch TV. No matter how hard you look you won’t find nearly the same level of hatred and aggression from conservatives as you now do routinely from liberals.

Just check out that Graham Linehan tweet above. This, note, isn’t some random angry loon: he’s a paid up member of the liberal elite – an established and successful writer, with a loyal and adoring following of 686,000 on Twitter, more than comfortable in London’s showbiz salons and BBC green rooms – yet he sees nothing weird or shaming or de trop about wishing the son of the U.S. President to “die in a fucking fire.”

I’m not nearly as famous as Graham Linehan, but if I ever said anything nearly as objectionable as that on Twitter, I’d be crucified. The leftie commentariat would be trying to get me banned from Twitter for what they’d no doubt rebrand as “death threats”, they’d be writing to my employers trying to get me sacked.

But such are the double standards of our left-liberal-dominated culture that violent hate like Linehan’s – and Kathy Griffin’s and Jodi Begg’s – is considered perfectly acceptable.

When liberals try to find something similar from the right, they just can’t:

1:27 PM — Of all the clear incitements to violence over the past 7 months, the only example of “coarse rhetoric” that CBS News’ Charlie Rose can think of is “lock her up.”

I don’t expect the liberal-left to change any time soon. They’re angry, they’re frustrated and – thanks to the malign influence of everything from left-wing college professors to the poisonous liberal media – they’re on a downward spiral of cry-bully destruction which I believe can only get worse.

Let’s console ourselves on at least one point, though: all those years where these people have tried to pretend that they are our moral superiors – those days are long, long gone.

You could never have said of the Norwegian mass murderer Anders Breivik or Jo Cox’s killer Thomas Mair or the Tucson 2011 shooter Jared Loughner that their political outlook reflected that of many conservatives.

But you could definitely say of James Hodgkinson – from his favorite political commentators to his views on Trump to the kind of cartoons he liked on social media to his analysis of what’s wrong with America – that he thought very much on the lines of many, if not most mainstream left-liberals.

And there’s the difference. Troubling, don’t you think?