Ireland’s annual “Rally for Life” in Dublin drew some 70,000 marchers Saturday, calling for the protection of the Eighth Amendment to the Constitution, which prohibits abortion.

David Quinn, founder and director of the Iona Institute for Religion and Society, told Breitbart News that the immense turnout for the march “sends a very strong signal to the Government that they are going to meet tremendous resistance in their campaign to remove from our Constitution the right to life of the unborn.”

Prominent pro-life groups teamed together to organise the event, including the Life Institute, Youth Defence, and the Northern Ireland group Precious Life.

Niamh Uí Bhriain of the Life Institute, one of the organisers of the march, said the march was the “real Citizens’ Assembly.”

“This is an incredible, powerful day, when massive crowds of ordinary people turned out to Save the 8th, to say no to abortion and yes to Life,” she said. “We were expecting 50,000 but as the Rally moved through Dublin City, up to 80,000 people brought the city to a standstill as they joined in to Save the 8th.”

The crowds came to say “that we should not repeal the right to life, and that we can do better for mothers and babies than legalising something as barbaric and regressive as killing children before they are born,” Uí Bhriain added.

Ireland has faced increasing international pressure to legalize abortion, and the United Nations has been particularly insistent in imposing its pro-abortion worldview on the small country.

Earlier this year, a UN committee on women’s rights slammed Ireland’s pro-life laws, demanding that the predominantly Catholic nation repeal the Eighth Amendment to its constitution that bans the procedure.

For years, the UN has targeted the Emerald Isle for its unwillingness to allow women to abort their babies, except when the mother’s life is in danger.

In 2014 a UN committee falsely claimed that the Irish Amendment violates international law, and in 2016, AP reported on a ruling from UN human rights “experts” that Ireland’s abortion ban “subjects women to discriminatory, cruel and degrading treatment.”

In its more recent attack, the UN Convention on the Elimination of All Forms of Discrimination Against Women (CEDAW) committee alleged that the 8th Amendment violates women’s human rights because it “unduly restricts access to abortion,” insisting that Irish law be changed to allow “the introduction of amendments to current legislation governing access to abortion.”

One of the marchers Saturday, Aoife Pedruski, said she attended the march because she believed “in the protection of life, from conception until natural death”.

“I have a lot of compassion for women who find themselves in a crisis situation, but at the end of the day I can’t compromise my decision when it comes to the fact that it is life.”

Pedruski remarked on her difficulties when marching past a small but vociferous group of pro-choice demonstrators that came out to heckle the marchers.

“I think everyone is entitled to their own opinion. I wouldn’t go to their march and come at them, I don’t know why they come at us so aggressively. I feel a lot of hatred from them,” she said.

The mainstream media avoided taking pictures of the more offensive materials waved by the pro-abortion group, but one independent photographer, Stephen McElligott, managed to get a couple shots of the activity, which he shared with Breitbart News. 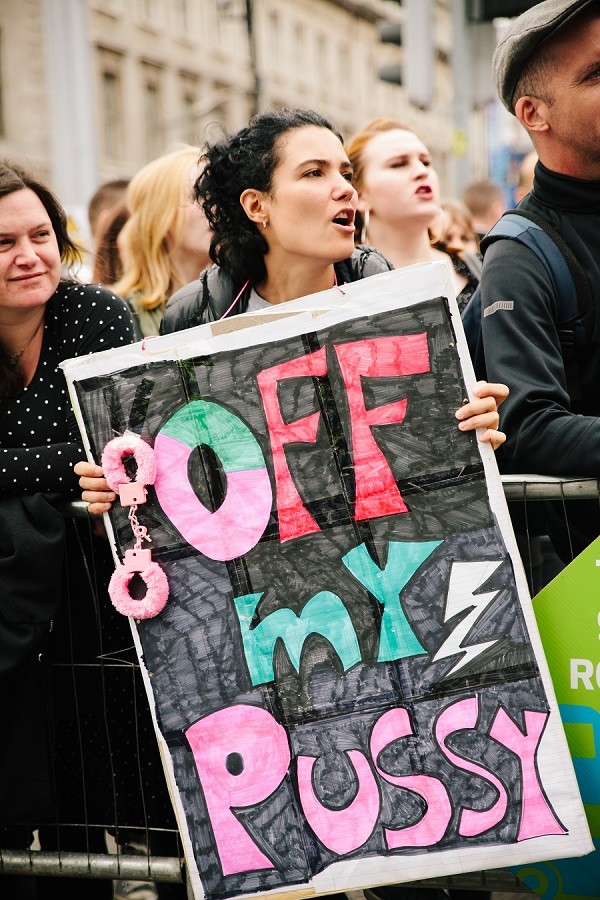 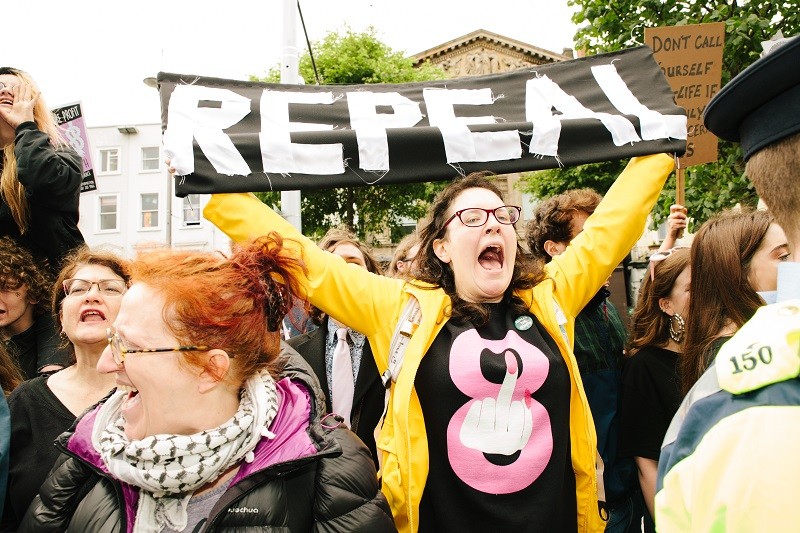 The loudest cheers of the day came for Karen Gaffney, a leading international advocate for people with Down Syndrome who urged the crowd to Save the 8th to protect the right to life of “people like me.”

Gaffney warned the crowds that in other countries, aggressive screening programs meant that up to 100 percent of people with Down Syndrome were being aborted.

“We want to belong, don’t screen us out,” she said.