Some economically-illiterate moron just hijacked Joseph Stiglitz’s email, submitted a really embarrassing article on the economics of Trump’s departure from the Paris Agreement, and actually got it published under his name.

Well that’s the charitable explanation for the execrable piece published today under the title, “Trump and the Truth About Climate Change.”

Under President Donald Trump’s leadership, the United States took another major step toward establishing itself as a rogue state on June 1, when it withdrew from the Paris climate agreement. For years, Trump has indulged the strange conspiracy theory that, as he put it in 2012, “The concept of global warming was created by and for the Chinese in order to make US manufacturing non-competitive.” But this was not the reason Trump advanced for withdrawing the US from the Paris accord. Rather, the agreement, he alleged, was bad for the US and implicitly unfair to it.

While fairness, like beauty, is in the eye of the beholder, Trump’s claim is difficult to justify. On the contrary, the Paris accord is very good for America, and it is the US that continues to impose an unfair burden on others.

Clearly only a sub-literate political activist could have written such hysterical, tendentious, reality-denying drivel.

But if I’m wrong and it really is the work of yer actual Professor Joseph Stiglitz then I think it’s time the Nobel academy asked for the return of the prize they gave him for economics in 2001. I’m not an economics major myself, let alone a feted, Nobel prizewinning professor at Columbia University, but even I can see his line of argument is nonsense.

Where it really falls down is when Stiglitz attempts to make the claim that the Paris Agreement was good for America.

In fact, far more jobs are being created in solar panel installation than are being lost in coal. More generally, moving to a green economy would increase US income today and economic growth in the future. In this, as in so many things, Trump is hopelessly mired in the past.

Truly it is astonishing to read a Nobel-prize-winning economist make such an obviously specious point.

Yes, it’s true – as Paul Homewood notes – that the “solar now bigger than coal” has become a popular meme circulated ad nauseam by climate alarmists and green activists — and celebrated by the credulous: 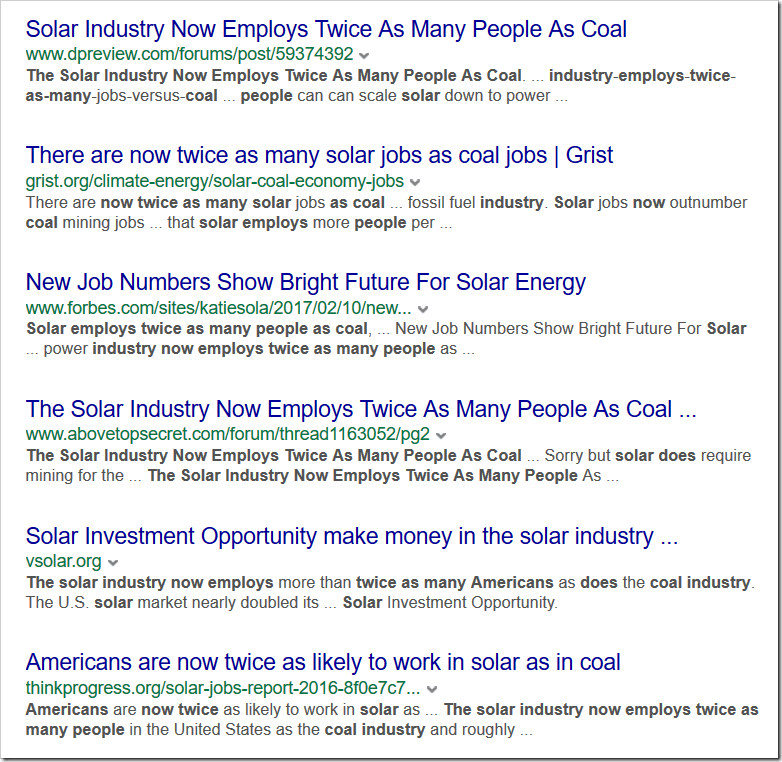 But all that tells us is that lots of people are gullible idiots.

As Homewood notes, few of the jobs in the solar industry are permanent because they mainly involve just installing panels. But even if they were, the figures are meaningless because solar is little more than a boutique industry designed only to salve green consciences while the fossil fuel industry continues to do all the heavy lifting.

Solar power output in the US was just 9 Mtoe in 2015, 0.4% of total energy consumption. On a pro-rata basis, if the US relied solely on solar, the industry would be employing 650 million people, double the entire population!

Like wind, solar is a Potemkin industry which exists only for cosmetic reasons. It does not create value; it is purely decorative; and, as a consequence of this, the jobs it “creates” can in no wise can be considered real or genuinely productive.

As a winner of the Nobel prize for Economics, Stiglitz must surely be familiar with the anecdote often attributed to his fellow Economics laureate Milton Friedman.

Here is one version of it (though, it seems, versions of the story can be found dating as far back as 1935):

At one of our dinners, Milton recalled traveling to an Asian country in the 1960s and visiting a worksite where a new canal was being built. He was shocked to see that, instead of modern tractors and earth movers, the workers had shovels. He asked why there were so few machines. The government bureaucrat explained: “You don’t understand. This is a jobs program.” To which Milton replied: “Oh, I thought you were trying to build a canal. If it’s jobs you want, then you should give these workers spoons, not shovels.”

Whoever originated the story appears to have a much more useful grasp of economics than Stiglitz. The main job of the energy industry is to create energy, not jobs. And even were you to argue that creating jobs is one of its secondary functions, then the last thing you should advocate is pouring money into the renewables industry.

As another economist, Gabriel Calzada Alvarez of Madrid’s Rey Carlos University, found in his 2009 Study On The Effects Of Employment Of Public Aid To Renewable Energy Sources, the subsidized renewable energy industry is a massive job killer:

Optimistically treating European Commission partially funded data1 , we find that for every renewable energy job that the State manages to finance, Spain’s experience cited by President Obama as a model reveals with high confidence, by two different methods, that the U.S. should expect a loss of at least 2.2 jobs on average, or about 9 jobs lost for every 4 created, to which we have to add those jobs that non-subsidized investments with the same resources would have created.

Yep, you read that correctly. For every job “created” by propping up fake industries like solar, 2.2 jobs are destroyed in the real economy.

Joseph Stiglitz, I’m sorry to be the one to break the bad news: but President Trump knows an awful lot more about economics than you do.