WASHINGTON, D.C. — Tea Party Patriots held a Capitol Hill rally on Saturday calling on legislators to keep the promises they made to the American people on issues like repealing Obamacare, enforcing the border and immigration laws and cutting taxes.

Rally attendees enthusiastically held up a myriad of signs, many of which were centered around the theme of the day, calling on GOP members of Congress to keep their promises. Close to 400 people gathered in Upper Senate park for the event.

TPP leader JennyBeth Martin told the crowd, “We have to hold Congress accountable, we have to hold their feet to the fire. President [Donald] Trump needs us so that he can keep his campaign promises.” She said she was going to everything she can and knew that those in the crowd would do everything they can.

Steve Moore, economic advisor on Donald Trump’s 2016 presidential campaign, assured the crowd that Graham-Cassidy would pass in the coming week and “turn Obamacare back.” He told the crowd that they need to “light a fire under the butts of these Republicans.” He also called for cutting taxes by the end of the year, cutting taxes for every small business, a $2,000 tax cut for every family in America and repatriation of funds to the U.S., getting rid of the IRS and getting rid of the current director of the IRS.

When Tom Fitton of Judicial Watch took the stage he spoke of, “the deep state bureaucrats who oppose him ideologically and stand against him to dead minister the administrative state.” He called out IRS Commissioner John Koskinen, asking why he is still in his position. “Why is the justice department in every day and in every way protecting Hillary Clinton,” said Fitton.

The crowd responded with a cheer heard at many a Trump rally, “lock her up”:

Crowd chants “lock her up” as @JudicialWatch @TomFitton talks about Clinton email server investigation @TPPatriots rally on the Hill pic.twitter.com/iaGljO1raI

“We don’t need to reform the tax system, we need to reform the IRS,” Fitton went on to say. He called out the Justice Department for not reopening the IRS criminal investigation. “Why? Because they might have to ask someone by the name of Robert Mueller: Why were you collaborating with Lois Lerner to put in jail the very groups Lois Lerner was suppressing at the IRS?” said Fitton.

“Drain the swamp,” could be heard yelled from the crowd.

Fitton then turned his attention to James Comey, “The real Russia scandal is the Obama surveillance, targeting and illegal classified leaks of, targeting Donald Trump and his team. The real Russia scandal is the FBI director in a fit, leaving the FBI, taking documents with him, authorizing the leak from those documents to the New York Time in order to get a special counsel prosecutor.”

“End it now, shut it down, fire Mr. Mueller,” said Fitton. He said many of Judicial Watch’s lawsuits are a result of the “deep state” not wanting to “turn over documents that might be hurtful to the Barack Obama, Hillary Clinton gang and that might be helpful to Donald Trump.”

Several times during the rally the speakers called on Congress to stop exempting themselves from Obamacare as the rest of America is not exempt.

Martin called on the crowd to pressure Congress to act. 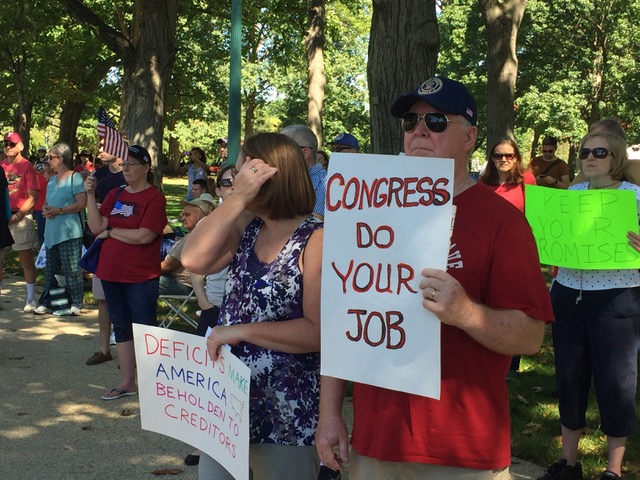 At one point Ft Wayne, Indiana activist Emory McClendon took the stage and led the crowd in a chant of “Keep Your Promises.” He pointed the crowd to look to God to restore and heal America. He then spoke of meetings between activists and legislators where the legislators listened to their grievances and that they worked together to try and form common sense solutions to the problems the country faces, but the legislators haven’t kept the promises they made. He recalled the hard work to get legislators elected, adding that they knew it was going to be a long process to see improvement.

Martin also led the crowd in the same chant at another point, then said, “we expect our laws to be enforced otherwise what is the point in having law?”

Minnesota state Representative Cindy Pugh talked about the first time she came to D.C. Before she ran for elected office she heard Michelle Bachman call to Americans to come to the nation’s capitol for a rally. Pugh didn’t know Bachman at the time, but was struck by the call and hopped on a bus that was headed to the rally from her state. After returning home she started to hear calls from those around her asking her to run for elected office. After saying no many times, she finally decided to take up the charge. She ran and now serves in the Minnesota state legislature.

“It was we the people who elected Donald Trump,” said Art Havenhill of Illinois who remarked that he had to fight against the Republican establishment the whole way.

Linda Dorr of California spoke of her fight with breast cancer and warned against the death panels enshrined in Obamacare that may remain if Obamacare is not repealed in its entirety. 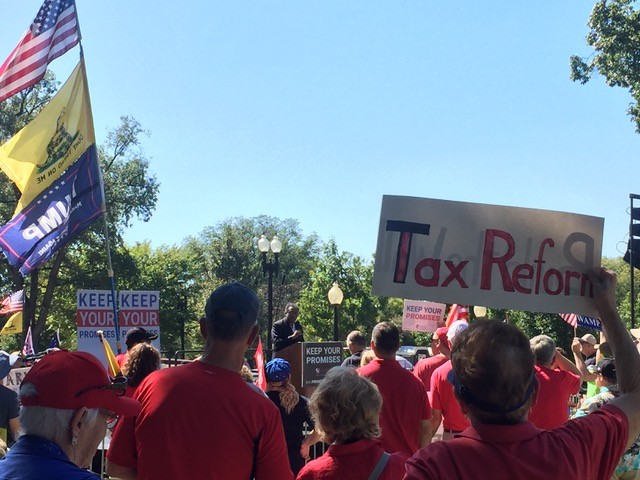 Some of the other speakers included Debbie Dooley of Georgia, Greg Cummings of Iowa, Bob Hall of Indiana, Mark Hager, Phil Kerpen and John Berry.

Martin told Breitbart News that some of the major “promises” they want to see kept include: Obamacare, working towards a debt free future, tax reform and securing the border and the funding to do so. She said she is also hearing from many Americans concerned about what is going to happen with DACA.

Martin told the crowd that people from every state in the nation had been watching a livestream of the event.