Former President George W. Bush discovered this week that all he had to do to make the media finally like him was take a rhetorical swing at Donald Trump.

And it didn’t hurt that he teamed up with Barack Obama to do it. The result was a media swoon. The New York Times crooned: “Without Saying ‘Trump,’ Bush and Obama Deliver Implicit Rebukes.”

Now that their father has teamed up with Obama and the Clintons, the girls are enjoying the sort of media love that only Democrat daughters get. In fact, Barbara and Jenna are kind of like a double Chelsea—with Planned Parenthood fundraising and all.

It’s as if the Obamas, Clintons, and Bushes have formed a sort of Establishment extended family. Dubya even likes to call Bill his “brother with a different mother.”

So is it any wonder that George finally joined Barry, Bill, and Hill in bashing Don? Trump, for all his wealth, has never been one of the beautiful people.

The Establishment despises Trump, but they don’t fear him. They fear his Deplorables—the ordinary Americans from every race, religion, gender, and background who catapulted Trump to victory.

The Deplorables are busy polishing their armor for Steve Bannon’s 2018 “season of war” against the Establishment, which is why Bush rose up to denounce them in his speech on Thursday.

He thinks these Deplorable populists are racists preaching the super dangerous idea that American policies should benefit Americans first (See?! That’s proof they hate foreigners!). He believes this monstrous sentiment must be consigned to the ash heap of history … or, like, wherever they hid Saddam’s weapons of mass destruction so that no one could find them.

For a man who kept quiet throughout all of the Obama years, Dubya sure had a lot to say. Let’s examine the text of his speech to understand what was on his mind—or rather his speechwriter’s mind.

Interestingly, I found the transcript of his speech on the website of Town and Country magazine, between such important articles as “10 Times Royals Wore the Exact Same Dress.”

T and C is the perfect publication for this paean to the Gospel of Globalism, which enriches the few and impoverishes the rest. Bush’s words are tucked happily between the glossy pages displayed on the mahogany coffee tables of his fellow country-club heirs. (Dubya, the son of a U.S. president and the grandson of a U.S. senator, is right at home with this crowd.)

For your amusement, I pulled out 13 key passages from his speech (or at least, 13 passages that had me snickering at my computer screen). Dubya’s words are in bold, followed by my commentary.

Bush was talking to former Army Sergeant First Class Ramon Padilla. Back in 2007, during the Bush presidency, Padilla, serving in Afghanistan, was hit by a rocket-propelled grenade; he lost his left arm and suffered traumatic brain injury. Bush painted his portrait, as part of his book of guilt-expiating oil portraits of the military veterans he sent to war.

The current edition includes 70 paintings. He has a very long way to go before he finishes painting all of the lives he’s damaged.

2. “It’s amazing to have Secretary Albright share the stage with Condi and Ambassador Haley.”

Yes, it’s amazing that Trump’s Ambassador to the United Nations, Nikki Haley, would happily share the stage with not only an anti-Trump neoconservative such as Bush, but also with two other neocons, former Clinton Secretary of State Madeleine Albright and former Bush 43 Secretary of State Condoleezza Rice.

All three of them, of course, were staunch advocates of the Iraq War and all the other U.S. interventions in the last two decades. Haley should know that foreign quagmires are even worse than the D.C. swamp. 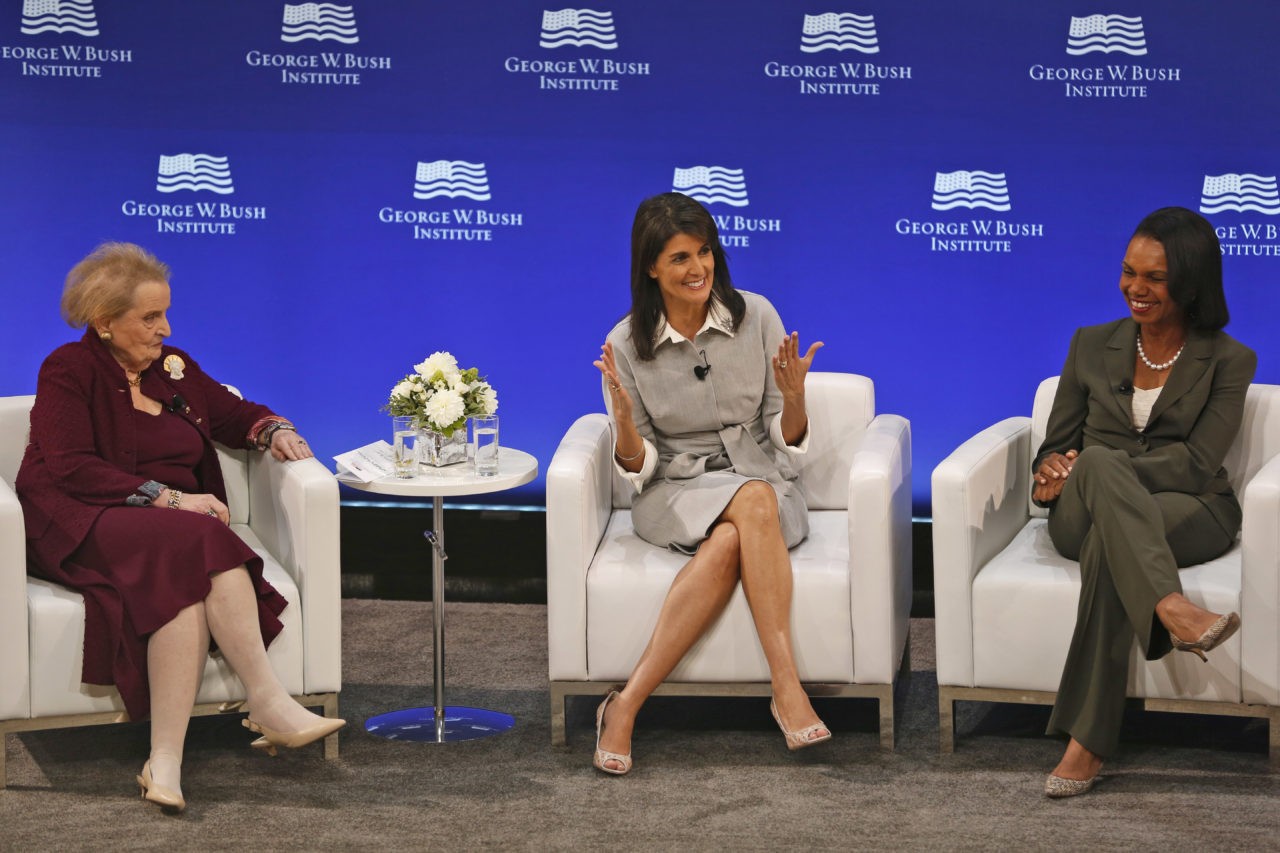 That statement would have been news to such America-builders as Alexander Hamilton, Henry Clay, Abraham Lincoln, and Theodore Roosevelt.

As TR exclaimed in 1895, “Thank God I’m not a free trader. In this country pernicious indulgence in the doctrine of free trade seems inevitably to produce fatty degeneration of the moral fiber.”

It was non-free trade, also known as economic nationalism, that built America. We’ve been coasting for decades on its massive industrial legacy; but as we know, it’s grinding to a painful halt.

4. “For more than 70 years, the presidents of both parties believed that American security and prosperity were directly tied to the success of freedom in the world.  And they knew that the success depended, in large part, on U.S. leadership.  The mission came naturally, because it expressed the DNA of American idealism.”

Speaking of missions and idealism, the idealistic pro-freedom military mission of George W. Bush’s generation was Vietnam. And yet interestingly, with the help of his father, then a U.S. Congressman, as well as others in his well-connected social circle, young George managed to avoid active military duty.

Instead, he got himself into the Texas Air National Guard, dubbed a “champagne unit” because it was so brimming with Bush-types. By all accounts, Bush indulged in more than champagne in that Guard unit.  Indeed, Bush had such a bumpy time that he was ultimately thrown out, although by then, the draft was over, and so it didn’t matter any more.

At any time, of course, Bush could have cleaned himself up and served, but he was in no mood to join the military. In 1973, he began attending Harvard Business School. 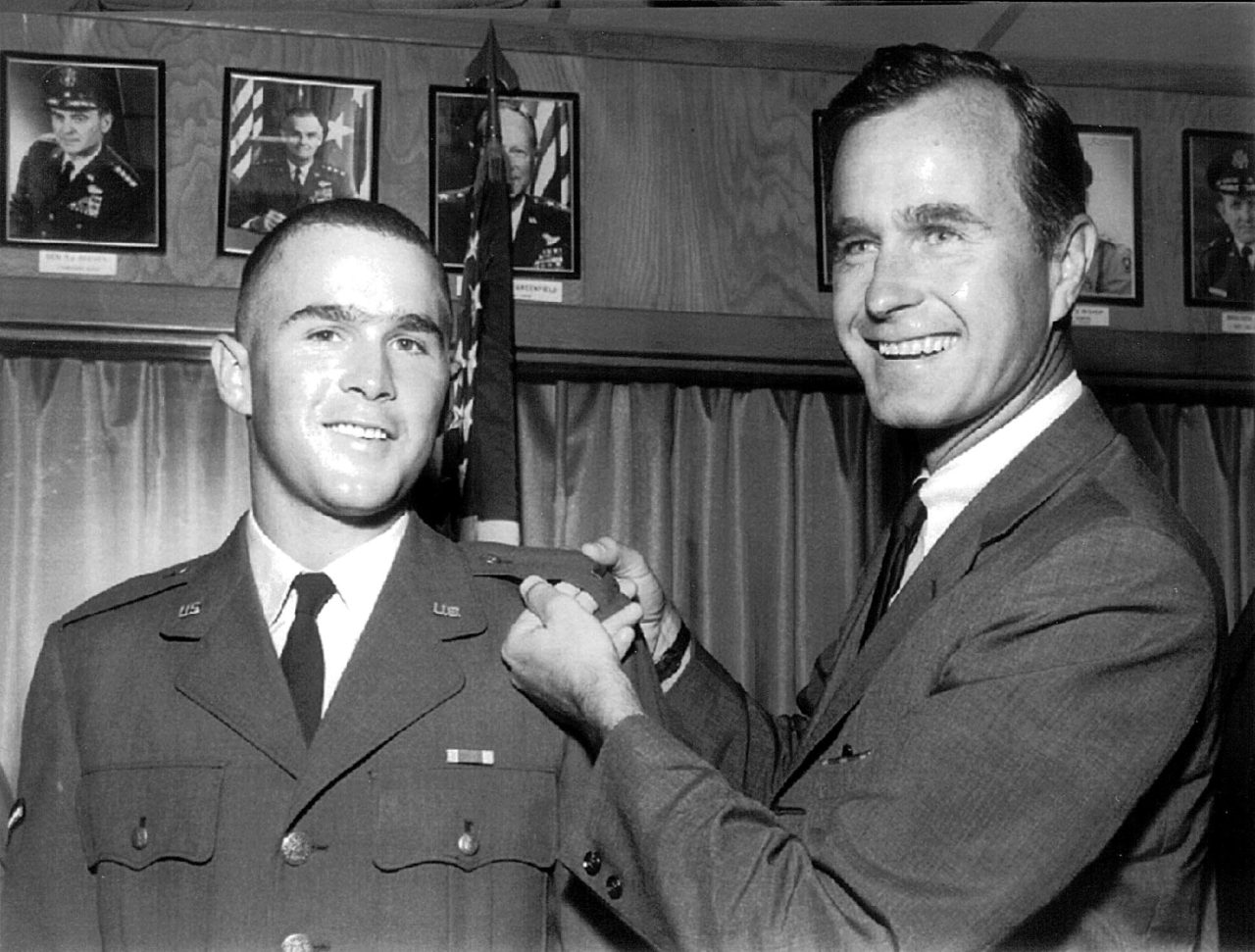 5. “We know, deep down, that repression is not the wave of the future.“

Tell that to Vladimir Putin. Back in 2001, President Bush had this to say about the Russian oligarch: “I looked the man in the eye. I found him very straightforward and trustworthy. I was able to get a sense of his soul.”

I bet he found the reports about weapons of mass destruction in Iraq “very straightforward and trustworthy” too.

6. “Freedom is not merely a political menu option, or a foreign policy fad; it should be the defining commitment of our country, and the hope of the world.”

I get nervous whenever Bush starts popping off about America’s “commitment” to the world. I flashback to 2005, when Bush delivered one of the craziest inaugural addresses in U.S. history.

In it, he declared, “It is the policy of the United States to seek and support the growth of democratic movements and institutions in every nation and culture, with the ultimate goal of ending tyranny in our world.” [emphasis added].

How’s that grandiose mission working out for the world? And for America? Perhaps Bush could ask the wounded veterans whose portraits he painted.

As an aside, the White House speechwriter for that misguided inaugural screed was Michael Gerson, who is now an in-house globalist neoconservative (one of many) at the Washington Post, where he earns a few of the coins that fall off Jeff Bezos’ table by bashing Trump in every column.

7. “In recent decades, public confidence in our institutions has declined.”

Yes, Bush should know all about that. During his time in office, trust in the federal government fell by almost two-thirds, from 60 percent to 24 percent.

Let’s see… a vainglorious war sold under false pretenses, plus the mishandling of Katrina, plus the economic meltdown followed by the big Wall Street bailout… yeah, that’ll do the trick in making Americans distrust their government.

Yet today, seemingly unmindful of his own failed record, Bush wants to lecture us about restoring trust.

8. “We’ve seen nationalism distorted into nativism—forgotten the dynamism that immigration has always brought to America.”

Legal immigration, properly limited, with enough time for new arrivals to assimilate, has indeed been a blessing.

But the legal immigrants must come here as full citizens, not as low-wage indentured servants, which is currently the case for those coming here on H-1B visas and H-2B visas. Nor do we need low-wage illegal immigration to further drive down the wages of American workers.

And speaking of illegal immigration, we must ask: How’d that work out for the Roman empire?

9. “How do we begin to encourage a new, 21st century American consensus on behalf of democratic freedom and free markets? That’s the question I posed to scholars at the Bush Institute. That is what Pete Wehner and Tom Melia, who are with us today, have answered with ‘The Spirit of Liberty: At Home, In The World,’ a Call to Action paper.”

Brace yourself, America. The Bush globalists and neocons are back.

They’re ready with their plans and papers, eager to call us to action.

And when we invade a new country, the people there will throw flowers at us and call us liberators—just like the neocons said the Iraqis would.

10. “In serving as a shining hope for refugees and a voice for dissidents, human rights defenders, and the oppressed.”

It might be worth pointing out that Bush has left much of the Middle East in ruins, even as groups of Islamic jihadis grow ever stronger.

Have you ever noticed that when Bush wants to take a conscience-salving trip somewhere, he goes to Africa—not the Middle East?

11. “We should not be blind to the economic and social dislocations caused by globalization.  People are hurting.  They are angry.  And, they are frustrated. We must hear and help them.”

In the White House, Bush didn’t do a thing to help the hurting.

His biggest domestic ideas were the partial privatization of Social Security and, of course, his attempt to further open the U.S.-Mexico border to depress the labor market for the working class Americans most hurt by globalization.

So why should we trust him now?

12. “The ‘Call to Action’ calls on major institutions of our democracy, public and private, to consciously and urgently attend to the problem of declining trust.”

There he goes again talking about “declining trust.” Funny, every time he says that I think of three little letters: WMD.

13. “It is time for American institutions to step up and provide cultural and moral leadership for this nation.”

Leadership from Bush? And your family, including ¡Jeb!? And your friends the Clintons? Seriously? That’s your idea?

No, please don’t “step up.” Just step away. All of you. Permanently.

In fact, remember that hidey-hole they found Saddam Hussein in? Can someone please build one of those in Dallas or Kennebunkport and escort George to it? Give him some pretzels, non-alcoholic beer, and a satellite feed of the Rangers’ games. He’ll be happy, and so will the rest of us.

If he must stay above ground, he can at least spare us any more speeches. This one was enough.

It was a feast of smirking self-satisfaction like the kind Bush was famous for, combining low ability with an unwarranted sense of superiority.

That’s our Bush. And now that he’s figured out how to make the media like him, I’m afraid we’ll be seeing a lot more of him. And his whole damn family.