The Department of State says more than U.S.-based 300,000 foreign refugees can be returned home safely in the next few months, says a Friday report in the Washington Post.

The department’s statement clears the way for the Department of Homeland Security to announce on Monday that it will not renew the Temporary Protected Status documents which allow 60,000 of the 300,000 foreigners to stay and work in the United States. The DHS will announce decisions for the other 240,000 refugees by January.

The gradual return of the 300,000 Central Americans and Haitians — including their educated children — would be a huge aid program for their home countries, but it is strongly opposed by Democratic politicians and business groups in the United States.

The threatened loss of TPS status for 300,000 diverse refugees will further pressure reluctant Democrats to bargain with President Donald Trump, who has already announced the end of the DACA program for 690,000 current beneficiaries. Trump has repeatedly said he expects the Democrats to agree to halt chain migration and the visa lottery program as part of any negotiations to legalize 690,000 current DACA beneficiaries.

On Tuesday, Secretary of State Rex Tillerson sent a letter to acting DHS secretary Elaine Duke to inform her that conditions in Central America and Haiti that had been used to justify the protection no longer necessitate a reprieve for the migrants, some of whom have been allowed to live and work in the United States for 20 years under a program known as Temporary Protected Status (TPS).

Tillerson’s assessment, required by law, has not been made public, but its recommendations were confirmed by several administration officials familiar with its contents. The officials spoke on the condition of anonymity to discuss internal deliberations.

The Department of Homeland Security has a Monday deadline to announce whether it will extend the Temporary Protected Status for almost 60,000 Hondurans and roughly 2,500 Nicaraguans, whose temporary stays were repeatedly and routinely extended by prior administrations. “It is fair to say that this administration is interpreting the law, exactly as it is, which the previous one did not,” an administration official told the Washington Post.

The Hondurans were permitted to remain in the United States in 1999 after Hurricane Mitch hit the country.

The Nicaraguans also were given TPS status in 1999 because of Hurricane Mitch.

In early January, the DHS must also decide whether to extend TPS status for 200,000 people from El Salvador, who were permitted to stay in 2001 after their country was hit by earthquakes. 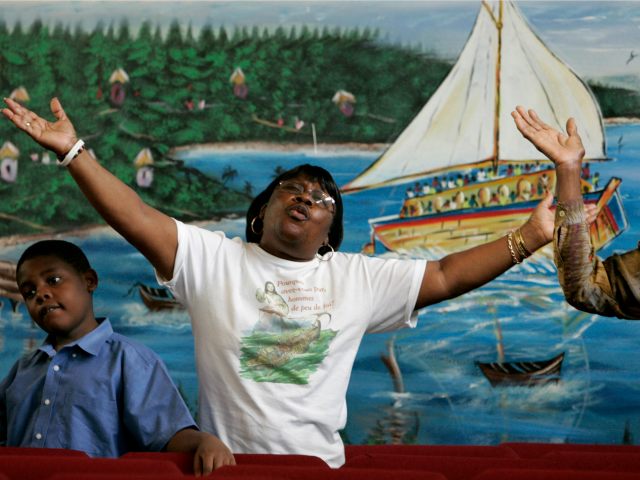 A Haitian woman prays at the Notre Dame Catholic Church in Miami, Jan. 5, 2007. She and others were appealing to Florida Gov. Charlie Christ to support their request for Temporary Protected Status.

Left-wing groups are already trying to keep the large populations of foreigners in the United States. In an article headlined “TPS Holders Are Integral Members of the U.S. Economy and Society,” the Center for American Progress claimed that “TPS holders are essential contributors to the U.S. economy and society.”

But TPS holders are generally unassimilated and uncompetitive in the U.S. economy, and their departure from the labor market will increase pressure on U.S. companies to raise Americans’ wages and to invest in more labor-saving machinery.

A 2017 study of TPS holders, published in the Journal on Migration and Human Security, reported on people from El Salvador, Honduras, and Haiti, saying:

Eighty-seven percent of the TPS population from these countries speaks at least some English, and slightly over one-half speak English well, very well, or only English…

To keep the TPS-holders in the United States, Democrats say that they have 273,200 U.S.-born citizen children, and argue that remittances from TPS-holders help their home economies.