“I know for a fact that there is a lot that that woman does not tell the truth on,” Nelson claimed in an in-person interview with Breitbart News.  “Do I think that Beverly is trustworthy? No, I really don’t. Could I see her making it up? …The odds are in that favor.”

Beverly Nelson, 55, gave a press conference earlier this week at which she claimed that Moore sexually assaulted her in a car in December 1977 or early January 1978 when she was a 16-year-old high school student.   Nelson said the alleged assault took place outside a restaurant in Gadsden, Ala., where she says that she worked as a waitress. Nelson is being represented by controversial attorney and women’s rights advocate Gloria Allred.

Darrel Nelson stated that he is not close to his stepmother, but they talk every few months and that they are not on bad terms. He said that he is in regular contact with his father, John Nelson, Beverly’s husband for the past thirteen years. 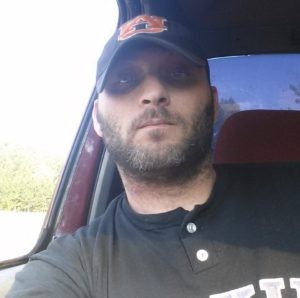 Darrel Nelson said that his father called him yesterday to ask him to take down a video from Facebook in which he also alleged that his stepmother’s accusations are untrue.  Since then, Nelson has posted several more videos doubling down on that claim.

During the interview here in Attalla, Nelson surmised numerous times without offering any evidence that Beverly Nelson was getting paid to make the accusations against Moore.

“There is a lot of details that just does not add up,” he stated.  “Do I believe that she is being paid? I have got a feeling that that is so.”

“It’s got to be money. Financially, I really do believe that she is out for the money part. Somebody is paying somebody. It seems awful funny. Twenty-five days or so until the election. Why wait until just now to start doing all of this?”

Beverly Nelson says that she told her husband about the accusations against Moore before they got married. “Before I married my husband, John, I told him what Mr. Moore had done to me,” she said alongside Allred at the news conference.

Darrel Nelson said that neither Beverly nor his own father ever mentioned the claims against Moore.

“If she told him, you would think that somewhere along the conversations of talking to his son and talking to his family that he would’ve mentioned something like that. That’s something you don’t hide from anybody,” he said.

Nelson added: “In all of the years that my dad has been married to her up until the other day when my mother said that you got to go check out the news to see what your stepmother is doing, that is the first time in all of the years that I have known that woman that I have ever heard of this. I have never heard of this. My dad has never spoke of this. If something massively happened this way, why would you not tell your family?”

Still, it is not unusual for sexual assault accusers to keep largely silent about their experiences for a host of reasons, including shame, guilt, fear of reprisal, and other issues.

Asked to comment on his own father’s support for Beverly in light of Darrel’s allegation that his stepmother is being dishonest, Darrel replied about his father: “The only thing he is guilty of is protecting his wife.”

“I am not going to say that he is in on it because I don’t believe he is,” Darrel Nelson continued. “But the only thing that he is guilty of is protecting his wife. There’s nothing I wouldn’t do for my wife. So, if you are a good man you protect your wife, wrong or right.”

Nelson claims that the charges against Moore are being used for political reasons “to remove him and get him out where they can get a Democrat in. Because if he goes out that gives that other guy a straight shot in.”

During the interview, Nelson was quite open about a criminal conviction when he was a teenager for which he served time. He says that he has since turned his life around.

He was also open about his right-leaning politics. On Facebook, he posted photographs of himself with the confederate flag attending protests in New Orleans in May against attempts to take down Confederate monuments from the city.

However, Nelson claims that under certain conditions he would also speak out if his stepmother had accused a Democrat. “I would speak out on their behalf if it was a Democrat who is on the up and up. If it was against Doug Jones if he was a good guy and he did not do no wrong and he was not corrupt.”

Beverly Nelson gave a press conference in New York at which she said that she originally met Moore when he was a 30-year-old deputy district attorney in Etowah County and would regularly eat at a restaurant in Gadsden called Olde Hickory House.

Beverly Nelson claims that Moore used to compliment her on her looks and that he signed her yearbook in 1977 sometime just before Christmas.

About a week or two later, she says that Moore offered her a ride home. “I trusted Mr. Moore because he was the district attorney,” she said at the news conference. “I thought that he was simply doing something nice.”

Nelson claims that Moore drove her to the back of the restaurant, where he proceeded to grope her breasts, pull the area in the back of her neck and try to force her toward his crotch. “I thought that he was going to rape me,” she said. “I was twisting and I was struggling and I was begging him to stop.”

Eventually, Nelson says that Moore let her out of the car and told her that “no one will ever believe you” if she ever mentioned their encounter to others.

Moore has strenuously denied Beverly Nelson’s accusations. “I can tell you without hesitation this is absolutely false,” Moore told reporters reporters. “I never did what she said I did. I don’t even know the woman. I don’t know anything about her. I don’t even know where the restaurant is or was.”

Moore has also denied allegations from four others, including a woman who went public with her accusations against Moore in a Washington Post interview in which she alleged that Moore attempted to initiate sexual contact with her in 1979 when she was 14. Three other women between the ages of 16 and 18 claim that when Moore was in his 30s, he attempted to court them or that he dated them.  The current age of consent in Alabama is 16.

On Wednesday, more women went public alleging inappropriate sexual conduct, including a Gadsden woman who claims that Moore groped her in his office when she was 28 and Moore was married.