Under the Visa Lottery program, championed by former Sen. Ted Kennedy and Sen. Chuck Schumer (D-NY), the U.S. randomly gives out 50,000 visas every year to foreign nationals from a multitude of countries, including those with known terrorism problems – such as Afghanistan, Algeria, Egypt, Iraq, Lebanon, Libya, Nigeria, Saudi Arabia, Somalia, Trinidad and Tobago, Venezuela, Yemen, and Uzbekistan. Winners have undergone only minor screening from immigration officials, even when their ideology is hostile to American laws and culture.

A new poll by Pulse Opinion Research shows overwhelming support among Americans for eliminating the Visa Lottery, with 60 percent saying the program should be ended. Less than 30 percent of likely voters said the Visa Lottery should remain in place. Another 11 percent said they were “not sure.” 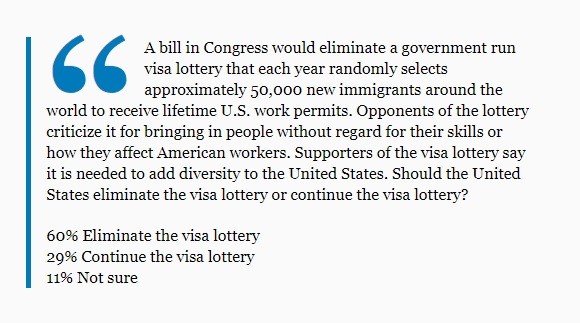 The poll revealing widespread support for ending the Visa Lottery comes as President Trump has said that he wants the program ended immediately following two terrorist attacks in which both terror suspects were either directly or indirectly beneficiaries of the Visa Lottery.

For example, suspected ISIS-inspired New York City terrorist, Uzbek national 29-year-old Sayfullo Saipov, who is accused of murdering at least eight individuals, entered the U.S. in 2010 by winning one of the 50,000 visas randomly allotted in the Visa Lottery.

Ullah, like Saipov, was the beneficiary of the Visa Lottery, only being allowed to enter the U.S. through Bangladesh because his relative had come to the country as a Visa Lottery winner, as Breitbart News reported.

Since 2007, the U.S. has imported nearly 30,000 foreign nationals from Iran, Syria, and Sudan — three countries which support international terrorism — through the Visa Lottery, Breitbart News reported.

The U.S. has brought in nearly 21,000 Iranian nationals, 2,732 Sudanese nationals, and 812 Syrian nationals on the Visa Lottery — not counting the subsequent foreign relatives of additional unscreened people from those countries — even though all three countries are listed as state-sponsors of terrorism.

Between 2012 and 2016, Breitbart News reported, 72,794 foreign nationals have come to the U.S. on the Visa Lottery program from countries that the Immigration and Customs Enforcement (ICE) agency has designated as terrorist sponsors. This data reveals that in the last five years, about 30 percent of all foreign nationals who have arrived in the U.S. on the Visa Lottery have come from terror-sponsoring countries.

Though Trump and voters have repeatedly demanded an end to the Visa Lottery, and there is bipartisan support for such a plan, the Republican leadership in the House and Senate has yet to consider the initiative.

Every year, the U.S. admits more than 1.5 foreign nationals, with the vast majority deriving from family-based chain migration, whereby naturalized citizens are allowed to bring an unlimited number of extended foreign family members to the country. In 2016, the legal and illegal immigrant population reached a record high of nearly 44 million. By 2023, the Center for Immigration Studies estimates that the legal and illegal immigrant population of the U.S. will make up nearly 15 percent of the entire U.S. population.