President Trump’s amnesty plan would potentially give a pathway to U.S. citizenship to an illegal alien population that is roughly six times the number of illegal aliens that were given temporary amnesty under former President Obama.

An almost final draft of the White House’s expansive amnesty plan obtained by Breitbart News reveals that the Trump administration would be expanding Obama’s federal, temporary amnesty—known as the Deferred Action for Childhood Arrivals (DACA) program—to six times the number of illegal aliens who are enrolled in the DACA.

Once an amnesty goes beyond legal status for DACA-enrolled illegal aliens, it essentially becomes uncontrollable. Short/Kelly/Nielsen/Miller plan does that. https://t.co/eMk61Yx3nJ

Currently, there are nearly 800,000 illegal aliens enrolled in Obama’s DACA program. The White House amnesty plan would potentially sextuple this number of illegal aliens receiving amnesty and a pathway to citizenship.

Likewise, as Breitbart News reported, it is plausible for the White House plan to become entirely open-ended and thus never-ending, much like the 1986 amnesty, critics and experts say.

A copy of the White House amnesty obtained by Breitbart News reveals that the DHS secretary would have nearly all control over the size and implementation of the amnesty with no end date for when illegal aliens can no longer apply for the pathway to citizenship.

The amnestying of 4.5 million illegal aliens under the White House amnesty would mean an instant depression of American workers’ wages and an enormous increase in the number of now-legalized foreign workers that Americans will have to compete for jobs against in the workforce.

Every year, the U.S. admits more than 1.5 million foreign nationals, with the vast majority deriving from family-based chain migration, whereby newly naturalized citizens can bring an unlimited number of foreign relatives to the U.S. In 2016, the legal and illegal immigrant population reached a record high of 44 million. By 2023, the Center for Immigration Studies estimates that the legal and illegal immigrant population of the U.S. will make up nearly 15 percent of the entire U.S. population.

The White House amnesty plan does not immediately reduce mass legal immigration levels, allowing more than 1 million immigrants to continue arriving in the U.S. over the course of potentially two decades. This portion of the amnesty plan is particularly not in-line with what American voters say they want in a legal immigration system. 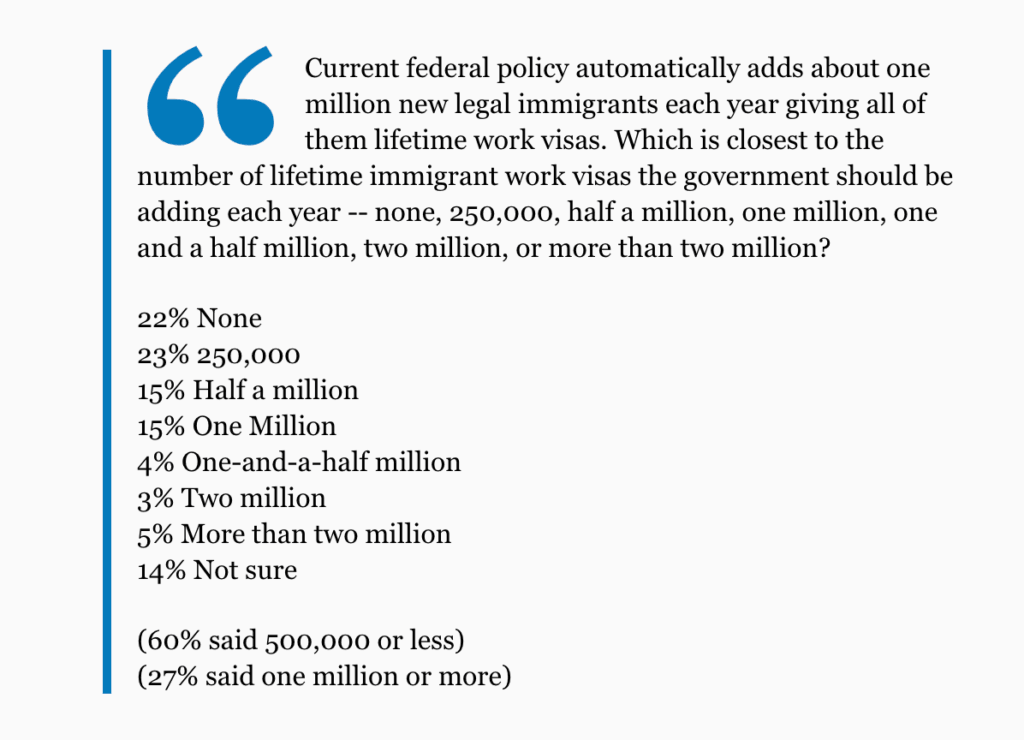 If the U.S. does not reduce current legal immigration levels in the next two decades, between seven and eight million foreign-born voters will be added to the American electorate, as Breitbart News reported, potentially making states like Texas, Florida, and Virginia solid Democrat voting blocs, as immigrants are vastly more likely to vote for Democrats over Republicans.

The Hispanic vote in Texas will continue to increase. By 2024 Democrats can win Texas, Arizona and Florida. A big blue wall of 78 electoral votes. https://t.co/6FT0NJyjyP

Democrats like the former Mayor of San Antonio, Julian Castro, now openly admit that mass immigration to the U.S. is a Democrat-voter initiative.