President Trump’s election and a question that would ask United States residents if they are citizens of the country are unlikely to reduce participation in the upcoming 2020 Census, a new study reveals.

Center for Immigration Studies Director of Research Steven Camarota’s study released this week shows there is no indication in recent Census survey patterns that suggest U.S. residents would be more turned off to answering the 2020 Census because of the Trump presidency or if they were asked if they are an American citizen.

Not since 1950 has the U.S. federal government asked residents if they are citizens of the country on the full Census. For the 2020 Census, Attorney General Jeff Sessions’ Department of Justice (DOJ) has requested Commerce Secretary Wilbur Ross to add the citizenship question to the full survey.

Kansas Secretary of State Kris Kobach, likewise, has urged Ross to add the citizenship question to the Census in order to know “the exact number of citizens in our states.”

The open borders lobby and Washington, D.C. establishment figures, though, have claimed that asking residents if they are citizens on the Census will drastically reduce Census participation.

Camarota’s research finds no proof backing up this claim.

For example, Camarota found no significant increase in the number of respondents who refused to participate in the 2016 American Community Survey (ACS), the Census Bureau’s largest survey.

Between 2015 and 2016, ACS participation rates dropped by only 0.1 percentage points. Camarota says the drop is on par with past years, noting that respondents’ refusal to participate in the survey has been increasing since 2006. 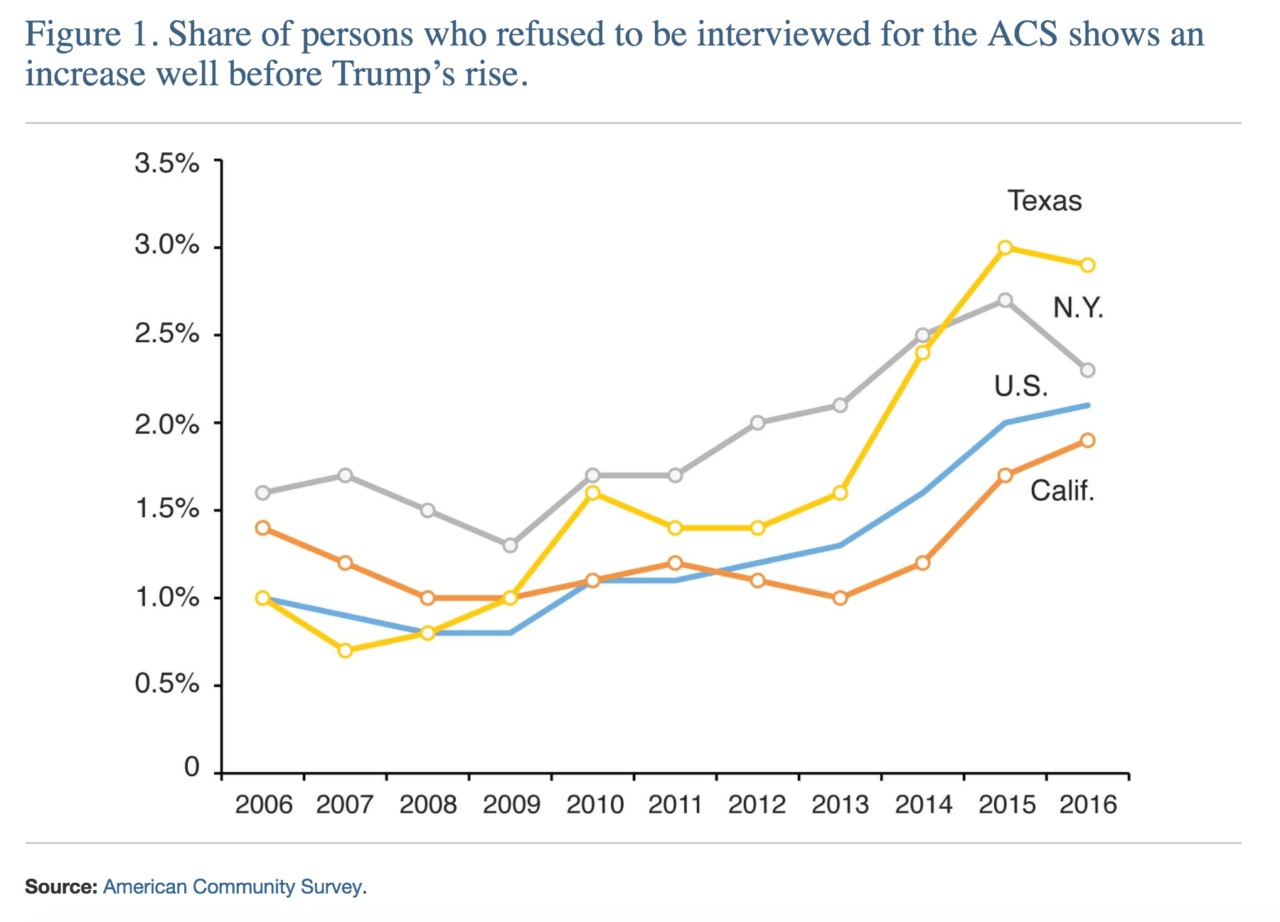 More specifically, when Camarota looked at how many respondents had left the citizenship blank or gave nonsensical responses, he found that the rate did not increase between 2015 to 2016, once again showing no “Trump Effect.”

Also, the open borders lobby’s claim that asking the citizenship question will scare off foreign-born, noncitizen Census respondents is not backed up by any data from previous years.

Instead, Camarota’s study found that on the Census Bureau’s monthly Current Population Survey, between January 2014 and January 2018, there has been no drop in the foreign-born population’s participation in the survey. 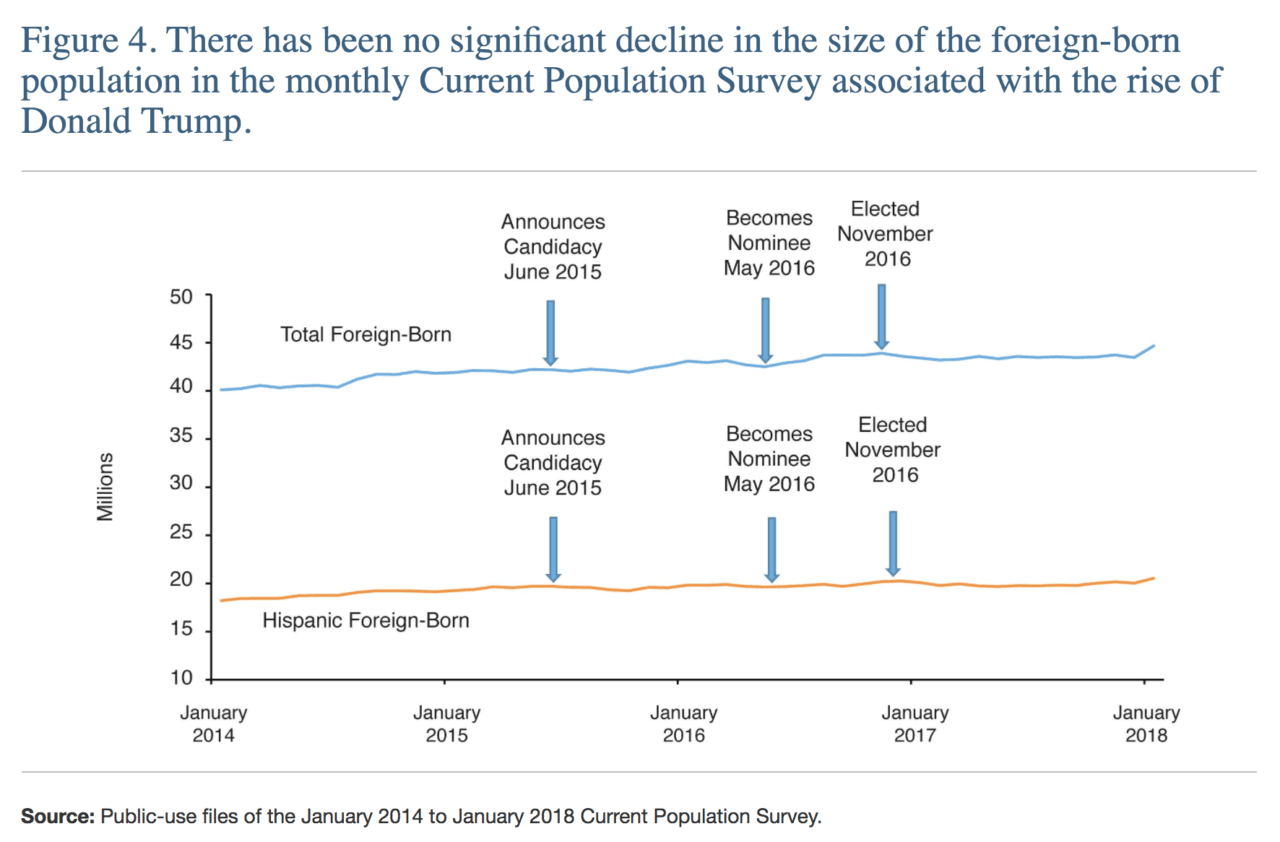 Notwithstanding,  left-wing politicians across the U.S., the former Census Bureau director under former President Obama, the mainstream media, and the open borders lobby have been relentless in claiming that to ask residents if they are American citizens on the 2020 Census will be a “tremendous risk.”

Kobach says the citizenship question is necessary to ensure that there is “fairness” in the country’s elections.

“The most important of which is we use the census to decide how to portion congressional districts and that in turn effects electoral votes as well,” Kobach told Breitbart News. “And so, we have now districts, especially in states like California — other states with a large number of illegal aliens — where instead of having 710,000 citizens, which is the average, approximate average of the congressional district size — instead of having that number of citizens in a district, you may have half of that number as citizens and half of that number as illegal aliens, which means that the citizens in that district have twice as much electoral power as you and I do. It only takes 40[,000] or 50,000 votes to win a congressional election where it takes 100[,000] or 120,000 votes to win a congressional election in the rest of the country.”

“You know the notion that, say you’re from England and you’re taking a two-week long trip, family vacation, through the United States, no one would seriously say that you should be counted in the United States census,” Kobach continued. “But that’s where we are right now. We’re counting illegal aliens and we’re counting people here on temporary visits. It’s nonsense. And if we want to have fairness in our census and fairness in the way our congressional districts are portioned, we at least need to have the information.”