During the 2016 presidential election, President Trump made a populist commitment to American workers that pro-free trade, open borders advocate Hillary Clinton was unwilling to make: Kill the Trans-Pacific Partnership (TPP) free trade agreement once and for all.

In January 2017, Trump followed through on his promise to America’s working and middle class, killing TPP and promising not to enter any multinational free trade agreements that would cost Americans their jobs.

On Thursday, though, avid free trade proponent Sen. Ben Sasse (R-NE) claimed that during a meeting at the White House, Trump said he was interested in rejoining the U.S. job-killing TPP agreement.

Re-entering TPP would break Trump’s long-held commitment to American workers, many of which are union workers who voted for Trump in the election against Clinton specifically because of his “America First” fair trade agenda. 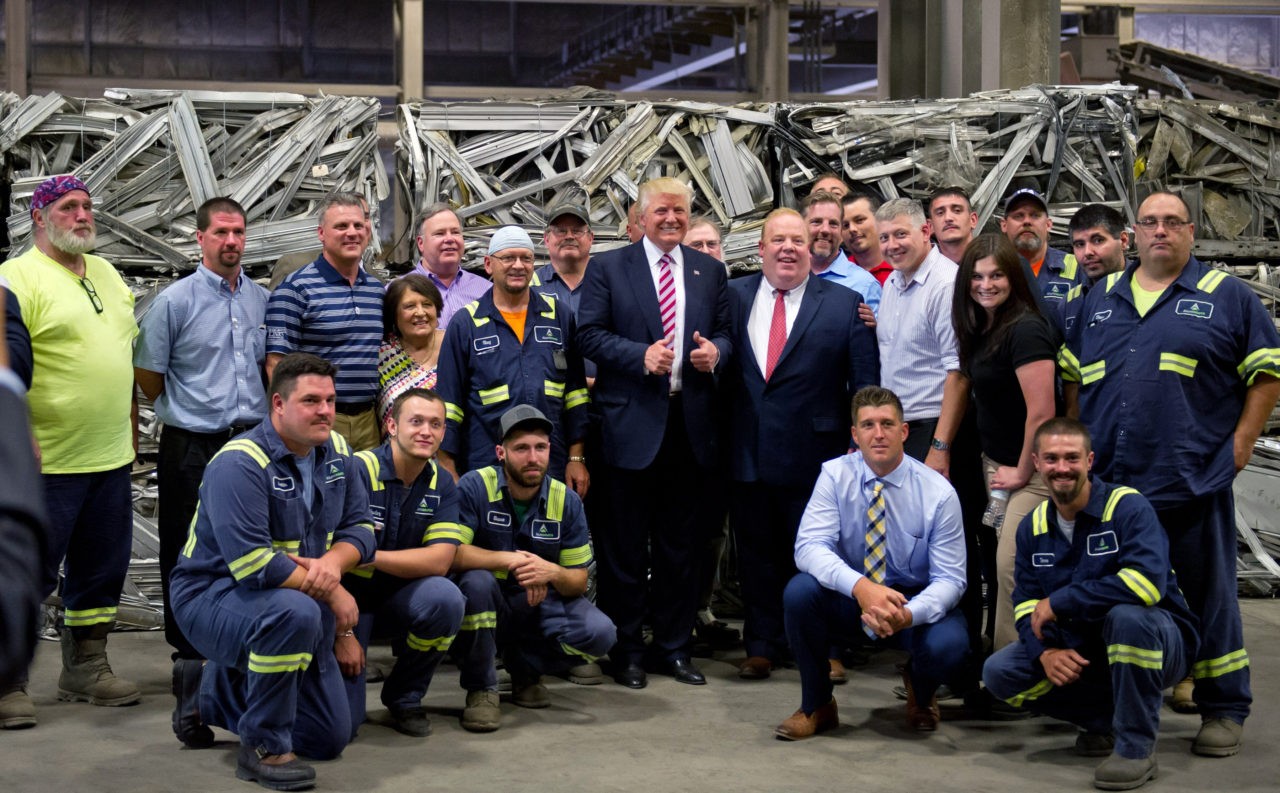 Presumptive Republican candidate for President Donald Trump gathers for a photo with employees during a campaign stop at Alumisource on June 28, 2016 in Monessen, Pennsylvania. Trump continued to attack Hillary Clinton while delivering an economic policy speech targeting globalization and free trade. (Photo by Jeff Swensen/Getty Images)

AFL-CIO President Richard Trumka, a leftist who has been supportive of Trump’s trade and immigration reduction agenda, warned the president not to re-enter into TPP, noting that it would be a betrayal to the millions of American workers who voted for Trump because he promised to leave TPP in the history books with former President Obama.

.@realDonaldTrump #TPP was killed because it failed America’s workers and it should remain dead. There is no conceivable way to revive it without totally betraying working people.

In Trump’s historic 2016 trade policy speech in Pennsylvania, the then-candidate blasted free trade agreements and globalization of the U.S. economy as coming at the expense of America’s working and middle class.

Trump said in the speech:

Skilled craftsmen and tradespeople and factory workers have seen the jobs they loved shipped thousands of miles away.

Many Pennsylvania towns once thriving and humming are now in a state despair.

This wave of globalization has wiped out our middle class. [Emphasis added]

But if we’re going to deliver real change, we’re going to have to reject the campaign of fear and intimidation being pushed by powerful corporations, media elites, and political dynasties.

TPP — before it was killed by Trump — was expected to not only eliminate millions of U.S. working and middle-class jobs but also drive down wages for remaining American workers.

Already, free trade agreements like NAFTA and KORUS have eliminated more than 3.5 million American jobs since 2001. One former steel town in West Virginia lost 94 percent of its steel jobs because of NAFTA, with nearly 10,000 workers in the town being displaced from the steel industry.

Trump’s 2016 trade promise highlighted the impact TPP would have on the U.S. manufacturing base:

The TPP would be the death blow for American manufacturing. [Emphasis added]

It would give up all of our economic leverage to an international commission that would put the interests of foreign countries above our own.

It would further open our markets to aggressive currency cheaters. It would make it easier for our trading competitors to ship cheap subsidized goods into U.S. markets – while allowing foreign countries to continue putting barriers in front of our exports.

The TPP would lower tariffs on foreign cars, while leaving in place the foreign practices that keep American cars from being sold overseas. The TPP even created a backdoor for China to supply car parts for automobiles made in Mexico.

The agreement would also force American workers to compete directly against workers from Vietnam, one of the lowest wage countries on Earth.

Should Trump push to re-enter TPP at the behest of the Republican Party’s globalist, free trade wing, his administration would likely lose ground with American workers who celebrated recently when the White House announced sweeping tariffs on steel and aluminum imports to bring U.S. jobs back to the country.

In a series of videos, aluminum and steel workers praised Trump’s tariffs, each describing how free trade had devastated their lives and communities by shipping their jobs overseas to cheap, low-wage foreign markets.

"America has also finally turned the page on decades of unfair trade deals that sacrificed our prosperity and shipped away our companies, our jobs, and our Nation’s wealth."

Century Aluminum Superintendent James Powell from Texas said imports and unfair, free trade deals were responsible for shutting down an aluminum plant that he had previously worked for, noting how the layoffs devastated his community:

“We thought we were running fine and it just came and they said, you know we just can’t sustain anymore, we’re going to be shutting the doors,” Powell said. “I had to go home and tell my wife that and pretty much you’re just hopeless. You don’t know what the next day is going to bring. You don’t know what you’re going to do. I have a family to take care of and I have no way of taking care of that family.”

Free trade, while beneficial to multinational corporations, disproportionately impacts the working and middle-class.

The Rust Belt, which Trump swept in the 2016 presidential election, has been one of the hardest regions hit because of U.S. free trade with Mexico. In total, about 700,000 U.S. have been displaced, including: