Despite recent signs of ebbing religious faith among Americans, the vast majority still believe in God or some sort of divinity, the Pew Research Center revealed in a report Wednesday.

Even among the religiously unaffiliated in the U.S. (the so-called “nones”), a significant majority (72 percent) believe in a divinity, though often not the God as described in the Christian Bible.

The Pew study sought to get a better sense of what Americans mean when they say they do or do not believe in God, since people’s understanding of God or divinity has also evolved over time, and the questions were tailored accordingly. 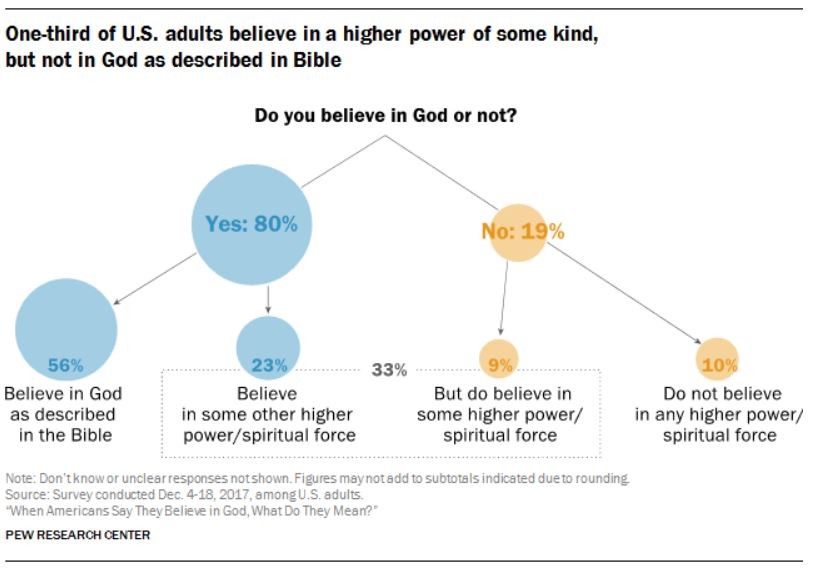 Americans who say they believe in God “as described in the Bible” generally envision an all-powerful, all-knowing, loving deity who determines most or all of what happens in their lives, Pew declared. Those who say they do not believe in the biblical God but believe in a “higher power or spiritual force” on the other hand, “are much less likely to believe in a deity who is omnipotent, omniscient, benevolent and active in human affairs,” Pew said.

Most Americans believe in a God who directly intervenes in human affairs, with nearly 80 percent of U.S. adults saying that God or a higher power has protected them, and two-thirds say they have been rewarded by the Almighty.

Around 60 percent of Americans believe in a final judgment and accounting after death, and some 40 percent say they have been punished by God or the spiritual force they believe is at work in the universe.

Pew also found that three out of four U.S. adults say they try to talk to God (or another higher power), while some 30 percent say that God (or a higher power) talks back. There was also some confusion regarding the meaning of prayer, since 39 percent of those who say they rarely or never pray report that they do “talk to God.”

Nearly three times as many Democrats as Republicans say they do not believe in any higher power or spiritual force at all (14 percent vs. 5 percent).

Politically speaking, the most irreligious group in America is composed of white Democrats.

A mere third of white Democrats say they believe in God as described in the Bible, while 21 percent do not believe in a higher power of any kind.

The Pew survey of more than 4,700 U.S. adults was conducted from December 4 to 18, 2017, and its associated report was released on Wednesday.