President Donald Trump’s deputies are debating whether to protect U.S. research by limiting the hiring of Chinese technology graduates, according to leaked reports provided to the New York Times.

Business and university groups are already mobilizing to oppose the pro-American policy, which is sought because government officials fear Chinese employees are stealing lucrative ideas and national-security technologies from their American employers at U.S. universities and companies, the newspaper reported:

WASHINGTON — It sounds like something out of a science fiction movie: In April, China is said to have tested an invisibility cloak that would allow ordinary fighter jets to suddenly vanish from radar screens.

This advancement, which could prove to be a critical intelligence breakthrough, is one that American officials fear China may have gained in part from a Chinese researcher who roused suspicions while working on a similar technology at a Duke University laboratory in 2008. The researcher, who was investigated by the F.B.I. but never charged with a crime, ultimately returned to China, became a billionaire and opened a thriving research institute that worked on some projects related to those he studied at Duke.

The Trump administration, concerned about China’s growing technological prowess, is considering strict measures to block Chinese citizens from performing sensitive research at American universities and research institutes over fears they may be acquiring intellectual secrets, according to people familiar with the deliberations.

If the proposal is approved by the Commerce Department, and ultimately by Mr. Trump, American companies and universities would be required to obtain special licenses for Chinese nationals who have any contact whatsoever with a much wider range of goods — making it harder for Chinese citizens to work on a range of scientific research and product development programs.

Many U.S. firms and laboratories hire Chinese graduate students and technical experts, partly because they are cheap. In fact, many senior American researchers in the U.S. biomedical sector rely on cheap Chinese students to accelerate drug-related research in their laboratories. This hire-cheap policy pushes many Americans — especially women — out of science careers, so pressuring U.S. researchers to hire more foreign graduates.

The federal government encourages this outsourcing process by operating the H-1B visa program. The program keeps a population of roughly 600,000 foreign college-graduates working in the United States, including roughly 100,000 visa-workers at U.S. universities. For example, the MyVisaJobs.com website shows that 23andme Inc., a gene-research company sought permission to import and hire 11 foreign graduates in 2017: 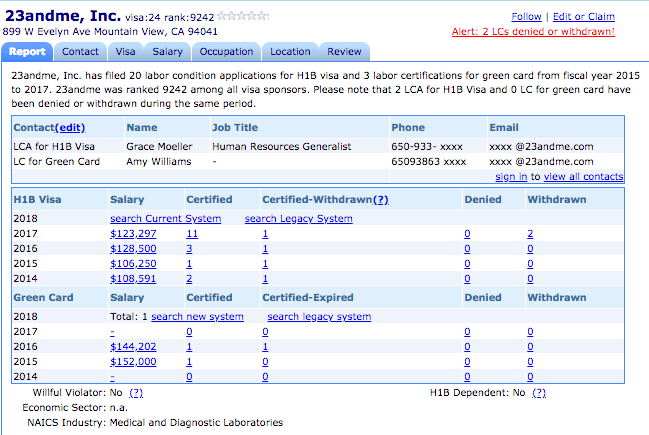 Trump’s deputies are sketching plans to reform the H-1B program, but it is strongly backed by business groups as a way to increase the supply of white-collar workers and so reduce salaries paid to Americans.

Chinese hackers are also a problem. In 2016, a Chinese man was found guilty of hacking into computers at Boeing and other aerospace companies. The hacked data included information about the U.S. F-35 and F-22 fighter aircraft.

Business groups are mobilizing to protect Chinese access to U.S. technology. For example, a Chinese group in the United States are portraying the growing concern about technology theft by Chinese companies as racism and is uring that Chinese researchers be presumed innocent until legally proved otherwise. The ethnic lobby group of Chinese in America — including immigrants and U.S.-born Americans — declared:

To target a whole group of people as being subject to greater suspicion, based purely on race and national origin, and in advance of any facts or evidence, goes against the fundamental American ideals of the presumption of innocence, due process and equal protection for all. It also fans the flames of hysteria.