A new survey of Harvard University professors indicates that 88 percent of faculty believe that Donald Trump has done a “very poor job” in his first year and a quarter as president while another eight percent say he is doing a “poor job.”

The poll, which canvassed over 1,000 professors of the Faculty of Arts and Sciences (FAS), found that only one percent of faculty believes that Trump is doing a “good job” in office, while an additional two percent think he is doing an “okay job.”

Unsurprisingly, faculty evaluations of the Trump presidency mirror almost perfectly the group’s political leanings and ballot choices in the 2016 elections. More than 80 percent (83.1) describe themselves as “liberal” or “very liberal” while a mere 1.36 percent self-identify as “conservative.”

By far the largest single group self-identifies as “liberal” 44.84 percent, while members of the second largest group identify as “very liberal” (38.32 percent). No member of the faculty considers himself/herself as “very conservative.” 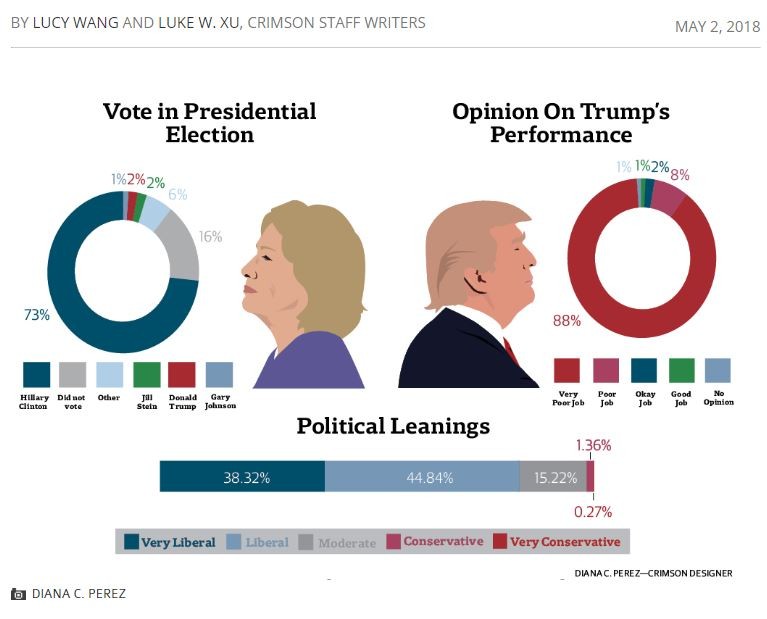 In the 2016 presidential elections, 73 percent of faculty voted for Hillary Clinton, whereas under two percent (1.92 percent) voted for Donald Trump—not far from the 1.08 percent that now believe he is doing a “good job” in office.

The anonymous, 54-question survey was conducted via email by staff at the Harvard Crimson newspaper over the course of two weeks in mid-April 2018.

According to the paper, some Harvard faculty members had a “visceral reaction” to Trump’s upset victory over Hillary Clinton in November 2016, with certain professors going so far as to cancel exams and others warning of instability in the political system.

“The politics of Harvard’s professors—falling left of center—have sparked concerns over what some call a lack of ideological diversity and the impacts this may have on teaching, undergraduate life, and research,” the Crimson notes.

An analysis of FEC filings by the Crimson in 2015 revealed that 96 percent of donations from FAS affiliates to federal campaigns and political action committees went to Democratic groups.

Remarkably, a majority of survey respondents (59 percent) reported they had engaged in a protest at least once since Mr. Trump was elected president.