The retiring Speaker offered the debate plan on Tuesday to counter the group of 20-plus pro-migration GOP representatives who are pushing for an amnesty via a discharge petition. The discharge petition would schedule a “Queen of the Hill” debate around four bills which would ensure passage of an amnesty bill for at least 2 million ‘DACA’ illegals.

Ryan also wants an amnesty, and his plan, sources said Wednesday, leverages the discharge-petition push to persuade Trump to allow his four-part package of immigration reforms to be split into a proposed amnesty bill and a three-part reform bill.

That Ryan two-bill split would allow roughly 40 business-first GOP legislators to vote for an amnesty and allow them to block Trump’s reforms on border security, chain-migration, and the visa-lottery. One source said the amnesty bill would be an add-on amendment to the reform bill — and neither measure would pass unless both won a majority.

The two-bill plan emerged from leadership efforts to manage the discharge petition, but it leaves Majority Leader Kevin McCarthy in a difficult position. 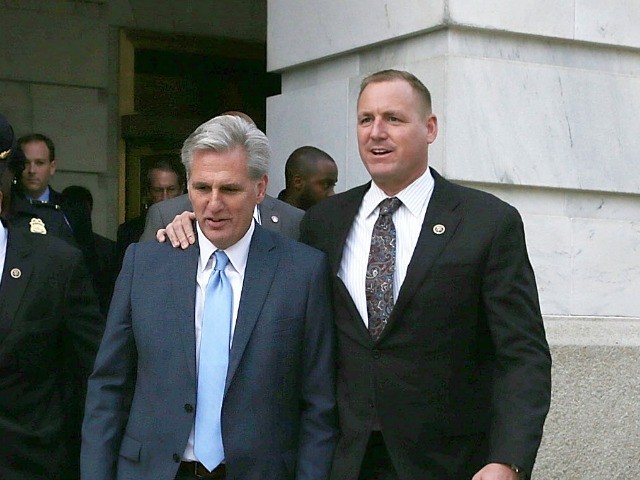 But the leaders have now recognized that Ryan’s two-bill plan creates many new problems. It alarms the growing conservative side of the caucus, it alienates the GOP’s 2018 voters, and it threatens McCarthy’s plans to quietly slip into the House Speaker’s job after Ryan’s scheduled departure in January, a source said. It also torpedoes Trump’s reform strategy by splitting the business-backed amnesty from the voter-backed reforms.

McCarthy spoke against the discharge petition push on Tuesday. According to Breitbart News:

“Our numbers are better,” McCarthy told House GOP members, per a source in the room. “If election is today we win. Will we continue to grow. But few things can disrupt us. We cannot disrupt ourselves. Intensity levels are still not there, and discharge petitions release the power of the floor that the American people gave us the responsibly to hold. When you release that power the majority goes to Nancy. If you want to depress intensity this is number one way to do it. We can debate internally but don’t let someone else like Nancy decide our future.”

The recognition that Ryan’s two-bill plan is no fix for the petition’s four-bill debate has left GOP leaders scrambling for alternatives which are acceptable to Trump, the mainstream GOP legislators and also to the pro-migration, business-first faction, the sources said Wednesday afternoon.

Ryan’s plan would gut Rep. Bob Goodlatte’s (R-VA) compromise “Securing America’s Future Act.” That bill has been endorsed by the White House because it follows Trump’s strategy of pairing popular, pro-American, wage-boosting reforms with some benefits for business, Democrats, and illegals.

Currently, the Goodlatte bill — supported by pro-American immigration reformers — trades an enforceable, small amnesty for only the roughly 800,000 illegal aliens enrolled in DACA, plus extra white-collar workers for business, in exchange for a package of immigration reforms.

These reforms include mandatory E-Verify to ban employers from hiring illegal aliens, a reduction of legal immigration by ending both the process of “chain migration” and the Diversity Visa Lottery, and also authorizing — but not funding — the construction of a border wall along the U.S.-Mexico border. Ryan has not supported any of those policies during his long career but has supported many measures to import cheap migrant workers for U.S. companies.

The Goodlatte bill also creates a new work-visa program for the agricultural industry in exchange for making use of the E-Verify program mandatory. The program would allow a resident population of up to one million, low-wage guest-workers.

Sources tell Breitbart News that Ryan’s plan is to gut the Goodlatte bill of E-Verify and the agricultural worker program, and perhaps many more features. Then, what is left of the Goodlatte bill — perhaps including the proposed elimination of chain migration and Diversity Visa Lottery — would get a House vote alongside the DACA amnesty.

The DACA amnesty will pass because of support from a group of at least 40 business-first Republicans and universal support from Democrats. But the gutted Goodlatte bill would likely be blocked — although narrowly — by the same tacit alliance of business-first GOP and pro-migrant Democrats.

Ryan’s alleged plan would nullify the current so-called “discharge petition” where pro-immigration Republicans have teamed up with Democrats to force a vote on an amnesty ahead of the 2018 midterm elections.

Other sources told Breitbart News that House Majority Whip Rep. Steve Scalise (R-LA) was the only member of the House leadership who oppose the discharge petition and Ryan’s two-bill fix.