This year marks the hundred-year anniversary of some of America’s most important battles in World War I. That makes it a fitting time to reflect on the achievements of some of the war’s forgotten heroes, including Boston’s own Charles Leo O’Connor.

From the outside, nothing much seemed to distinguish O’Connor. A lowly water tender, he held one of the dirtiest jobs in the US Navy: shoveling coal into the boilers of the USS Mount Vernon, a merchant ship that had been converted into a troop transport. But on September 5, 1918, a sudden tremor ripped through the bowels of the steamer as a German torpedo found its mark, and O’Connor showed his true nature.

The story of that fateful day is retold in a new book, The Unknowns: The Untold Story of America’s Unknown Soldier and WWI’s Most Decorated Heroes Who Brought Him Home by Patrick K. O’Donnell. Slated for release in May, The Unknowns follows eight American heroes who accomplished extraordinary feats in some of the war’s most important battles. As a result of their bravery, these eight men were selected to serve as Body Bearers at the ceremony where the Unknown Soldier was laid to rest at Arlington Cemetery.

One of those Body Bearers was O’Connor, a thirty-one-year-old, brown-haired, hazel-eyed Irish American born in Cambridge, Massachusetts. Although he stood just five-foot-nine, O’Connor weighed a beefy 212 pounds, almost all that bulk muscle amassed from five years of shoveling coal for the Navy.

O’Connor had a job only Mike Rowe could love. He spent his shifts just inches away from the hell-like blast furnaces that powered the mighty steamer, which was nearly as large as the Titanic. Sweat poured down his body, making rivulets in the encrusted coal dust that he could never fully wash away.

At 8:00 a.m. on September 5, 1918, O’Connor had just come on duty in the No. 8 fire room. Other than the rainbow which arced across the dawn sky — a sign veteran mariners considered a warning of impending doom — it seemed like just another average day.

Mount Vernon was steaming back across the Atlantic toward New York, having delivered hundreds of American fighters to France. But the ship was far from empty. A worldwide influenza epidemic was raging, and the steamer, like many others, had become a plague ship. With the soldiers trapped in tight quarters, Spanish influenza quickly spread throughout the ship, leading to grave illness or even death. Many of those who had set out on the journey to France well were no longer capable of fighting, and as a result, were now heading back home. It was up to O’Connor and the rest of the Navy crew to make sure that they made it there safely.

But that morning, a massive explosion suddenly rocked the ship. 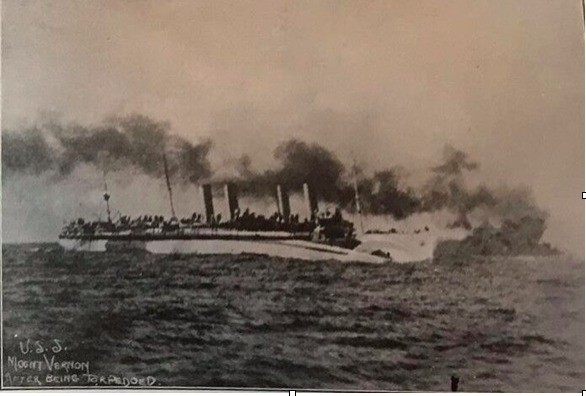 O’Connor fell to the deck, “instantly enveloped and almost fatally burned in the flame of gases driven from the furnaces.” The high pressure of the boiler room forced a sheet of fire into the compartment. As the power cut out, the overhead lights went dark. A shower of scalding coal dust and debris rained down on his head, scorching his body as the searing heat burned his throat and lungs. Before he could catch his breath, a torrent of seawater rushed into the compartment.

A torpedo had struck Mount Vernon amidships, not far from O’Connor’s position. Thirty thousand tons of metal were lifted, twisted, cracked, and bent from the explosion. Thousands of gallons of water rushed into the ship. Within minutes, Mount Vernon, sinking fast, dangerously rode ten feet below her normal waterline. Fatefully, the explosive had struck some of the fire rooms and boilers, where the stores of coal compounded the force of the blast.

O’Connor was alive — for the moment — but he knew that his chances of further survival were slim. The fire room was well below the waterline, making it extremely likely that he could drown in the flood of water at any second. Plus, the fire from the initial explosion was spreading in the dusty air of the fire rooms, leading to secondary explosions.

His only hope for escape was to get away from the boilers and stored coal as quickly as possible. 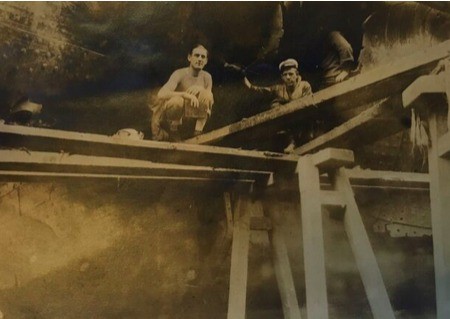 But O’Connor also knew that the lives of his fellow shipmates depended on him doing his duty. And that duty was to close the watertight doors. The fire room connected to an enormous coal bunker, and if that compartment filled with water, it would be enough to send the ship to the bottom of the ocean, not to mention drowning the men currently inside the room.

With his head reeling from the force of the concussion blast, his skin covered with painful burns, water rising up his legs and fire still raging above and around him, O’Connor blindly grabbed hold of the hydraulic lever on the waterproof door. Because the blast had twisted the metal, he had to bring all his considerable strength to bear to get the handle to turn.

In his report on the torpedo attack, the Mount Vernon’s captain wrote, “The fact that O’Connor, though profoundly stunned by the shock and almost fatally burned by the furnace gases, should have had presence of mind and courage to endeavor to shut this door is as great an example of heroic devotion to duty as it is possible for one to imagine.” Another officer added, “It is probable that [O’Connor] might have escaped from this fire room with less burns, had he immediately taken to the ladder, which was quite near the point where he stood.”

Against all odds, the crew righted the ship, fired on the U-boat to prevent another attack, contained the damage, and limped into port, all while dealing with the influenza plague. And miraculously, O’Connor survived. In recognition of his incredible devotion to duty, he received the Distinguished Service Medal. And General Pershing selected him for one of the greatest honors of all: serving as a Body Bearer for the Unknown Soldier.

It took weeks for O’Connor to recover from the disfiguring wounds that enveloped his body. When he did, he returned to work, shoveling coal to transport AEF soldiers across the sea to fight in Europe. Little is known of his life after the war, but his legacy remains as a symbol of the heroic sacrifices ordinary Americans were willing to make when confronted with extraordinary circumstances.

Photos courtesy of The National Archives

Patrick K. O’Donnell is a bestselling, critically acclaimed military historian and an expert on elite units. He is the author of eleven books. The Unknowns is his newest bestselling book. He will be discussing The Unknowns at the National Museum of U.S. Navy on Monday May 21 @ noon.  O’Donnell served as a combat historian in a Marine rifle platoon during the Battle of Fallujah and speaks often on espionage, special operations, and counterinsurgency. He has provided historical consulting for DreamWorks’ award-winning miniseries Band of Brothers and for documentaries produced by the BBC, the History Channel, and Discovery. PatrickkODonnell.com @combathistorian