North Korea responded to the United States canceling its highly-anticipated June 12 summit in Singapore on Thursday, stating despite its surprise by the move, the regime is willing to resolve any outstanding issues between the two countries in the near future.

KCNA: North Korea says Pres. Trump's decision to cancel summit in Singapore was unexpected, regime is still willing to meet with the U.S. in the future pic.twitter.com/OZj8ncDs3c

“[North Korean leader] Kim Jong Un has made utmost efforts to hold a summit with US President Donald Trump,” the statement released through state-run KCNA read, adding,  North Korea is “still willing to resolve issues with the United States whenever, however.”

President Trump’s “decision to scrap US-North Korea summit is not in line with the world’s wishes,” the statement added.

“Our commitment to doing our best for the sake of peace and stability for the world and the Korean Peninsula remains unchanged, and we are open-minded in giving time and opportunity to the U.S..”

In a letter released Thursday, Trump announced the U.S. was canceling direct talks with Kim Jong-un in response to recent rhetoric by North Korea, in which it called Vice President Mike Pence a “political dummy,” and lashed out at John Bolton after the National Security Advisor suggested the regime should follow the ‘Libya Model’ for denuclearization.

“Sadly, based on the tremendous anger and open hostility displayed in your most recent statement, I feel it is inappropriate, at this time, to have this long-planned meeting,” Trump wrote.

“You talk about your nuclear capabilities, but ours are so massive and powerful that I pray to God they will never have to be used,” the President added.

Read a copy of the full letter below: 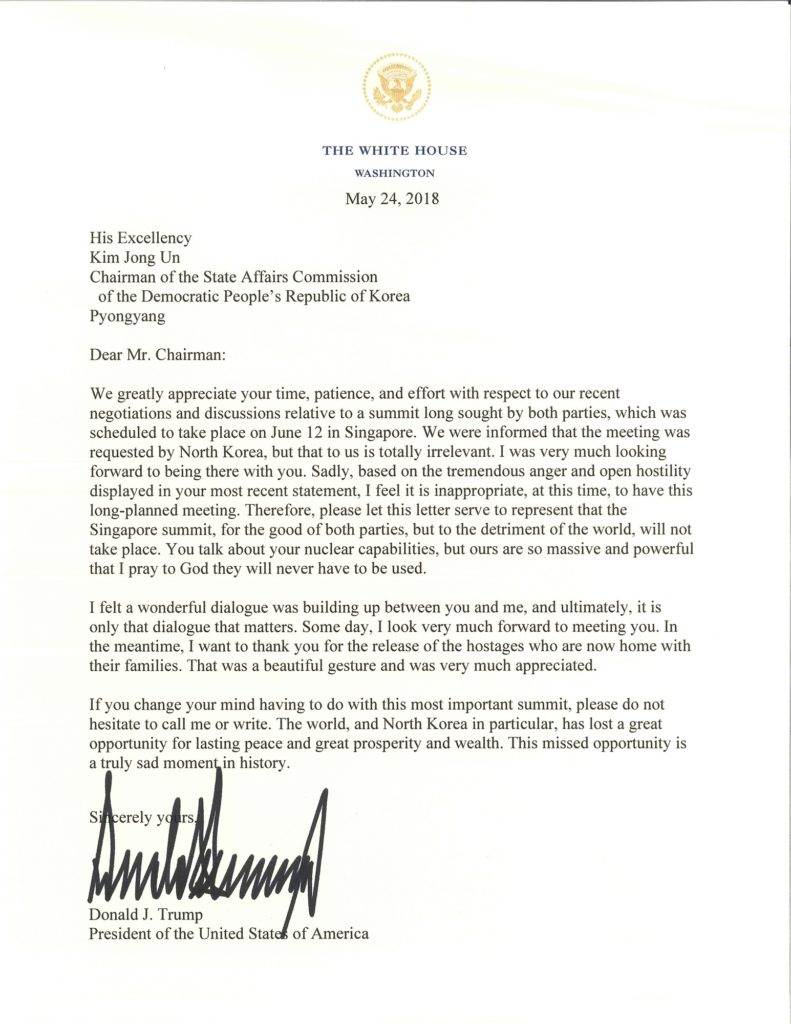