WASHINGTON, DC — More than 645,000 poppies displayed at the foot of the Lincoln Memorial for Memorial Day weekend represented the military men and women who have given their lives since World War I to defend the freedom of Americans.

The display sponsored by USAA stood on the National Mall in the midst of the Rolling Thunder XXXI First Amendment Demonstration Run and a musical and speakers tribute to veterans on Sunday. The public was given the opportunity to dedicate a poppy to fallen heroes either online or through tablets set up at the display. 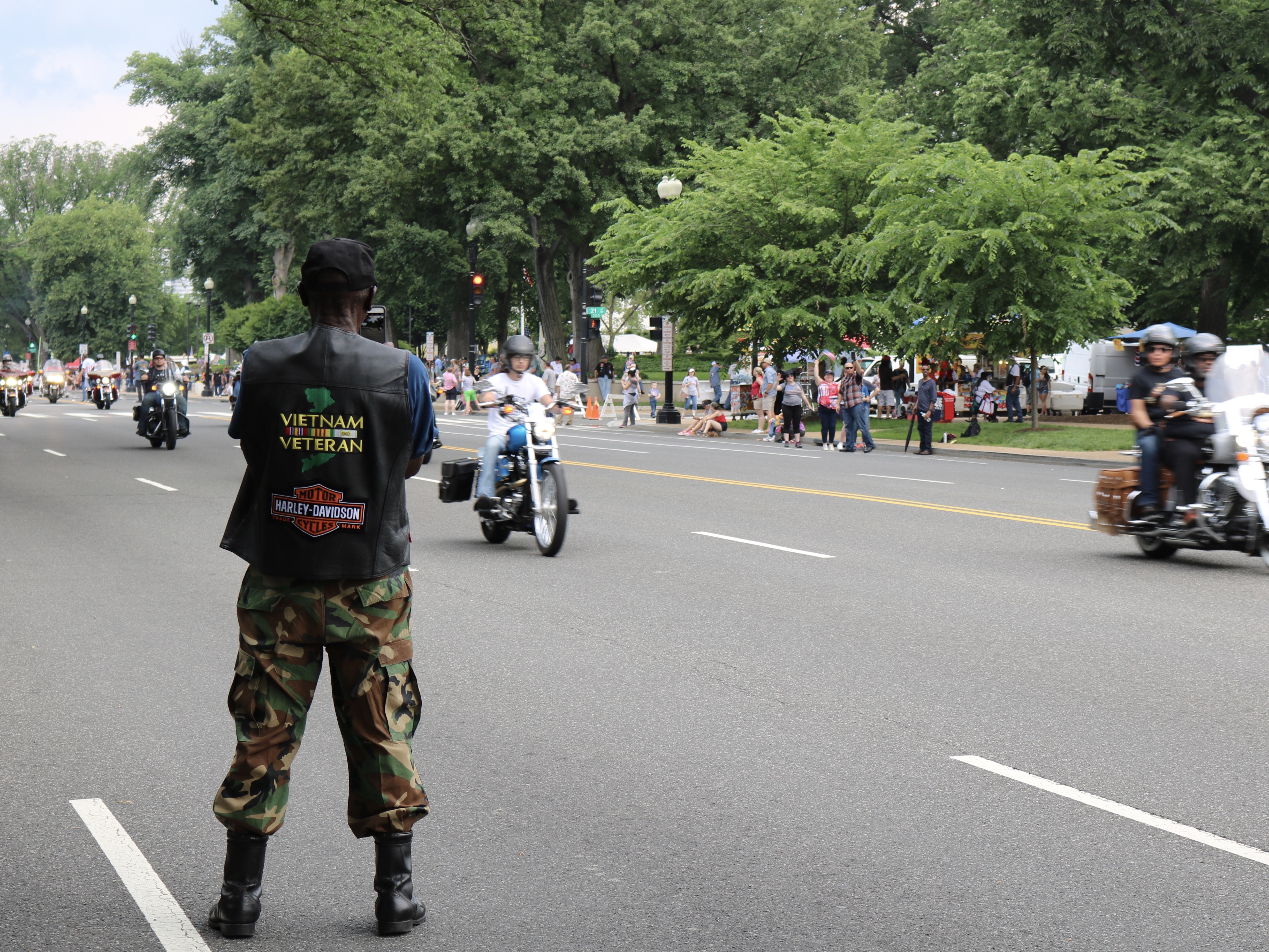 Rolling Thunder motorcyclists rally down the National Mall cheered and appreciated by many gathered along the demonstration route. (Michelle Moons/Breitbart News)

At midday on Sunday, Rolling Thunder motorcycle demonstrators cruised from the Pentagon parking lot in Arlington, Virginia, across the bridge to Washington, DC, down the north end of the Capitol Mall to the Capitol Building and back down the south side of the mall, coming to the end of their route near the Lincoln Memorial.

Next to the steps of the Lincoln Memorial where the Rolling Thunder demonstration route came to rest was the poppy memorial. After passing the screens for dedicating a poppy came a wall displaying the casualty numbers from U.S. foreign wars since WWI. More than 116,000 American military men and women were casualties of WWI from 1917 to 1918. WWII saw more than 405,000 casualties from 1941 to 1945. The wall quoted General George S. Patton, “It is foolish and wrong to mourn the men who died. Rather we should thank God that such men lived.”

The Poppy Lady, Moina Belle Michael, first wore a poppy “as a symbol of remembrance in 1918,” according to the USAA display wall. She was inspired to do so by Lt. Col. John McCrae’s 1915 poem “In Flanders Fields.” She wrote a poem in response called “We Shall Keep the Faith” in which she pledged to always wear a red poppy in honor of the casualties of WWI. The wall displayed Michael’s poem.

As those visiting the wall turned the corner to the other side they were met with a wall of the more than 645,000 poppies encased in the entire length of the wall.

Poppy Memorial on the National Mall in honor of all the fallen American military service members #MemorialDay @USAA pic.twitter.com/7nUioxyIdn

Feet away on the steps of the Lincoln Memorial and at the edge of the reflecting pool was the stage where several speakers gave messages of caring for veterans, thanking those who have served and remembering the fallen.

During one of the musical performances, the lead singer asked all of the Vietnam War and era veterans to come to stand and then to come to the foot of the stage to be recognized. He spoke of what those who served in Vietnam were told to do when returning from war in light of the sentiment back in the states toward the war, “… to take your uniform off, as these men go, they said grow your hair long when you’re gettin’ short so they don’t make fun of you when you get home.” The singer had a message to these veterans and began singing, “Thank you, I wanna thank you, from my heart and there’s a million others just like me who wanna do the same. We wanna thank you, finally say the words we shoulda said, it’s long overdue, we wanna thank you.”

As the veterans gathered at the foot of the stage they shook hands and hugged one another. Then members of the audience began rising to their feet and coming forward to shake the hands of these veterans and thank them for their service.

Rolling Thunder stage at Lincoln Memorial and Vietnam veterans asked to stand up front and be recognized…then crowd begins lining up to thank them for their service #MemorialDay #RollingThunder pic.twitter.com/OoqmZWi9Te 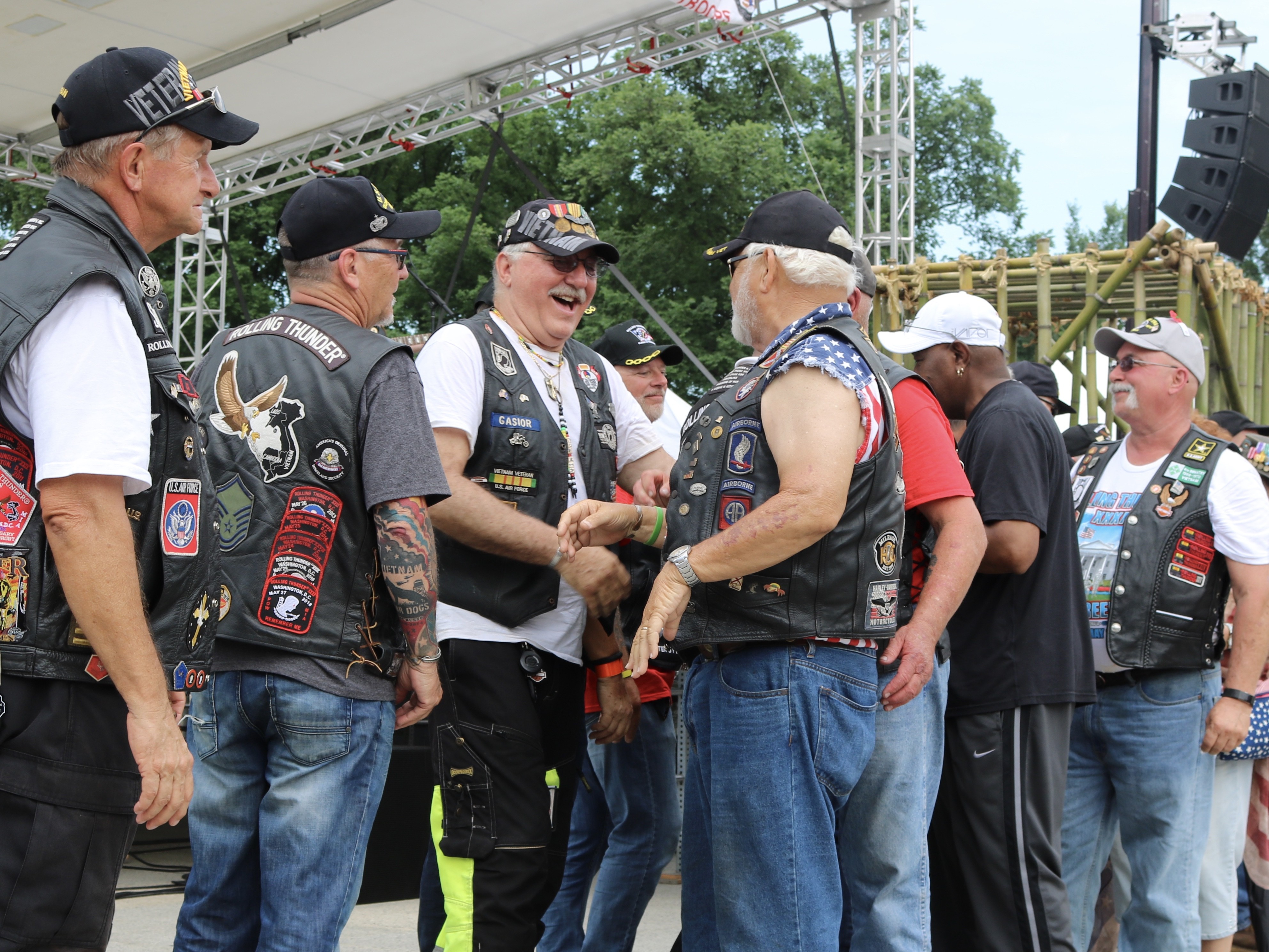 Vietnam veterans called to the foot of the Rolling Thunder event stage on the National Mall were met with thanks and handshakes from a line of attendees showing their appreciation for their service. (Michelle Moons/Breitbart News)

Spotted at the Vietnam Memorial and Vietnam Veterans Women’s Memorial nearby were several wreaths honoring including wreaths from Rolling Thunder honoring POWs (Prisoners of War) and those missing in action with the message, “We will never forget.” 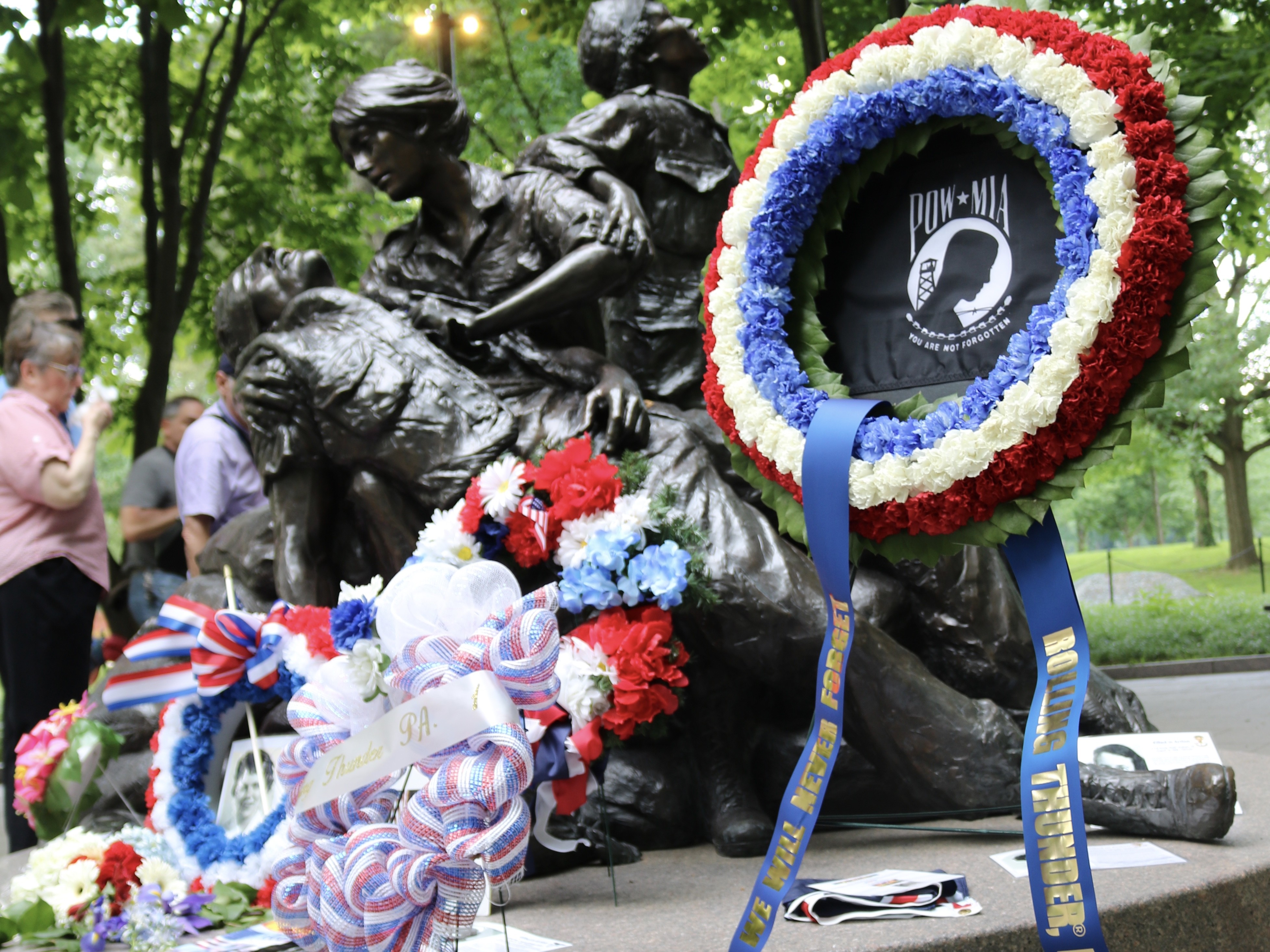 Sunday’s Rolling Thunder XXXI events also included a Sunday evening Memorial Day concert at the Capitol. Memorial Day events in D.C. scheduled for Monday are an 11 am wreath-laying ceremony at the Tomb of the Unknown Soldier at Arlington National Cemetery, National Memorial Day Parade at 2 pm, and a National Moment of Remembrance at 3 pm.

President Donald Trump is scheduled to participate in the 11 am Wreath Laying Ceremony at Arlington National Cemetery.