Administration officials are releasing thousands of migrants with young children into the United States, as required by judges, marking the return of catch-and-release policies for migrants with children.

Migrants with children are being released with ankle monitors so they can be tracked by border officials.

Officials admitted that the ankle-monitors do little to help enforcement officers find and repatriate the vast majority of the migrants who lose their asylum pleas, and that a large percentage of the first set of migrants’ children are not being reunified by their parents because of concerns about criminal activity. Also, some of those released parents reportedly prefer to leave their children with relatives in the United States to use schools and gain residency.

The initial wave of judge-ordered releases covers the migrants who brought 103 children younger than five. Of the 103, some 57 have been released and reunified with their children pending court hearings on the parents’ claims for asylum. However, 46 of the young children have not been returned to parents for a variety of reasons, including pending charges against their parents.

Officials will soon start reunifying roughly 2,000 parents with older children aged between 5 and 17, as required by judges.

Most of the migrants were separated from the children from April to June when President Donald Trump directed the end of catch-and-release for illegal migrants and asylum-seekers. This zero-tolerance policy required housing children in shelters while their parents were kept in detention until their legal claims were adjudicated. But a furious rage of protest about “family separation” by progressives and media successfully pressured Trump to release parents of children pending their legal claims.

The reunification of the parents and children has highlighted several difficult issues, such as the useless of ankle bracelets.

“On those individuals which we are required to release pursuant to the court order, generally, they will be placed on ankle bracelets to provide us a higher level of monitoring of their activities once they have been released,” said Matthew Albence, the Executive Associate Director of enforcement division at the U.S. Immigration and Customs Enforcement agency. He spoke via phone at a July 10 press conference:

The use of the ankle bracelet is a tool which we use to hopefully encourage compliance from the individual that has been released to appear for their hearings … It has been effective with regard to ensuring appearance at hearing and meetings. It is not an effective removal tool. While we have a large number — over 80,000 — of individuals on [ankle bracelets] last year. That led to barely more than 2,400 removals, so it is not an effective removal tool, it is merely used to gain compliance with individuals going through the court process.

The ankle monitors are not a good substitute for detention, said Andrew Arthur, a former immigration-court judge who now works with the Center for Immigration Studies. He said:

The revived catch-and-release policy is being enforced by judges, said Arthur. “Given the Ms. L. [case] and the Flores settlement, I’m not sure how they would be able to detain family units for more than 20 days,” he said.

As U.S. Customs and Border Protection (CBP) statistics reveal, the number of UACs and family units apprehended by the agency entering illegally plummeted after the inauguration of President Trump, falling from a high in FY 2017 of 22,934 (in November 2016) to a low of 2,115 (in April 2017). I wrote about this so-called “Trump effect” in a May 2017 post. In a September 2017 follow-up, however, I noted that that effect appeared to be waning. That month, 7,152 UACs and family units were apprehended by the Border Patrol, according to CBP…

The administration’s efforts to stem the flow of aliens entering the United States illegally were beginning to have an effect by June 2018, when Border Patrol arrested 34,114 aliens along the border (a 15 percent decrease over the month before), including 5,115 UACs (an almost 20 percent decrease) and 9,449 family units (a slight decrease).

Agency officials can appeal the two legal decisions requiring catch-and-release, said Arthur. But that legal process would be slow because the Supreme Court will not return until October.

However, the inflow of migrants with children may be quickly reduced by new policy guidance from Attorney General Jeff Sessions, Arthur said.

The new guidance makes clear that asylum law does not allow migrants who claim a “credible fear” of persecution by criminal gangs or violent spouses to file for asylum. It is “ very important because right now the grant rate for credible fear is 75 percent to 90 percent, and most of the people going through are claiming they will be harmed by criminal gangs or domestic abuse,” Arthur said.

“Assuming the guidance is faithfully adhered to, it would reduce the number of positive claims,” he added.

Migrants who enter the country illegally without children will be covered by Sessions’ zero-tolerance prosecution policy. That policy means single migrants are being processed en masse in courts and are quickly sent home.

But migrants can ask to apply for asylum even if they are caught sneaking across the border. That legal process takes longer than the 20-day limit set by judges for the shelter of children, allowing migrant who bring children to trigger catch-and-release.

Sessions’ credible-fear reform may reduce the inflow of parents with children to the point that nearly all can be kept in DHS-run family detention centers without catch-and-release.

The first parents released by the judges are the claimed parents of the 103 children under age 5. Of those, 57 have been released and given custody of their children.

The group includes a journalist from El Salvador, Jose Demar Fuentes, plus Olivia Caceres and their two young children, one-year-old Mateo and five-year-old Andree. Their story, according to KPBS station, is that:

Caceres entered the U.S. with Mateo’s brother, Andree, now age 5, about a month after Fuentes and Mateo asked for asylum at the San Ysidro Port of Entry. The family had traveled across Mexico together, fleeing violence in El Salvador. They split up when Mateo began to show signs of dehydration. Caceres said the couple was in a rush to get their youngest son somewhere safe …

Fuentes gave KPBS an interview from the detention center, and broke into tears multiple times when discussing his sons. Fuentes said he grew up without a father, and that there was nothing more important to him than being a present and involved parent.

Twenty-two of the 46 children could not be reunited “due to safety concerns posed by the adults.” A July 12 statement said: 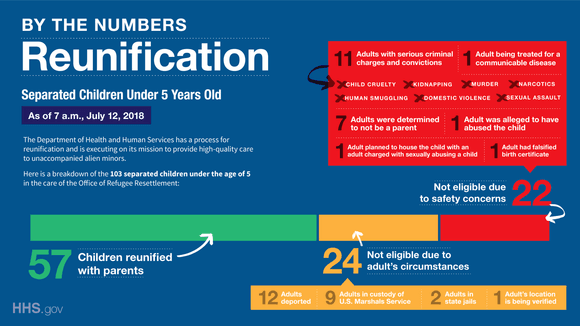